Car makers have increased their take up of hot stamping, a technology once considered a novelty 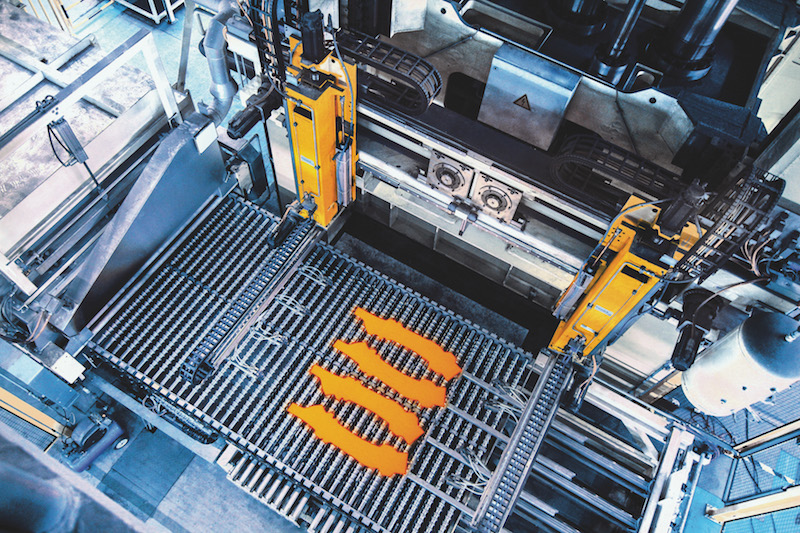 The use of hot stamping forming technology has skyrocketed in recent years as OEMs look to produce lightweight ultra-high strength steel (UHSS) components for the body structures of their high-volume vehicles. Christian Palm, the head of product management for hot stamping at machinery supplier Schuler, says: "The benefits that come with hot stamped parts – greater rigidity and less weight – have led to a dramatic increase in their production around the world; compared to around 8m pieces in 1997, the figure had already reached 124m by 2010. At the end of last year, around 360m parts have been produced." While this growth may be poised to plateau somewhat, OEMs, their tier partners and press manufacturers such as Schuler are developing a multitude of innovative hot-stamped components, particularly for use in safety-critical applications.

Developed in the 1970s in Sweden, hot stamping was first used in the automotive industry by Saab Automobile AB in 1984. Using the process, a blank – usually made from boron steel – is heated in a furnace to its austenitisation temperature of around 900°C, formed in an internally cooled die set, and quenched under pressure at a minimum cooling rate of 27°C per second. This minimum cooling rate ensures the formation of a martensitic microstructure in the part, imparting high strength – which can be in excess of 1500 MPa. This means that it is possible to construct components with thinner gauges of steel than would otherwise be possible. Further, parts with complex geometries can be produced without the problem of spring-back.

The technology has been used to good effect by Volvo in the second-generation of its XC90. The carmaker uses hot-formed boron steel to produce the vehicle's passenger safety cage and the material amounts to around 40% of the XC90’s total body weight. At the time of its launch, the senior technical specialist for safety at Volvo Cars Safety Centre, Lotta Jakobsson, said: “This is approximately five times more than the first-generation XC90. To our knowledge, this high usage of high-strength steel is unique compared with our competitors.”

As a result, the second-generation XC90 is 22kg lighter than its first-generation counterpart, despite being significantly larger, possessing improved safety features and demonstrating better noise, vibration, and harshness (NVH) performance. Furthermore, the XC90 has been given a 2016 Top Safety Pick+ award from the US Insurance Institute for Highway Safety (IIHS), which rated the vehicle ‘good’ for its performance in the small overlap front, moderate overlap front, side, roof strength and head restraint tests, and ‘superior’ for front crash prevention.

Steel makers are currently developing stronger grades of UHSS that will allow carmakers to do even more with less material. The executive vice president of global automotive at steel maker ArcelorMittal, Brian Aranha, says: “Future developments will also take advantage of laser-welded blanks [LWBs], composed of two or more flat steel sheets. These sheets can have different thicknesses, coatings and be made of different alloys.”

Fastest growing segmentThe use of these blanks ensures that the right material is used in the right place in the component, and helps to minimise the number of subsequent joining operations required. The president of LWB producer TWB Company, Ivan Meltzer, says: “TWBs for hot-stamped applications is the fastest growing segment in our tailored product category. There were only three applications in production in North America in 2015. We expect around 25 applications by 2019.”

One of these applications was seen on the 2014 Acura MDX SUV, which featured the first hot-stamped continuous door ring in the global automotive industry. Versions of this technology have since been used on Acura's 2015 TLX and Honda's 2016 Pilot. Designed by Honda and stamped from ArcelorMittal’s Usibor 1500 by Cosma International, the MDX door ring was almost 4kg lighter than the version employed on the previous model. The door ring on the 2013 Acura MDX was made from four components spot-welded together. The use of laser-welded blanks for the 2014 model eliminated the need for these joints, improving load transfer in the component and increasing its strength.

The use of hot-stamped TWBs presents a number of opportunities according to Meltzer: “We are seeing significant changes in both design and application for tailored products, and we expect those changes to continue to expand. For instance, a significant number of our applications are now mixed material, as opposed to simply dissimilar gauge. We are also seeing a proliferation of parts designed for chassis applications, where historically our product was limited to the body in white.“With the expanding steel grades offered, safety and light weighting OEM engineering teams can tailor sections of nearly every part. We have and will continue to make investments to handle the various types of parts that benefit from mixed materials and thickness changes.”

The use of TWBs is not the only method for tailoring the strength of a component in localized areas. The use of tailored tempering processes enables the hot forming of components with precisely defined zones of varying strength or ductility—in one working step. Honda and Gestamp have used such a process to develop a hot-stamped rear frame for the 2016 Honda Civic that weighs 20% less than its counterpart in the previous Civic.

Reducing weightAround 59% of the body of this latest Civic is made of high-strength steel – the highest in the car's history – reducing unibody weight by 21kg (68 pounds) compared with the previous-generation Civic. Around 14% if the new Civic's body comprises UHSS, again the highest in Civic history. The material is employed in the B-pillars and the rear frame. The rear frame features soft zones that allow it to absorb impact energy in the event of a crash. For this development, Honda and Gestamp received an Automotive Excellence Award from the Steel Market Development Institute (SMDI) in May 2016.

Development for this part started in 2013 with Honda in Japan, and then shifted to North America in 2014. In designing the rear frame, the Honda team wanted to achieve three-point bending during a rear crash, while also reducing the weight and the complexity of the component. Shawn Crichley, a principal engineer at Honda R&D Americas, says: "The application of hot stamp material was the best opportunity to achieve the target. Traditionally hot stamp material has not been used in these areas due to it's less predictable crush performance.

"The ability to create soft zones in the part was the catalyst for realising the target. They are strategically placed, based on many [computer-aided engineering] CAE iterations, to establish consistent three-point bending during the column loading of the rear frame."

Conventional rear frames are multi-piece constructions cold stamped from steel with a tensile strength 590MPa, with internal frame stiffeners placed in such a manner as to control energy absorption during a crash. With the tailored soft zones, those patches and internal stiffeners are no longer needed. Gestamp's director of research and development for body-in-white in North America, Paul J. Belanger, explains: "The technology of employing controlled cooling to achieve soft zones in the finished part, and specifically in the case of the Honda Civic rear frame members, in positioning the soft zones in alternating side locations, is unique to the industry. 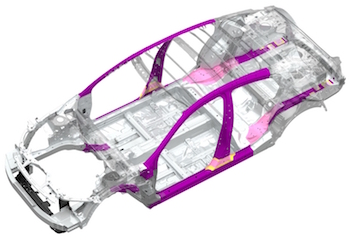 “This soft zone ‘snake’ design allowed for a reduction in product complexity, and provided a more efficient, repeatable solution."The rear frame members are manufacturing using a traditional hot stamping process, where an aluminium silicon-coated carbon-manganese-boron steel (22MnB5) steel is heated to austenitisation temperature, then formed and quenched in a one-step stamping operation. Belanger says: “Die modifications were made to introduce specific areas of thermally stabilised tool sections, allowing for differential cooling rates, and as a result, different microstructures so that a softer ferrite phase of steel is formed.”

The presses were manufactured by Loire Safe, a division of Gestamp. Crichley says: "Because the hot stamp material is so much stronger than the 590MPa steel, we were able to achieve better performance with reduced gauge. Additionally, the soft zone technology delivers a highly repeatable three-point bend mode, which helps controls energy better than previous designs.

"Finally, with the tailored hot stamping, we do not need additional complexity and weight of stiffeners and spot welds to achieve the desired frame crush mode."

So what of the future of hot stamping? Palm is bullish: “In the future, the percentage of structural auto body parts that will be hot stamped could rise to between 30% and 40%. At the moment, there are around 300 hot stamping lines in operation worldwide. This number will increase steadily in the next years.”

Belanger points out that during the last four to five years, the number of hot-stamping lines worldwide has increased yearly by 15% to 20%. He says: “The tendency is that the market will continue to grow until 2020, but perhaps at a slightly slower pace.” Meltzer agrees: "Certainly we don’t anticipate the hot formed applications to continue to grow at that exponential pace, but [they] will likely be used across all OEMs and product lines for the foreseeable future.”