Reduced costs, recyclability and new joining technologies are driving the use of aluminium in automotive structures

Ford's switch from steel to aluminium for the body of its F-Series trucks was called its ‘billion-dollar gamble’. But the carmaker felt that the opportunity to shed some 300kg of weight from the vehicle was a risk worth taking, given the increasingly stringent Corporate Average Fuel Economy [CAFE] regulations in the USA.

Some three years later and, while there have been ups and downs, it seems that Ford’s strategy has been highly successful. Certainly, sales numbers back this up. Earlier this year it reported that it had sold 820,799 F-Series trucks in 2016, making it the USA's best-selling vehicle for the thirty-fifth consecutive year and the best-selling pickup truck for 40 years straight.

Aluminium now an established optionThe F-Series has also been a game changer for the aluminium industry. Sapa supplied extrusions for the F-150. Its vice president of Commercial in the USA, Jack Pell, says: “Ford's F-150 is becoming 'old news' now and has certainly served our industry well. Not only has the new aluminium F-150 sold very well, it has established aluminium sheet and extrusions as a legitimate option in mainstream vehicles."

Constellium's managing director for Automotive Structures, Lionel Chapis, concurs: "The fact that the new aluminium-intensive Ford F-Series has been a big commercial and technical – in terms of crash performance – success on the market will certainly help the industry to realise that aluminium is not a solution only applicable for niche cars, but also for high-volume series cars, trucks and SUVs. In other words, if it works for the Ford F-150, then it will work for every vehicle."

While the F-Series is currently unique in the mass-market for its extensive use of aluminium, other OEMs in the USA are adopting the material for their higher-end vehicles. Aluminium accounts for 64% of the body structure of the Cadillac CT6, while the Lexus RX has become Toyota’s first vehicle in North America to feature aluminium exterior panels prominently.

It’s boom time for producers of the lightweight metal. According to Constellium, the use of aluminium automotive body sheet in North America increased from 70kt in 2012 to approximately 500kt in 2015 and will reach more than 1,000kt in 2020. Since 2013, the Aluminum Association estimates that its member companies have invested more than $2.8 billion in plant expansions in the USA.

In Europe, where mass-market vehicles tend to be smaller, the adoption of aluminium has been slower and steadier, but still significant. Demand for the material is also starting to increase in China.

The benefits of using aluminium in cars are well known. Using the metal, parts can be made up to 50% lighter than if they were made from steel, and it demonstrates high strength and energy absorption characteristics. Further, as demonstrated by Ford and Jaguar Land Rover, aluminium is highly recyclable.

SUVs, EVs and hybrids will drive demandAccording to a Ducker Worldwide study prepared for European Aluminium, the average car in 2016 features around 150.6kg of aluminium, with castings accounting for nearly 50% of that weight. The study predicts that aluminium content per vehicle will continue to grow to nearly 170kg in 2020, and to around 190kg by 2025. The use of aluminium body sheet is expected to increase by 110% over the next 10 years.

Chapis says that much of this growth will come from SUVs (for which there is increasing consumer demand), light trucks, and D- and E-segment cars.Further, he continues, "the volume increase of hybrid and fully electric vehicles [EVs] is expected to significantly change the use of aluminium, due to further weight and crash issues linked to the storage of lithium-ion high-density batteries in this new type of car.”

Batteries used in EVs can weigh several hundred kilogrammes. There has already been significant activity in this area. For example, in March this year Novelis signed an agreement with Chinese premium EV manufacturer NIO to provide aluminium for the structural parts of its SUV models. These will be launched over the next five years.

However, the cost of aluminium remains an issue. It is some 2–4 times more expensive than steel, depending on who you talk to. OEMs are prepared to swallow some of this extra expense for the benefits aluminium provides, and aluminium producers are working hard to develop stronger and more formable alloys – allowing carmakers to do more with less.

Keeping pace with rapid changeIndeed, Chapis says that a key challenge is “keeping up with the pace of change in the auto industry, which is very different from the traditional aluminium markets, which were packaging and building.”

To help it in this goal, Constellium opened its University Technology Centre (UTC) at Brunel University in London in 2016. This facility is now integrated with the company's development activities in Europe and North America, and Chapis claims that it has helped Constellium reduce development times for aluminium alloys and structural components. The UTC features industrial-size casting and extrusion equipment, and this year rapid prototyping technology will be installed that could reduce development times for aluminium alloys by at least 50%.

"Not only has the new aluminium F-150 sold very well, it has established aluminium sheet and extrusions as a legitimate option in mainstream vehicles" - Jack Pell, Sapa

John Thomas, Arconic's director of Global Marketing, Automotive, says: “We're not resting on our laurels and using the same alloys that we have for the last twenty years; the 6022s – which we invented – the 6211s, those types of alloys. Not only are we developing alloys for our conventional processes, we have won a R&D 100 Award in 2016 for our Micromill technology.”

Arconic claims that Micromill, which it unveiled in 2014, reduces the production time to create rolled coil from hot aluminium from 20 days to 20 minutes. Thomas explains: “Instead of going through an ingot phase, you basically take it from molten metal right to a sheet instantaneously.”

Arconic claims that the process dramatically changes the microstructure of the metal, increasing formability by 40% and strength by 30% compared with incumbent automotive aluminium. This strength and ductility means that parts constructed of multiple pieces can now be manufactured as a single part ¬– reducing complexity and assembly time.

Ford started to use Micromill in the 2016 F-150, and has established a joint development agreement with Arconic to develop aluminium alloys using the technology.

The company has recently opened an R&D centre in Detroit, close to its OEM customers in the USA. Rafael Fuertes, the company's executive vice president of Innovation and Strategy, says that working with OEMs “at an early stage is crucial to get the best solution in terms of technology and cost position, both for our customers and Sapa."

Innovations in joining technologiesHowever, the increasing use of high-strength grades presents a number of challenges in terms of joining technologies, according to the director of Aluminum Welding Technology at Lincoln Electric, Frank G. Armao. Joining aluminium to aluminium using welding technologies has always been problematic. Ford avoided them almost all together, investing heavily in mechanical fixing methods and adhesives.

Most high-strength alloys are heat treated, and are over-treated by the heat of any fusion welding process – resulting in a significant loss of yield and tensile strengths. Armao says: "For the most part, this problem is caused by the aluminium base materials themselves, so little can be done about it. However, there are a few innovative fabricating sequences that can be used to produce post-weld strengths of 85% of the pre-weld strength. Lincoln has developed several of these, which are now patent-pending, but will be used commercially in the near future." 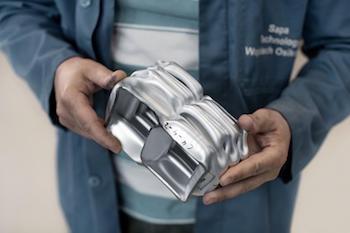 Aluminium parts can be 50% lighter than those made from steel, and demonstrate high strength and energy absorption characteristics

Lincoln has also been working with pulsed gas metal arc welding (GMAW) to enable the joining of the increasingly thinner sheet materials employed by OEMs. Armao continues: "We have developed many advances in pulsed GMAW over the years in order to reduce the weld heat input so that thinner-gage aluminium can be welded.

“Most recently, we have developed a unique variant of AC GMAW, which significantly lowers heat input during welding without affecting productivity. This new process has been used on materials as thin as 0.6mm and as thick as 4–5mm."

Joining aluminium to steel – key as the use multi-material structures become increasingly common – throws-up a whole new set of challenges for any joining process that melts these materials. Getting aluminium and steel to fuse is difficult since the former's melting temperature is much lower than that of the latter’s, meaning that a braze joint is formed rather than a weld. Further, aluminium forms intermetallic compounds with almost every other metal during fusion processes. These compounds are usually brittle and often have comparatively low melting temperatures, leading to a joint that exhibits poor mechanical properties.

For these reasons, Armao does not believe that fusion-welding processes are suitable for joining aluminium to other materials. A better approach, he says, is to use solid-state welding processes, such as friction stir welding (FSW). This process produces fusion by causing large amounts of physical deformation in the aluminium and steel. Armao continues: "While there is ideally no melting, frictional heat is produced, which means that there is a degradation in mechanical properties, although less degradation than when using GMAW. There are also new processes based on magnetically impelling the two materials together – sort of a similar process to explosive welding except that the impulse is generated using magnetics – which show great promise.”

Among other technologies, Arconic is developing Resistance Spot Riveting (RSR) for joining dissimilar materials. Thomas says: “It's a multi material world. Our OEM customers are saying it. Even our steel competitors are saying it. We know that not everyone is going to go with an aluminium-intensive, F-150-type of vehicle; it's just not going to happen. But where they do use aluminium, we want to make it easier for them to do so."

As its name suggests, the technology combines resistance welding with riveting, and the company claims that it allows for the flexible joining of various combinations of automotive materials and results in joints that are 10–20% stronger than those produced with competing technologies, such as self-piercing rivets (SPR) and flow drill screws (FDS). RSR can be used join ultra-high strength steel to aluminium, steel to magnesium, steel to composites, and high-strength aluminium to itself. The RSR rivets produce no back protrusion for a smoother surface than is possible using SPR and FDS.

Notably, RSR has been designed to require minimal modification to existing production lines, reducing the capital investment necessary to transition to the use of multi-material vehicle architectures. Conventional spot welding equipment and robots can be adapted for use with the technology, which could see commercial use by 2018.

Future challengesOther challenges exist. The Trump Administration’s planned rollback of fuel economy standards in the US could lessen the need for OEMs there to reduce the weight of their vehicles. However, Constellium’s Chapis points out that twelve states have adopted California's stringent vehicle emission standards. Further, a number of states are adopting California's Zero Emission Vehicle (ZEV) programme for EVs, which – as we have seen – is a big growth area for aluminium.

Indeed, Nunzio Cuppoletta, Sapa's director – Market Sector Automotive, says that predicting when the boom in EVs will come is one of the aluminium industry's biggest issues. He continues: "There is no doubt that e-mobility will take off and impact our industry in a positive and sustainable way, [but] regarding the forecasted build rates, we are still not that precise in the automotive industry and that could lead to challenges in terms of investments and planning."

It seems that in future, no one material will dominate the automotive market, but aluminium will be key part of the mix.