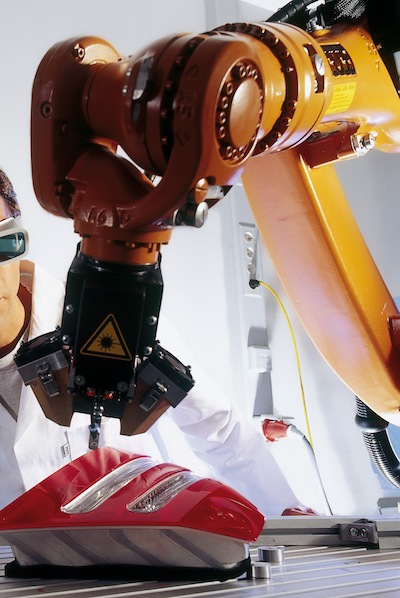 A recent report released by Credence Research suggests that the US welding equipment industry for plastics is undergoing a period of explosive growth. The industry was valued at $595.3m in 2015, and the latest report forecasts this will increase to nearly $840m by 2023. These figures are sure to raise a few eyebrows around the automotive world, but not among those who know the benefits this technology can provide, particularly for those using laser-based processes.

With any type of friction weld – vibration, ultrasonic or RF – welding ribs are something that designers and manufacturers have learnt to live with as a trade-off to making attractive, translucent plastic components. Or so says LPKF, a specialist in laser-welding systems for plastics. Clearly this is not desirable on modern taillights, for example, which are often designed with large, double curves that wrap around the back and sides to give cars a sophisticated look.

Among the advocates of LPKF’s welding technology is Alfmeier Präzision AG in Treuchtlingen, Germany, which has been using the company’s solutions to produce plastic components since 2003. One of Alfmeier’s production lines produces around 9m float components, for aeration and ventilation valves for fuel management systems, every year. This line is supported by another producing butterfly valves. In total, Alfmeier has welded together well in excess of 1 billion components using LPKF laser systems.

“Laser technology has proven itself time and again in our production activities,” says Uwe Neumann, head of central maintenance and industrial engineering at Alfmeier. “It’s a very quick process with welding times of between 0.5 and 4 seconds. In addition, it works cleanly, is very flexible and provides us with all the data we need for our quality assurance.”

A further new development from LPKF is the PowerWeld3D 8000 laser welding system for large 3D plastic components measuring up to 1,000 x 750mm. Notable is the ability to handle height differences of up to 400mm in the Z-axis, as well as monitoring the welding process with an integrated melt travel device.

The system is designed for the high-speed series production of large automotive components: A, B and C-pillars, bumpers, sunroofs, as well as the flagship tail light application. Its core innovation is ‘wobble welding’. In this quasi-simultaneous technique, the laser beam is deflected orthogonally to the feed direction to produce additional amplitudes. This supports the easy creation of weld seams with widths of between 1-5mm. Furthermore, the company says the system also delivers very homogenous temperature distributions, resulting in short cycle times and a robust process.

Heat, melt and joinAnother innovation designed for the high-speed laser welding of large plastic automotive parts with complex geometries is the recently launched GLX-3 from Branson Ultrasonics. The system is based on the company’s patented Simultaneous Thru-Transmission Infrared (STTIr) process, which heats, melts and joins the entire weld line of two or more parts simultaneously.

Compared with scan or trace laser-welding processes, which must travel the entire length of the weld line to accomplish heating, STTIr can deliver cycle times as fast as 0.5-5 seconds on weld lines of 2,000mm in length, depending on part material and geometric complexity.

Globo welding works along the lines of contour welding. A laser beam is focused at a point on the joining plane via an air-bearing, frictionless, freely rotating glass sphere. The glass sphere not only focuses, but serves as a mechanical clamping tool. When the sphere rolls on the component, it applies continuous pressure at a point on the joining plane. This ensures that the laser beam is only incident at the point at which contact pressure is also applied.

The process creates a minimum thermal load on the parts to be welded and provides simple geometry for the seam, says the company. Almost all thermoplastic plastics and thermoplastic elastomers, including ABS, PA, PC, PP, PMMA, PS, PBT and reinforced fibreglass can be welded in a single set-up.

Melting pointThe choice of material is also a major factor in the success of the welding operation. Plastics of the same composition can be joined to each other easily enough. However, different plastics need to be chemically and physically compatible, and have melting temperature ranges that overlap sufficiently.

Before and after welding some components, such as bumpers, airbag covers, switches, etc., need cleaning to remove dirt, grease, oils (including fingerprints), dust and releasing agents from the moulding process. Linde Gases has developed a cleaning method, called CryoClean that uses liquid CO2 that is accelerated by pressurised air to produce CO2 ‘snow’ particles. The kinetic energy of the solid CO2 particles, the embrittlement of the contaminant and the sublimation effect of the solid CO2 generate the cleaning effect. Linde says this method offers a high level of predictability with a reduced defect rate in comparison with water/solvent-based cleaning. It is also fast. In the case of plastic bumpers, cleaning time has come down to less than one minute, which the company says reduces cost and waste compared to traditional cleaning methods.The CO22 is essentially ‘borrowed’ or ‘recycled’ as Linde captures and extracts CO2 from the by-products of existing combustion or chemical processes, then purifies and upgrades it. 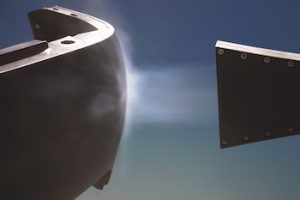 Linde Gases’ CryoClean method uses liquid CO2 that is accelerated by pressurised air to produce CO2 ‘snow’ particles
Among the main factors that can help in this regard is adequate power control, particularly in transmission-based laser-welding processes. Transmission welding requires a transparent (to infrared range light) upper part and an absorbing (to infrared range light) lower part, held with consistent, tight contact to each other. The beam passes through the upper layer to heat the lower. As the lower plastic reaches melting temperature, the heat is passed to the transparent upper plastic. When both are at the melting stage, a weld is achieved at the interface.

For transmission welds to occur, both plastics must have similar melting ranges, and the critical factor is the precision of the temperature generated in the workpiece by the laser beam. If the aim is to weld specific close contours such as acute-angle corners, there can be scorching at the seam because heat accumulates and overlaps in the confined space. This causes temperature to rise, resulting in burns that reduce seam quality.

In theory, the solution to the problem is simple: keep the temperature constant in the corner contours while the laser power output is deliberately reduced. In practice, however, this can prove tricky.

With this in mind, Trumpf has developed its PFO20 welding optics with live temperature monitoring. Here, a pyrometer is mounted on the rim of the optics and, guided by a number of mirrors, looks directly into the melt along with the laser beam. If the melt temperature exceeds a critical level, which is adjustable, the optics scale down the power output of the laser beam in real time. In this way, operators can process every contour at the optimum welding temperature – and achieve durable and aesthetic seams.The optics can therefore process every kind of plastic at its optimum welding temperature. This makes things considerably easier for operators, who only need to think about the welding contour they desire – and let the optics do the rest. As it goes about its work, the optics also provides data for quality assurance. Since the processing temperatures are known at every point in time for all workpieces, this furnishes important documentary support materials.

A number of automotive industry suppliers are already using the optics in production – such as for the welding of plastic components in vehicle interiors. The PFO20 is also suitable for axial applications such as welding plastic sensor casings.

Metal to plastic joiningAs a final note, how about the joining of plastic and metal parts? In truth, it’s not as far-fetched as it sounds. The Fraunhofer Institute for Laser Technology, for example, has developed an entire range of laser-based technologies for processing plastic-metal assemblies.

In a two-step process, the metal surface is first structured with the laser. Afterwards, the plastic is heated with the same laser or an induction-heating device and then bonded with the metal part. Unlike adhesive bonding, the process does without additives or additional intervals for hardening or surface cleaning. When preparing the metal side, the microstructure can even be adapted to the subsequent force flows of the workpiece, meaning the metal components can be made as thin and lightweight as possible.The technology was developed within the EU’s PMJoin project, together with partners from the automotive industry. A demonstrator in the form of a car door with a GFRP reinforcing brace was displayed at last year’s JEC World exhibition in Paris. Partners in the FlexHyJoin follow-up project are currently working on a fully automated version of the process. 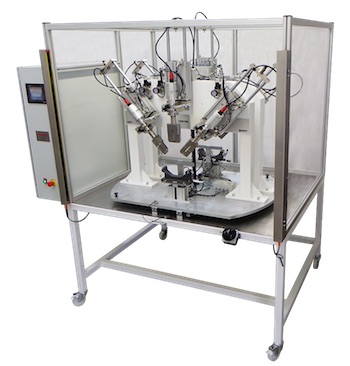 A recent collaboration project between Telsonic UK and China Tools has seen the former apply its ultrasonic welding technology to components for the latest Nissan Infiniti.

Three parts make up the moulded binnacle, which fits under the steering wheel to provide adjustability for steering-wheel height. Parts are produced in two stages, with the first step being the welding of a sub-assembly comprising fabric and a retainer moulding.This stage is performed on a floor-standing machine, which incorporates three angled, long-stroke 20kHz actuators, sequenced and switched using a Telsonic MAG 2036E generator. These operations are complemented by a handheld ultrasonic system that the operator uses to pre-weld horizontally located lugs on the part prior to the automatic welding sequence. The machine incorporates sensing to verify that these pre-welds have been completed before the automatic machine cycle can be initiated.

The retainer sub-assemblies from this first machine are then presented to a second machine that is used to marry the sub-assembly to a plastic-moulded binnacle. Three 20kHz long-stroke ultrasonic actuators are mounted to each side of a central framework. This framework is in turn mounted to a rotating table, which can be positioned as required. Once again, part-present sensors are used to verify both parts are in the machine nests, which in this case use vacuum to position the fabric correctly on the moulding lip. Profiled titanium sonotrodes are deployed to complete the welding operations, and bond the fabric securely and precisely to the substrate to meet pull-off specifications.