The Audi production complex will complete a €1 billion upgrade by the end of next year; AMS takes a look 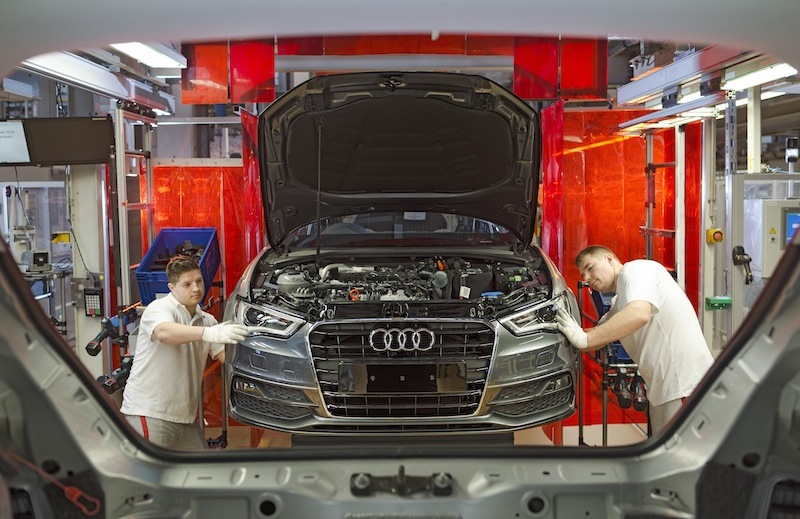 Audi’s headquarters at Ingolstadt, north of Munich, is much more than an administrative, technical and manufacturing hub these days. The usable area of the site covers 2.1m sq. m and over 35,000 people work there; it is a medium-sized town in its own right.

The reason all this is possible is because of the phenomenal rise of Audi over the past decade-and-a-half, which has led to Ingolstadt turning out close to 600,000 cars a year, making it the second-largest automobile manufacturing plant in Europe. The facility also makes TT and RS3 Sportback bodies which are sent to Hungary for final assembly.

Ingolstadt sits astride the main railway line from Munich to Berlin, which necessitates two large bridges to transport bodies to and from the paintshop to final assembly, along with components from local suppliers.

Despite its already impressive footprint, the plant is the subject of a €1 billion ($1.4 billion) investment which is due to be completed next year. This has so far produced a new bodyshop for the latest A3 range, with the exception of the Cabriolet, and a second, adjacent bodyshop is being built for the next-generation A4, A5 and Q5. Currently, the bodies for these mid-range cars are formed on the other side of the tracks, next to final assembly. [sam_ad id=17 codes='true']

Parts production: Half a million per day
Ingolstadt has its own on-site tool division, which makes dies of up to 50 tonnes for the bodyshops. It takes around 10 months to complete the tooling for a new model.

The press shop turns 1,700 tonnes of steel and 500 tonnes of aluminium into 521,000 individual body parts every day; the 7,000-tonne presses are claimed to be the most productive in the industry. Quality is as important as output; even a single human hair trapped during the forming process could cause problems later. Tooling changes at Ingolstadt’s press shop are fully automated and take 10 minutes.

The A3 bodyshop has 800 employees and 800 industrial robots in a two-storey, 50,000 sq. m building, while the single-storey site for the A4/A5/Q5 currently operates with 1,800 staff and almost 1,650 robots, covering 80,000 sq. m. Signs of the efficiency designed into the A3 building are the automatic lighting control and the photovoltaic panels in the roof, which generate renewable energy and help to reduce operating costs.

In the A3 bodyshop, one of the principal efficiency advantages to be replicated in the bodyshop under construction for the next A4-based family is that the Kuka robots are smaller and more intelligent. For example, they can be put in stand-by mode with no loss of memory.

Meanwhile, remote laser welding is employed to join steel panels, a feature transferred from the current A4/A5/Q5 body production line, in a fast and efficient process which results in narrow flanges where the single-piece outer door frames are joined to their inner sections.

The level of automation in the A4-family bodyshop is 98%, but this will drop to 86% when the new one opens. This is largely as a result of the greater proportion of aluminium to be used and the techniques needed to join it to the steel sections.

At Ingolstadt, every body goes through 30 laser measuring stations to ensure that the tolerance is no more than 0.05mm, and the welds are ultrasonically checked. Once a month a body is destroyed to test the strength of the spot welds. A4 family roofs are fixed to the sides with plasmatron braising, while for the A3 a laser braising system – which melts copper wire between the sides and the roof  – is employed.

Painting followed by manual assembly
In the bodyshops, foam is injected into the body cavities. Once heated to 180° in the paintshop, it expands to fill the space and enhance cabin refinement.

The bodies are painted through a combination of tip-and-roll immersion and spraying in a four-coat, three-bake process. Every hour, 1.7m cu. m of air is brought in through filters as large as seven football pitches, and heated to a controlled temperature.

After nine hours in the paintshop, bodies are transported across one of the bridges to the two final assembly lines, which are 86% manual in operation. Teams work in groups of eight to 12 and are allowed to rotate tasks to avoid repetition and boredom. Each cycle takes 87 seconds, and there is a blue cord system to alert line managers to any defects; two tugs of the cord and the line stops.

Firstly the doors are taken away, then protective plastic covers are fitted to the outer panels. There are moving floors so that assembly line workers do not have to walk, and anything weighing more than 10kg is lifted automatically. 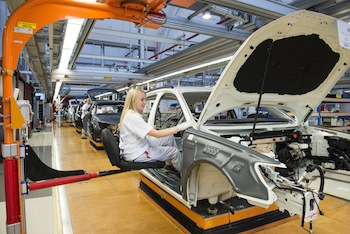 The electrical components are installed, then the trim and dashboard, before the windscreen is fitted by robots. After the carpets have been installed there is the 'marriage’ between the bodies and the chassis and powertain components, which arrive from the basement. Engines are brought in from a factory on the Austro-Hungarian border, although some sub-assembly takes place at Ingolstadt.

Finally, the seats, doors and liquids are added before cars pass to the check line and test track (high-performance RS models are also driven on the autobahn). In total, it takes Audi Ingolstadt around 30 hours to build a car.

‘Dragon’s teeth’ sections in the moving floor collect any dropped parts, while grey boxes are put into bodies at various points along the line, containing all the pieces necessary for the next phase of assembly. Audi has also developed smart screwdrivers to ease various tasks, plus ergonomic seats which swivel workers into car interiors to complete jobs such as dashboard installation. A barcode book is used to keep a record of which worker performed the tasks on each car.

Looking ahead, additional work stations have been prepared on the A3 assembly line for the plug-in hybrid e-tron model which is soon to go into production.