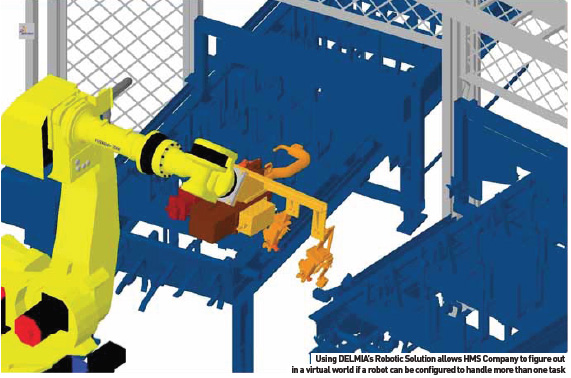 Today’s production lines need to be flexible and adaptable, and one way of ensuring that the robotics is up to the job is to do 3D simulations using an innovative program

Flexibility, affordability, and efficiency are key ingredients of today’s successful automotive assembly lines. In the past, traditional vehicle plants produced only a few car or truck models, relying on fixed tooling. One of the biggest issues in today’s production, however, is the incorporation of multiple vehicles at the same plant in much higher quantities than would ever have been considered in the past.

The HMS Company from Michigan is a design engineering firm that has been providing robotic welding systems, automation, body-in-white processing, facilities integration, system layout, and vehicle assembly line tooling to the automotive industry since 1960. According to IT Manager John Haning: “With dedicated lines, we felt relatively confident that our lines would perform as intended once they were built on the plant floor. But today’s flexible plants incorporate such a high level of automation including robots, conveyors, fixtures and other equipment that we need to verify that all this can be reprogrammed or reconfigured to build vehicles with vastly different designs – such as a four-door sedan versus a pickup truck.”

Haning says the level of complexity in today’s assembly lines could not be accomplished in a 2D environment during processing, but must be simulated in a virtual 3D world. HMS relies on DELMIA Robotics software with a physics-based, scaleable robotic simulation solution for quick and graphical modelling and off-line programming (OLP) of complex, multi-device robotic work cells for various applications.

Simulating complex tooling
The DELMIA Robotics solution provides both traditional and fixed TCP spot-welding applications with a fullyfunctional tooling interface for the design and simulation of complex tooling and fixture device clamps. Collisionfree robot trajectories can be automatically verified and numerous optimisation features can be used to reduce process cycle times.

HMS uses the solution for robot positioning, tool and peripheral equipment placement, reachability, cycle times, validation of the process and off-line programming. It typically receives a rough design of the assembly process from its customer consisting of set robot speeds, predicated welds and cycle times, among others. It then evaluates the supplied process, optimises this and finalises it after simulation. “The whole point is that we find the issues during simulation, correct them, use the available time for the robots and make the line function to its best ability,” says Mark Kuzniarski, Simulation Manager for HMS. 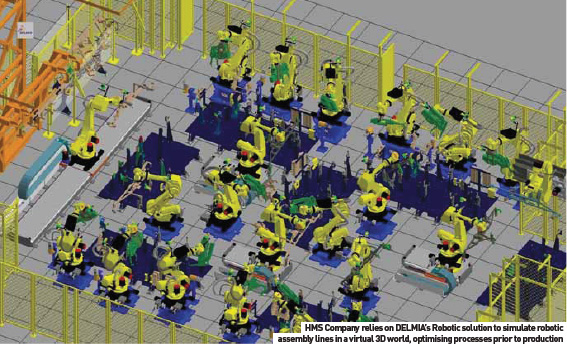 As an example, Kuzniarski gives a materials-handling robot that was sitting idle for some time. Simulation helped HMS to determine that the robot could be welding while it was waiting, so a weld gun was moved off one robot in the original design and mounted on the materialshandling robot, which could now handle multiple functions. This eliminated the cost of an entire robot. The OLP function of the DELMIA Robotics solution is also important to HMS, allowing the company to accurately program its robotic systems without tying up physical resources on the customer’s factory floor, thereby reducing labour hours and process engineering lead-time while improving accuracy.

It’s all in the retrofit
In addition to the difficulty of planning for multiple vehicles to be assembled on one line, most of HMS’s work occurs at plants that are already running production vehicles. HMS often retrofits an existing single model plant to become multi-vehicle ready. In one case, the company was able to retrofit 150 robots with 40 stations comprised of an average of 50 tools at each station across two plants within six months. The project involved a six-year-old line reconfigured to accommodate both increased production of the existing model and a brand new style, all without losing any production time.

“This is probably today’s biggest task,” says Glen Porter, General Manager of HMS. “You go into a plant that’s already running and say ‘I’m going to go in and rip that plant in two, mess with it for about six months, and then guarantee that we’ll run both old and new product with no loss in production during this conversion.’” Sounds impossible, but HMS has found that with simulation it can actually meet or beat that expectation. And, assembly lines are being planned and produced in half the time it used to take. “Today, despite a two to three times heavier workload, we’re producing faster because of simulation,” adds Haning.

Porter concludes: “Our use of the DELMIA Robotic tool gives us an edge in that we know how to leverage the simulation to its fullest, allowing us and our customer to be winners at the end of the day.”