Hannover Messe: IT’s the place to be

With an ‘integrated industry’ theme, the Hannover Messe 2015 show will promote Industry 4.0 developments 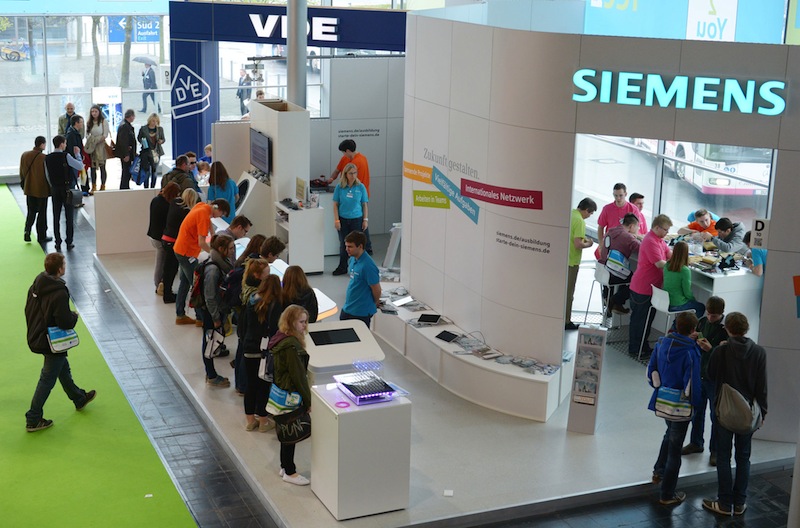 With a remit to showcase developments and innovations across the entire industrial value chain, the Hannover International Show has long been the largest trade fair for those connected with engineering. For the automotive sector, it has always had particular relevance as it encompasses the full range of technologies involved in production and development.

India has been designated the partner country for Hannover Messe in 2015, and this development may well turn out to have more significance than a simple marketing initiative. When last partnered in this way, in 2006, the country was able to make significant gains in terms of investment, joint ventures and export business.

The recently elected Indian Government has refocused its industrial strategy, opening significant new areas of industrial infrastructure to overseas investment and seeking to build upon the country’s massive information technology potential. With a trade volume of over €16 billion ($18 billion), Germany is India’s largest trade partner within the EU. The natural affinity of India and its IT expertise with the Industry 4.0 developments showcased at Hannover will be one of the key concepts. Already, commentators in India have identified the Hannover event and its partnership opportunities as an important test for the new government’s industrial strategies.

With Prime Minister Shri Narendra Modi due to attend the opening ceremony alongside German Chancellor Angela Merkel, expectations have been raised. The Indian Government’s ‘Digital India’, ‘Make in India’ and ‘Skill India’ programmes are all at a critical stage; it hopes to use the Hannover collaboration as a turning point in developing and promoting these important schemes. The ambitious plans they contain will be brought before a global audience as India seeks to move further along the road towards a high-tech industrial economy linked to world markets.

The Indian Ministry of Commerce has tasked the Engineering Export Promotion Council of India (EEPC) to develop a strong presence which reflects the country’s industrial power and the new government’s aspiration to make India a global manufacturing hub.

Hannover Messe also encourages visitors to look beyond their own industrial specialities and explore developments in related fields. By encouraging curiosity across the boundaries, successive shows can lay claim to have helped the spread of new technologies. Developments in aeronautical engineering, electronics, defence, energy generation and related fields have been brought to the attention of the wider engineering community, increasing innovation and exploration.

The spirit of the Hannover event, unlike some others, has always been to give shape and form to new developments, rather than simply to provide a neutral showcase. This year’s theme, ‘Towards a Fully Networked Industrial Future’, builds upon previous events to promote and interpret the Industry 4.0 campaign. For 2015, the organisers, Deutsch Messe, have identified a number of core areas that will form the central focus of the show: industrial automation and IT; energy and environmental technology; industrial supply; production engineering; services; and R&D.

New products & processes
At the time of writing, many exhibitors have yet to finalise the details of their display plans and several proposed product launches are still under wraps, but it is clear already that the 2015 show is likely to be impressive in terms of both exhibitor and visitor numbers. Among exhibitors who have already disclosed their intentions are many names familiar to those in the automotive sector.

Parker Hannifin will be one participant, with its Praedifa Sealing Division taking the lead in displaying a range of seal technologies. REM Surface Engineering has announced that it will feature its isotropic superfinish process (ISP) in Booth J 13 025. REM has developed a range of high-volume, high-speed, mass finishing processes specifically to meet the stringent demands of the automotive sector. They are designed to be robust, easily automated and to preserve the components’ geometrical integrity.

Also at Hannover will be IWIS Motordrive System, the power drive specialist with a strong presence in the automotive timing chain market, emphasising the increasing interest in chain-drive products across the industrial sectors.

BEKO Technologies hopes to launch new items in its compressed-air dryer range and will be keen to highlight the energy savings that can be achieved using its own range.

Hydraforce is another Hannover veteran making a return in 2015, showcasing new integrated electrohydraulic technologies. Like many exhibitors, Hydraforce will be highlighting its ability to supply and service Indian customers in light of the Hannover Show’s special partnership with India this year. Hydraforce will point to its dedicated sales office in Maharashtra and partnerships with local distributors. The company’s products are used across many industrial sectors, but engine sensors and electronic vehicle controls will be of interest to automotive representatives. Many of its displays will complement the ‘integrated industry’ theme, with the latest integrated products combining sophisticated electronic controlling hydraulic processes being shown in the VDMA Hall.

Also in the VDMA Hall will be presentations on surface technology, with a particular focus on enhancing the energy efficiency of processes within this sector. Suppliers of painting systems, irradiation technologies and plasma surface treatments all plan to present their latest energy-efficient innovations at Hannover.

A place for additive manufacturing
A three-part additive manufacturing plaza will build upon previous years’ work at Hannover to showcase these important developing technologies. It will consist of a themed showcase, a group pavilion, and stands by individual key players. The plan is to encompass everything from 3D prototype modelling to production and post-production processing. Unlike many displays on additive techniques, Hannover will not just show small-scale 3D printers, but also industry-capable machinery featured in actual industrial applications and using appropriate materials.

A special display in collaboration with Arburg will show its Free Former plastic technology. This will be linked with Industry 4.0 techniques to utilise additive manufacturing and injection moulding throughout the process chain. The aim is to show what the integration of information technology and automation can look like.

Other participants will include prominent names such as Alphacam, EOne, Kisters and Voxijet. With additive technologies now becoming very important for future production, colleagues from the automotive sector are sure to benefit from this new plaza.

Robots on show
Elsewhere, the Hannover Show will feature the very latest in robotic production technologies. Latest-generation industrial robots from leading makers such as Comau, Fanuc, Kuka, Kawasaki, Staubli, Mitsubishi, Epson, IBG and ABB will all be found in the industrial automation displays area. Fanuc – making its first appearance at Hannover since 2003 – will profile its robotic solutions and control/servo-drive systems to an audience heavily weighted towards managerial-level decision makers.

One theme that is likely to emerge is a shift in the focus of robotics away from large-scale industrial assembly settings to smaller enterprises where complex human-machine interaction opens up new possibilities. Featuring at Hannover will be new machines that are capable of taking on a much larger range of tasks than before, due to advances in sensor design.

ABB will be launching its new YuMi, dual-arm collaborative assembly assistant, which has the capability to interact safely and productively with human counterparts. Designed primarily for small component assembly, ABB believes that it will change the way we think about automated assembly.

Also in the robotics, automation and vision area, system integrators will show their ability to configure complex automated production environments, while the mobile robot and autonomous systems area will feature the latest in mobile service solutions. All these developments will involve control software that seeks to offer intuitive responses. The show will feature numerous companies dedicated to simplifying control processes while enhancing capability.

Alongside regular Hannover exhibitors like SAP and Dassault Systemes, Hannover 2015 will welcome global giant Microsoft – attracted by the ‘integrated industry’ theme and using Hannover 2015 as a route into further dialogue with manufacturing industry customers. As the organisers put it, ‘smart factories are where mechanical engineering merges with information technology’. It is in this area that Indian delegates and exhibitors are expected to play an important role, given the strength of their country’s IT capability.

Alongside the traditional displays, there will be an array of seminars and educational meetings. A global business seminar series and a women-power congress, focusing on the contribution of female professionals in industry and engineering, will take place on April 17, and a dedicated educational pavilion will feature the work of various German engineering institutes. The TU9 Universities will also have a joint stand at Hannover to showcase their various research initiatives, including the DELIVER electric light commercial vehicle project – a collaborative venture with RWTH Aachen University and support from European partners.