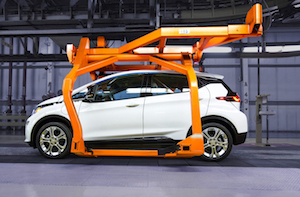 US - General Motors CEO Mary Barra has announced that the company will soon ramp up production of the Bolt EV at its Orion Assembly plant, which is located north of Detroit. She cited "increasing global demand" as the reason behind the decision.

"In December 2012, the Chevrolet Volt was GM’s flagship electrified vehicle and its owners hit a milestone [of travelling] 100 million all-electric miles just two years after it went on sale," Barra stated during her speech at the annual CERAWeek energy conference in Houston. "By December 2017, drivers of five electrified models, including the Bolt EV, racked up more than 2.6 billion EV miles."

When it comes to sales, the Bolt EV has seen a recent drop in demand across the US. According to figures from Electrek, 579 units were sold in December 2016, while 3,227 units were sold in December 2017. That figure plunged to 1,177 units in January 2018, and analysts have suggested that increasing shipments of the Tesla Model 3 are having a big impact.

Barra, however, is not deterred. "Our more than 100 years of manufacturing expertise gives us the flexibility to scale production to meet market demand," she continued. "Increased Bolt EV production benefits our customers around the world, our dealers and our employees, who are proud to build an affordable, ground-breaking vehicle that our customers love. And there is more to come because the Bolt EV is our platform providing a window into our all-electric and self-driving future."

In June 2017, 130 Chevrolet Bolt EV test vehicles equipped with GM's latest self-driving technology rolled off production lines at its Orion Assembly plant. These joined a fleet of 50 Bolt EVs that were already being tested. Barra did not reveal any plans to build more autonomous Bolt EVs, or if the planned increase to Bolt EV production would require changes or investment to the Orion Assembly plant.