Getting the right formula in machining

First-rate spindle technology is only one element of a four-part formula leading to optimised machining. As important as the machine tool might be, only the application of the right tooling, coolant strategy and cutting paths will offer up the desired outcome. Neglecting these is like trying to make bread with just flour—no water, salt or yeast. Try it and see what happens.

Beginning with cutting tools, by far the most important criteria determining selection is workpiece material. With this in mind, the rise to prominence of compacted graphite iron (CGI) for automotive applications has prompted the main tooling suppliers into action. CGI is now commonplace for everything from diesel engine blocks and turbo housings through to brake discs— essentially any applications that require either greater strength or lower weight than traditional cast iron. An assembled automotive engine can be made 9% lighter with CGI. 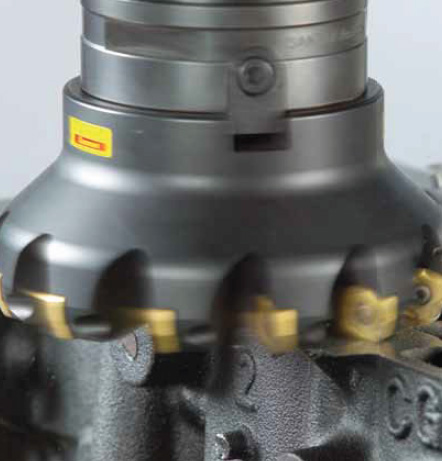 Engine block weight alone can be reduced by 22%. CGI cylinder blocks and heads have become a vital part of today’s diesel engine production. As a stronger material that can absorb more power, CGI offers the improved performance and fuel economy to meet new emissions standards. Over the past five years or so, a number of high speed machining solutions for CGI have come to market. In general, it appears that cutting tools with higher insert densities are required, in combination with higher feed rates, to achieve the desired metal removal rates. This methodology has been applied by Sandvik Coromant in developing its CoroMill 365 milling cutter for applications such as roughing and semi-finishing block and head components, ie. where large volumes of material need to be removed in a short time. Here, multi-edge, self-locating inserts with eight true cutting edges, typically from grade GC1020, provide good manufacturing economy. For CGI finishing operations, the Sandvik Auto AF 245 face-milling solution combines a high bi-metal removal rate with mirror-like surfaces that often dispense with the need for further operations. In fact, Sandvik Coromant has a solution for almost every machining task in CGI. For example, the Sandvik Auto 260.20 cutter is said to maximise efficiency when roughing cylinder bores at low cutting forces, while CoroMill 390 is a 90° shoulder cutter suitable for the high feed-milling of small/spot faces in transfer line and machining centre applications.

Having a portfolio of solutions helped DAF trucks when it made the change to CGI for the production of the MX diesel truck engine, designed to meet new Euro emissions standards. Sandvik Coromant provided a turnkey tooling solution including special tooling, standard products and applications knowledge. Simply by switching to CGI, DAF changed a 12.6L, 480hp cast iron engine into a 530hp engine.

Critical partnerships
The importance of a proven cutting tool partner is vital in critical automotive machining applications, as Mapal can confirm. The tooling specialist is supplying all of the critical tools for the latest engine line retooling project at Triumph Motorcycles. The order—worth over £75,000— covers more than 30 different styles of custom developed tool, including replaceable blade, carbide and PCD types. This success follows more than a decade of co-operation between the two companies. Today, Triumph Motorcycles produces 50,000 motorcycles annually, but this was just 2,000 in 2008. At the outset, one particular bottleneck was the machining of valve seats and Triumph engineers asked Mapal for proposals to address this problem. Mapal produced a solution that reduced the number of tools needed from five to just two, leading to a significant reduction in cycle time. 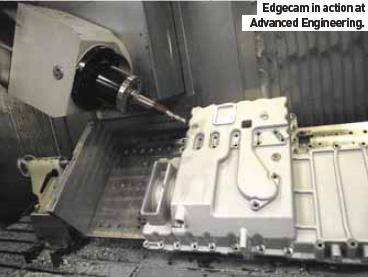 Because of this success, Triumph invited Mapal to supply around half of the tooling for its type 806 four-cylinder engine line, while for the next new engine line, Mapal delivered a turnkey project that included all tooling. This was repeated on two more production lines for Triumph plants in Thailand. Mapal has since introduced Triumph to an innovative arrangement for valve guide and seat finishing, which uses two tools for machining the valve seat and the valve guide complete. Now, Mapal is working with Triumph on an engine production line that is being completely retooled at the Hinckley, UK plant.

Fast and furious
The pace of cutting tool innovation for automotive component machining is bordering on relentless. For instance, according to recent machining comparisons, Walter says its Tiger.tec Silver inserts show a 75% increase in tool life when face-milling GGG50 brake callipers using an Xtra. tec shoulder mill. Tiger.tec Silver features a surface treatment that reduces the in-cycle machining stresses of both wet and dry applications due to its balanced combination of high toughness and hardness.

During 2011, Fuji Heavy Industries celebrated the manufacture of the three millionth EX Series Subaru car engine. WorkNC was fi rst introduced at the company in 2001 after evaluation showed that it reduced programming times for roughing toolpaths by half and cut. Most recently, the company has added WorkNC’s Auto 5 simultaneous five-axis machining module, which was needed to cope with the deep and complex cavities found in die cast moulds. The move allows the company to cut more of the part on the machining centre, reducing its reliance on EDM.

Also claiming success in this area is Delcam, whose PowerMill CAM software is helping to shorten delivery times and maintain quality at the press tool division of Chinese car-maker BYD Auto. The company has been so impressed with the results given by PowerMill that it recently added six further seats of the software at its mould-making factory in Shenzhen.

Manufacturing manager Meng Yu says: “The latest version of PowerMill supports multi-core computing. For a large mould, we have looked at the whole process and found overall savings of around 50% in calculation time. This has meant a significant reduction in programming times, which means much shorter development cycles.”

Fellow tooling supplier Iscar, says that for OD grooving applications, tier one suppliers of various automotive steel parts report that the company’s N-type chip breaker reliably breaks up chips at feed rates as low as 0.05mm/rev. The company adds that by switching from a J-type to an N-type chip former, a well-known producer of pinion gears virtually doubled both hourly output and tool life when grooving gears manufactured from 4340-like steel—completely eliminating a previous chip disposal problem in the process.

Although milling and turning dominate machining operations in the automotive sector, drilling isn’t far behind. Here, specialist processes such as deep-hole drilling are providing lucrative orders for suppliers of innovative technologies. Mollart Engineering, for example, has won a four-machine turnkey installation order from the USA, worth £1.25 million, for a deep hole drilling facility for automotive engine valves produced at a rate of four per minute. The operation is performed prior to subsequent sodium filling of the hole, which improves heat dissipation. Mollart’s solution comprises a four-spindle VDM Microdrill concept with auto-loading, vertical up-drilling method and collet chucks that counter-rotate the part against the rotation of the drill. During trials, Mollart was able to establish concentricity within 0.1mm TIR, surface finish within the customer’s 6R specification, and a CPK value of 1.6 for the 3mm diameter hole that is required to be produced 70mm deep in each valve stem.

As part of the process, Mollart is supplying the latest solid carbide-coated gun-drills, Type 113, developed by Botek, the company’s tooling partner. The new drill is claimed to run at penetration rates up to 800 times faster than conventional drills and to a depth-to-diameter ratio of 80:1. In this application, the drills are using through-tool neat oil coolant running at a penetration feed rate of 70mm/min. Staying with deep-hole applications, Sumitomo says it has set a new benchmark for high penetration (up to 800mm/ min) when deep-hole drilling in steel. This is achieved through the development of new HT cutting geometry for its latest drill range that reduces the thrust required, creates smaller chips and improves chip flow.

The Super Multi-drill XHT has already undergone successful customer trials drilling forged steel crankshafts. Four oil feed holes, 5.7mm diameter by 83mm deep, were produced in each component running at 100m/min with a feed rate of 873mm/min to achieve a tool life of 200 parts. Further successful trials have replaced a 5.8mm by 130mm deep gun-drill application on cast iron connecting rods following recorded tool life being more than doubled from 120 parts to 300. This was despite penetration rates being increased by a factor of six from 164 to 998mm/min. Driving a cutting tool with optimised tool path calculations can pay real dividends. Able to corroborate this fact is Birmingham, UK-based Advanced Engineering, which says it has won multi-axis automotive machining business as a result of using Edgecam. Typically, parts produced by the company are prototype products machined from solid, with Jaguar Land Rover being a major customer. Components include engine blocks, wheels, interior and exterior trim, vents, grills, seat belt bezels, and housings for electric window switches, all of which go through Edgecam programs.

High and dry at Ford

One of the assisting strategies is to cut the amount of water necessary to complete machining tasks. For example, several of Ford’s engine plants around the world are now using Minimum Quantity Lubrication (MQL) machining, also known as dry machining. This technology lubricates the cutting tool with a very small amount of oil sprayed directly on the tip in a finely atomised mist, instead of with a large quantity of coolant/water mixture. The process saves hundreds of thousands of gallons of water and oil per year. By eliminating the coolant/ water mixture, dry machining cuts the need to treat and dispose of an oily waste stream.

The path to redemption
Machine tools deployed include Mazak and Haas five- and four-axis machining centres, and according to prototype manager Adrian Penny, programming is “ten times easier” than it used to be just five years ago thanks to Edgecam. “The feature finder facility is particularly useful in locating holes, pockets and slots,” he says. “Before Edgecam you had to measure the hole that’s on the model, create your tool, then drill or tap or whatever was needed. But Edgecam not only finds the hole, it will also tell you if it’s threaded or counterbored, and what size tools are required. What would take eight weeks without Edgecam, can now be done in two days.”

For companies within the high volume automotive supply chain, machining integrity is vital. Lean manufacturing principles focus on a continuous supply of parts and any failure can have disastrous consequences on the assembly operation, with the possibility of stopping the track. Such integrity can be addressed by using CNC machine tool simulation software, such as Vericut from CGTech. Providing protection for both component and machine, Vericut takes the post-processed NC cutting tool path produced by all major CAM systems and checks the data for any issues that may negatively impact the process. This may be a collision between the raw material or fixture, and the structure of the machine tool. Also, any changes to the machining process can be checked before being applied to machines on the shop floor. If mistakes are made they only occur in a virtual environment.
It’s clear that with so much riding on every single cut, the vital role played by machining technologies such as cutting tools and CAM software should never be overlooked.