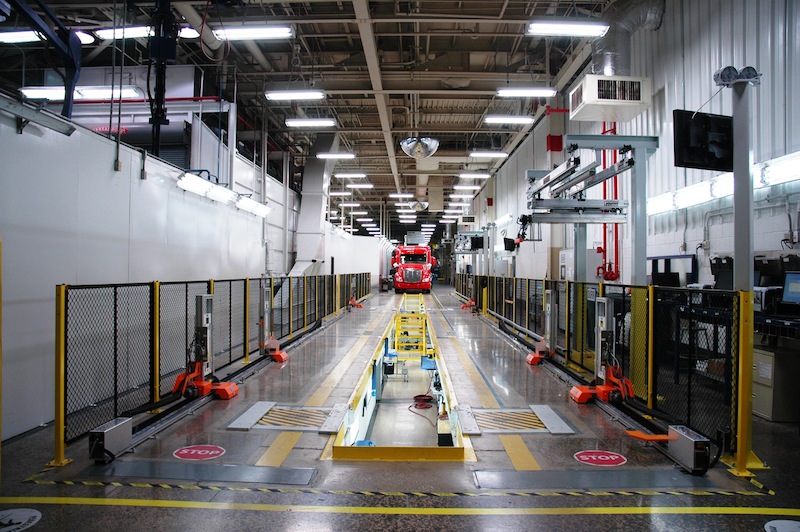 Trucks are the lifeblood of commerce; for example, the latest figures from the United States show that 19 billion tonnes of freight were carried in a single year – equating to 4.4trillion ton-miles.

The Volvo truck group with its brands of Volvo, Mack and Renault was the number two truck manufacturer in the world last year, just behind the Daimler Group that boasts such makes as Freightliner, Sterling, Unimog, Western Star, Fusos and BharatBenz as well as its own marque.

It was a project seven years in the making, but last summer Renault Trucks unveiled a new vehicle range. The launch of any new range of vehicles demands considerable investment and this was no different: €150m spent across the company's production facilities in France: Lyon, Blainville-sur-Orne and Bourg-en-Bresse.

At Lyon, a series of new, larger presses were installed to manufacture parts for the new cabs. At Blainville-sur-Orne, a new body-in-white (BIW) line and a cab trim line have been set up. At Bourg-en-Bresse, the development line for the new vehicles has been operational for the past three years. It has been used for testing the production assembly and logistics processes, finalising vehicles before they are brought to market and training operators.

Not everything needs to be state-of-the-art and gleaming new to be productive or sustainable. A prime example of this is the Mercedes-Benz truck plant at Wörth in the German Rhineland region.

Late last year, Mercedes-Benz commemorated a half-century of truck production at the factory – and no wonder. It is difficult to underestimate the impact Wörth has had on trucking in the country; one out of every two trucks registered in Germany is a Mercedes-Benz vehicle built at this factory. Moreover, the vehicles manufactured at this plant – the biggest in the world – are delivered to approximately 150 countries around the globe. The plant employs roughly 12,000 people, assembling around 100,000 units each year.

The facility was originally planned as an engine manufacturing facility, although it never actually produced any powertrains. Instead, the first truck cab rolled off the assembly line in 1963 and now, more than 3.6 million trucks later, the factory is still going strong. Operations at the plant are also considerably flexible, producing a colourful array of Atego, Antos, Actros and Arocs trucks. During a transition period, the previous models are being produced in parallel, and spare parts for these products will continue to be manufactured for years to come.

The transition to the new range of trucks has allowed Mercedes-Benz to make numerous investments in the facility, many of which have sustainability at their core. The plant now incorporates the commercial vehicle (CV) industry’s first-ever automated small-components warehouse, which serves as the basis of a new logistics concept.

Meanwhile, frame production is just one of several examples of new manufacturing techniques. Attachments can now be mounted in a variety of different locations. Making use of CAD documentation, a laser displays assembly information directly onto the frame’s side members. Workers thus know where components need to be positioned, which fixings have to be used and which tightening torque should be applied.

New robots for BIW at Blainville
For the BIW line, the key factors in choosing the robotic solution were reliability, efficiency and safety. Renault turned to ABB for 14 brand new irb 6600 robots, 13 track-motions and 18 irc5 robot controllers. [sam_ad id=17 codes='true'] “We’ve never used ABB robots before, but there are several reasons why we made the switch,” says Alain Condon, BIW manu­facturing manager at Renault Trucks Blainville. “One of the main drivers was the fact that the system can be developed and recon­figured for future use. Being able to reconfigure the system in the future for other purposes is also absolutely key to deals of this magnitude.”

The new line has five production cells. Three will be preparation cells using ABB’s Module Flex technology; the first making the underbody, the second making the rear wall and header and the third making the sides of the cab. The cabs will then move to the two remaining ABB FlexFramer cells, the first where the underbody will be com­pleted and the second where the whole cab will be finished.

The line produces 1,750 cabs a week, mainly for Renault, but also for Volvo, DAF and other truck manufacturers; the Blainville team has been working weekends to keep production at this level. The introduction of the new line will put a stop to this while raising production to 1,950 cabs per week.

The big challenge is the increased workload. “The new line will only produce a lim­ited range of medium-duty truck cabs, so we’ll only be using 14 robots compared to 72 on the existing line. But each robot will be doing four times the work, with a cycle time of 12 minutes compared to three, and as the cycle time increases, the reliability risk increases,” explains Condon. Renault Trucks’ existing robots perform one or two tasks, but the new ones will handle three or four.

Safety was also a key consideration for the project. “The body-in-white production line uses six operators for loading per shift. We analysed what they do and we defined some 93 different potential working situations, and working with an expert, we designed the new line to improve the ergonomics of these 93 situations.”
Dürr adds colour to Scania in Sweden and Brazil

The primer line for the plant in Sweden will use powder coating, with a recovery system through which the powder not adhering to the cab is collected, treated and made available for re-use. The powder coating application is carried out with 14 painting robots: EcoRP L033, EcoRP L133 and EcoRP E033.

In Brazil, the German company is going to install a conventional wet paint topcoat line with two EcoRP E133 painting robots. This line is designed for a capacity of nine truck cabs per hour, while the line in Sweden will paint 20 units per hour. In both plants, the powder and paint supply are included in the contract scope.

Pressing on with progress at Lyon 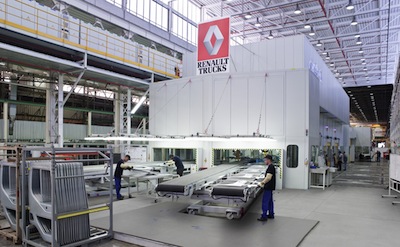 As part of the upgrade to the Lyon facility, Renault Trucks installed a high-performance hydraulic press line supplied by Schuler. The line enables a high level of productivity while at the same time offering great flexibility.

“Renault Trucks can use both the existing dies of an older press line and specially developed dies for the production of the new truck cabins,” says Martin Habert, managing director of Schuler and head of the technology field hydraulic presses. “The new line also enables the customer to exchange die sets extremely quickly.” With the aid of an automatic changing system, machine operators can exchange the complete press die set and robot tooling in less than five minutes. With more than 80 different die sets being used on the line, a quick changeover is essential. “This makes producing even the smallest batch sizes both simple and economic,” adds Habert.

Schuler not only supplied the hydraulic lead press with 2,000 metric tons of press force and the three hydraulic follow-up presses with 1,000 metric tons of force each, but also the blankloader and other automation equipment, such as crossbar robots, unloading crossbar robots and two exit conveyors. The entire line can achieve speeds of up to 11 strokes per minute with bed-slide surfaces of 4.1 x 2.5m. With two parts per stroke, the line can produce 22 parts per minute. “In terms of precision and reliability, the process is like a Swiss watch,” Habert continues. “Everything runs like clockwork.” 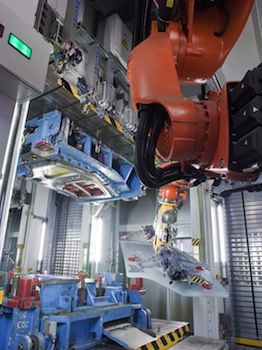 The blankloader at Renault Trucks Lyon
First of all, the blankloader separates the individual blanks from each other with the aid of fanning magnets so that the robot only picks up one blank from the pile to place on the conveyor belt.

In the optical centring station, individual blanks are captured on camera and their coordinates sent to the loading robot. The latter then places the blanks centrally and in the correct position into the die of the lead press, ready for deep drawing. The parts are given their final shape in the follow-up presses. Crossbar robots transport the parts from station to station before they are laid on one of the exit conveyors.

The whole line was tailored to the exact dimensions of the Renault Trucks production hall. The use of crossbar robots means shorter distances between the presses as the parts are moved in a linear direction and transported from station to station without the usual 180° turn. This reduces the overall footprint of the line.
Peterbilt gets in line with lasers

US truck manufacturer Peterbilt has implemented a new, laser-based non-contact axle alignment system at its Denton manufacturing facility – the first one of its kind for heavy-duty vehicles in North America. The system is designed to improve vehicle quality, customer satisfaction and production flow.

The new system includes two drive-through lanes which streamline the delivery process by improving process efficiencies and completing alignment with outstanding repeatability and minimum variation. It utilises laser technology to measure and set all axles as the vehicle moves through the alignment process, improving production flow.

“We benchmarked and tested alignment systems throughout the world before choosing this laser-based system that allows for the full range of Peterbilt’s custom-built vehicles,” adds Handt. “It is without question the most technologically advanced system available that improves vehicle quality, operational efficiencies and ultimately customer satisfaction.”

Joined up thinking in production 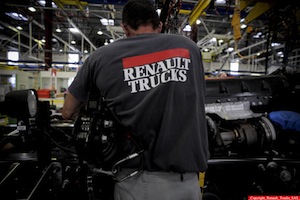 "Renewing the range has been made possible by a genuine joint development effort by the product and process engineers,” says Olivier Vidal, SVP responsible for cab and vehicle assembly in Europe, the Middle East and Africa. "In our plants, several hundred people were totally dedicated to working on the launch of the new range full-time. New manufacturing processes have been introduced for these people to improve efficiency and safety.

Vidal is keen to emphasise the connection between the working environment and product quality. "Workstation ergonomics has been one of our core concerns in the run-up to starting production of the new range. Ensuring our operators can work under the best possible conditions is also a guarantee of quality for our customers.”

Along with worker safety, quality has been high on the agenda for Renault Trucks, which is aiming to achieve perfection from the very first vehicle to roll off the production line: "We know that the level of quality expected is extremely high and that there can be no compromises," states Vidal.

In its latest development, one area the company has paid particular attention to is the tooling used by the body builders who convert the basic Renault Trucks chassis into vehicles ranging from cement mixers to fire engines. These tools, along with a highly modular approach to chassis design and provisions made for many different configurations, mean that body mounting time can be reduced by as much as 20%. The body builders have been empowered with a greater degree of independence and the risk of errors has also been reduced.

Overall, Vidal describes manufacturing the new range as a “revolution”. He says: “The design office was in touch with the technicians, engineers and manufacturing teams throughout. This notion of joint development has underpinned everything we have done over the past seven years."

The new plant and equipment and the new assembly processes have made it possible to incorporate production principles such as zero defect, teamwork, just-in-time (JIT) supply and ongoing improvement into the system from the design stage. Renault Trucks’ new range will directly benefit from these enhancements.