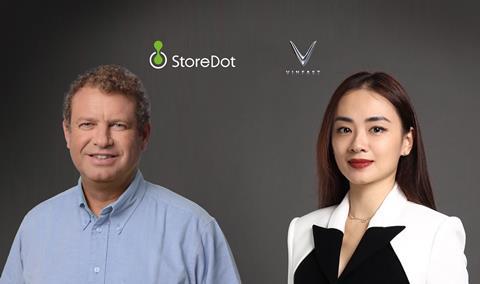 The Vietnamese electric vehicle manufacturer, VinFast, is the lead investor, and plans to scale up manufacturing and deploy StoreDot’s Extreme Fast Charging in future EV architectures.

The funds raised by this round will be used to complete StoreDot’s research and development for its silicon-dominant extreme fast charge (XFC) battery cells for electric vehicles and continue its progress on Extreme Energy Density cells based on Solid State technology for future deployment. This funding also enables the company to ramp up its California-based R&D centre and commence scale up operations in key global locations, in readiness for full mass production of cells in 2024.

Dr Doron Myersdorf, StoreDot CEO said: “This strategic round of funding, with principal investors coming from leading automotive, energy and technology companies, is a huge vote of confidence in StoreDot.

“We are now properly funded to take our silicon-dominant XFC cells to the end of the R&D phase and into scale-up in readiness for mass production in 2024 for global vehicle manufacturers.”

StoreDot says it is in advanced talks with leading global car makers for integration of its XFC technology into their future models and offers a clear technology roadmap including its next generation XED, extreme energy density solid state cells with planned mass production in 2028.