BMW’s e-mobility ambitions have not been limited to four wheels; Nick Holt visits the company’s Berlin plant to see how its sophisticated C evolution maxi scooter is built 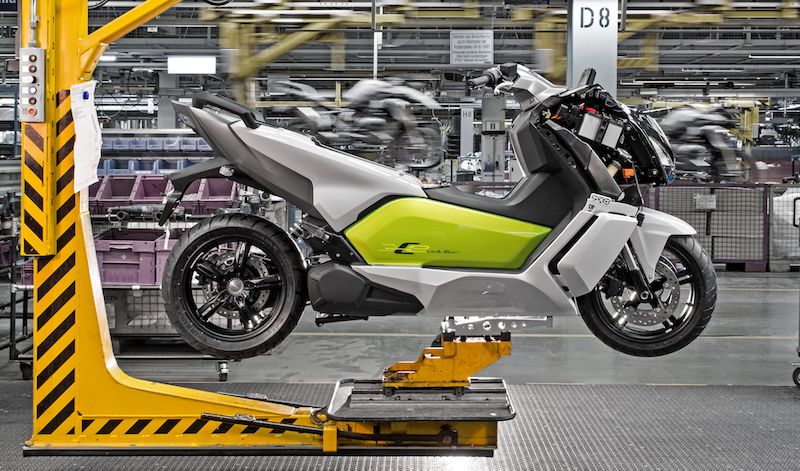 BMW’s C evolution electric scooter has been in production since 2014, but the project began back in 2011 from pretty much a zero start point, according to Markus Kirchschlager, the man in charge of production planning for the sophisticated e-scooter.

“There was a lot of development for the e-mobility technologies at that time, but almost nothing with regard to setting up an electric vehicle (EV) production line,” he states. “You couldn’t just contact a supplier and say ‘build me an EV production line’, so we had to research what we needed and began to network with specialist suppliers, universities and, of course, with colleagues in the BMW Group.”

“At that time is was difficult to get any momentum behind the project,” he adds, “as there were many concerns about the potential for this market and the costs involved in producing an electric scooter. We talked to our colleagues on the car side, who were then starting on the i-project, and they too were starting with the basics. We were able to scale some of the technology for our use, such as the batteries, and also leverage supply combining with the car volumes.”

It took two years of planning and negotiation to get the project started. “An important turning point was the 2012 Olympics in London,” recalls Kirchschlager. “We provided five C evolution production prototypes for the event, which proved a success. Then I persuaded our senior managers here to ride the prototypes. After that they were convinced (and smiling) and gave the project the go ahead.

“We then had to think about how we communicated this idea to the workforce (and to the 15,000 visitors to the plant each year). Part of this was to arrange test drives in the Mini E so they could experience the feeling of electric motor’s instant torque, and it helped to engage people with the project and its outcomes.”

The Berlin plant had a well-established motorcycle production operation and was already producing the gasoline powered C 650 scooter, but the EV build would require something different. To start with, the production volumes for the C evolution would initially be much lower than for the conventional scooter, and the assembly process for the central module, incorporating the battery, charging and control systems would be very labour intensive. As a result, the project team opted for a cell approach rather than a costlier moving line configuration.

The central unit of the scooter is constructed from a die-cast aluminium casing, with the lower part containing 12 battery cells located in three modules (supplied by Samsung) that are connected in series. These are also used in the i3 car and are the common battery platform for the BMW Group; this means that any developments are consistent across all e-mobility applications.

BMW’s Dingolfing plant, which is the company’s Centre of Excellence for the production of electric drive systems, assembles the battery modules along with all the necessary sensors and connections. This central aluminium structure also effectively acts as the scooter’s chassis, with the steering and suspension directly attached.

The production cells are very compact and closely integrated, and this is in-part due to the relocation of the C evolution production within the Berlin plant to allow for the expansion of an engine (ICE) test area. The electric scooter is now produced in a smaller area adjacent to the gasoline-powered C 650 line. As a result of the move, the production cells were redesigned with improved ergonomics and all parts being supplied in kits to the assembly team.

“We started out with a much larger assembly layout and the pre-assemblies were located in a separate area, so we were very spread out. Now we have consolidated our operations and we’re much more efficient,” explains Christoph Mühlberg, head of assembly for two- and four-cyclinder motorcycles and e-scooters. “It’s the smallest production operation in the plant, producing around ten units per day. We have a pretty long cycle time for this line as the work content for the employees on this model is high. So, we need our best workers for this. The higher the work content the more complex the build and more chance for problems. We operate a single shift with a cycle time of 43 minutes and a lead time of four hours,” he added.

Building motorcycles or scooters is generally a manual operation and the C evolution is no exception, in fact it is very labour intensive.

The first production stage takes place in a fully enclosed room, primarily for safety reasons as it’s here the assembly of the central, high-voltage storage unit takes place. This includes the fitting and testing of the systems, so there’s a strong focus on safety. The assembly of this module takes two workers to complete as it’s an involved process. Mühlberg explains the operation and its requirements: “The workers in this section are specially trained to assemble high-voltage systems and we use a computer based check list to ensure all operations are completed.”

The battery cells, with all the sensors to monitor temperature, voltage, etc. attached, are lifted into the aluminium casing using an assist crane. A heat conductive paste is applied to the casing on to which the cells are mounted. This helps to help dissipate the heat produced by the battery. The application of the thermal paste is one of the very few automated processes in the build.

“All the screws used on the high-voltage storage unit are treated as ‘A-class’ meaning high risk. So the fitting of these screws has to be electronically controlled for torque and angle. This is because this a critical part of the scooter,” Mühlberg notes.

These screws are tightened to a specific torque setting using precisely calibrated cordless electric tools that are linked wirelessly to a central monitoring system that confirms that all the tightening operations have been performed correctly. Even the selection of the tool driver bits is carefully monitored using a coloured light system to prevent the wrong tool being selected out of sequence. 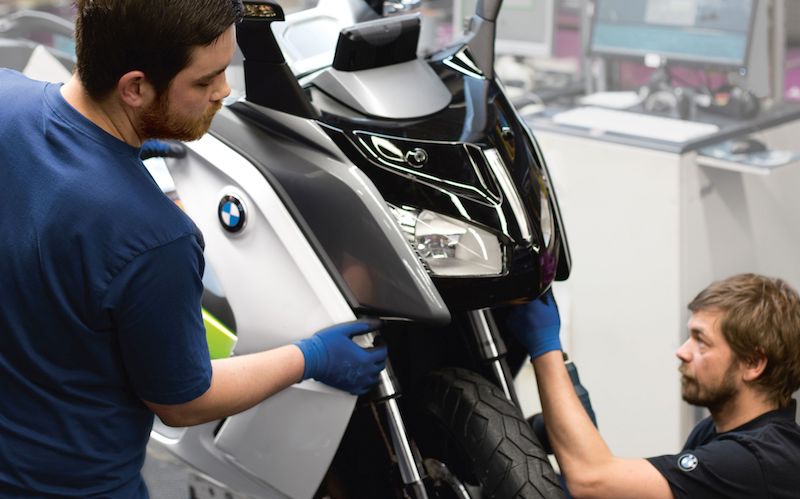 Other aspects of this unit’s assembly process highlight the special considerations when building electric vehicles. Both workers in this cell are required to wear a protective visor and thick rubber gloves to provide insulation against electric shock as one of them connects the high-voltage system to the battery pack. Should there be a problem, a similarly protected colleague is in place to assist. The casing’s final tests before transfer to the next assembly stage include a pressure check, which uses compressed air to ensure it is weather tight. Quality control is very important to avoid any failure in the battery cells or control systems, since the module is effectively sealed, making rework very difficult.

The last test in this section is a discharge/recharge of the batteries that takes around 25 minutes. The battery modules are delivered to Berlin with about a 40% charge and are recharged to this level after all test are completed. This is said to be the optimum level of charge for storage of the finished scooter. Once the high-voltage storage unit has successfully passed all tests, a coded label is printed and applied to the casing.

Outside of the enclosed high-voltage area the assembly process for the scooter has one employee for each cycle and this assembly area is a more conventional operation, although no less labour intensive. Mühlberg points out that parts are now delivered to the second assembly cell in kits, simplifying the process for the worker and saving on the space needed, whereas in the old location they came in separate packaging. The kitting operation is done onsite by the logistics team.

As mentioned, the aluminium case housing the high-voltage storage and control systems essentially forms the ‘frame’ of the scooter. In the next steps the telescopic front forks and handlebars are attached this central unit (the handlebars and controls are pre-assembled elsewhere in the plant). The steering head bearings are also fitted at this stage along with the stamping of the VIN.

The next cycle involves the drive unit and swing arm. Again there are a number of quite labour-intensive jobs being done during the assembly process, such as the pressing of bearings to support the Wittenstein liquid cooled electric motor. After final assembly, the team conduct a visual check and the scooter goes on a rolling road to check control and braking systems.

Asked about increasing the volume of output, Mühlberg thinks that it would be very difficult to shorten the cycle time in the high-voltage storage assembly as safety is very important and also the complexity of the operation makes it difficult to automate. He adds that the assembly area would be expanded to meet future increases in demand.