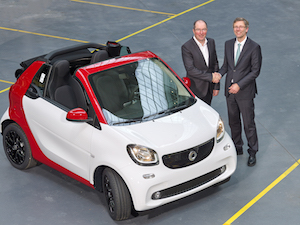 France/Germany – Serge Siebert replaces Joachim Betker as site manager of the smart plant in Hambach, with immediate effect. Betker is moving to Mercedes-Benz Bremen to become head of assembly for the Roadster SLC and SL.

Siebert helped to pioneer the smart plant, known as ‘smartville’ for its innovative and lean production concept which features a ‘plus’ sign arrangement to optimise assembly and logistics. He has held various management positions in assembly planning, process and building maintenance, as well as head of assembly. Since January 2015, he has been responsible for the logistics/supplier management division.

Betker started his career at Daimler in 1996, spending four years as head of Production Planning at smart France. After taking various other roles, he returned to Hambach in October 2011 as plant manager.