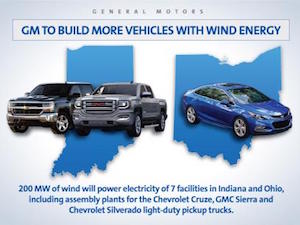 US – The OEM announced that its manufacturing facilities in the two states will by powered by 100% renewable energy, through the purchase of 200MW from wind farms. When the turbines come online at the end of 2018, renewable energy will account for 20% of GM’s global electricity consumption.

The 200MW will be supplied equally by wind farms in Ohio and Illinois. GM will be the sole user of the Northwest Ohio wind farm, owned by Starwood Energy Group; while Swift Current Energy will supply the OEM from its HillTopper project in Illinois.

The plants which will be powered by the wind energy are: Fort Wayne Assembly, Marion Metal Center and Bedford Casting in Indiana; and Lordstown Assembly, Defiance Casting Operations, Parma Metal Center and Toledo Transmission in Ohio.

GM has a multi-part energy strategy covering both onsite and offsite aspects of power requirements. “We’re helping provide solutions to green the grid through these new renewable energy deals and sharing best practices with other companies so they too can reduce risk and energy costs,” said Rob Threlkeld, GM global manager of renewable energy. “With a pragmatic strategy, companies can turn ambitious renewable energy goals into action and scale quickly.”

The vehicle-maker saves around $5m per year as a result of its green energy efforts, having started using renewable energy several decades ago. GM made its first purchase of wind energy in 2014 for its Mexican operations and has since signed deals with Texan wind farms for 30MW and 50MW. The OEM also uses solar power at 26 facilities and landfill gas at two assembly plants.