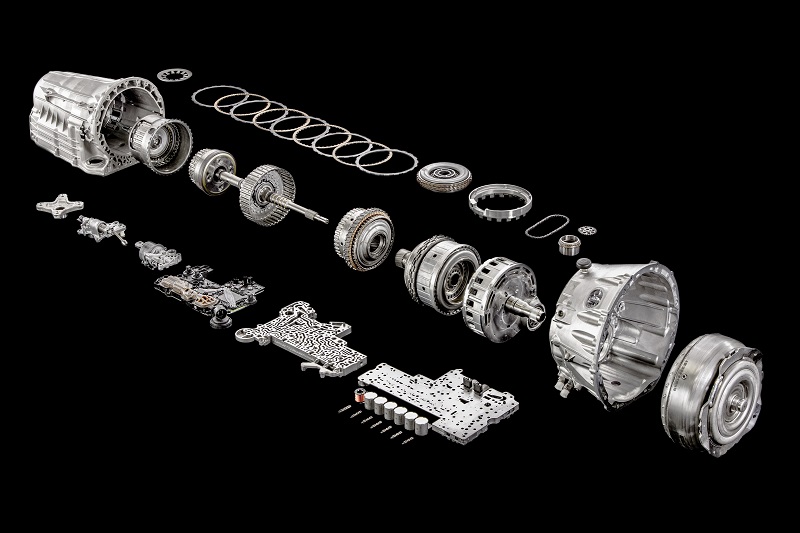 When Mercedes came to develop its innovative 9G-Tronic transmission, it required an entirely new development process. For the first time, an intensive, computer-based systems analysis and synthesis was used to define the gear set concept. From a total of 85 billion solutions for the combination of planetary gear sets and shift elements for a nine-speed automatic transmission, the OEM was thus able to select the optimum configuration. Another goal was to develop a nine-speed gearbox with a minimal number of planetary gear sets and shift elements.

Well before the first unit was bench tested, engineers had already carried out an extensive virtual test series. Using Software in the Loop (SiL) or Hardware in the loop (HiL) processes, every new software function in the transmission control system was thoroughly verified. To enable this, the entire electronics architecture – with all its control units, sensors, lines, actuators and the complete control software – was assembled and connected to a digital simulator that represented real operating conditions with a wide range of parameters. Using the results of these tests, the transmission control was then refined to its optimum operation. 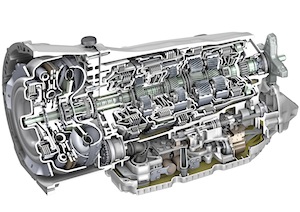 The next step required extensive and detailed practical trials. The gearbox had to prove its worth in all manner of operating conditions in real vehicles. This included test series such as on- and off-road, trailer operations, long journeys under full load, mountain routes and inner-city, stop-and-go traffic. To ensure that the gearbox also performed reliably under various climatic conditions ranging from freezing Arctic temperatures to burning tropical heat, a worldwide programme of trials was initiated that reflected the special demands on an automatic transmission and covered all climatic zones.

These driving tests were supplemented with tests in the climate tunnels at Mercedes facilities in Sindelfingen, Germany. Here, the encapsulated dynamometers are able to set and maintain temperatures ranging from -40°C to +60°C, and speeds of up to 200km/h. These standardised conditions enabled much more rapid and precise adjustments to be made.

FATS for reality
The new vehicle powertrain test bench (FATS) is one of the most modern of its kind in the automotive industry, and was first used during the development phase for the gearbox. In contrast to conventional dynamometers, the test vehicles in FATS are on wheels; but these do not spin during testing. Instead, special test wheels are used. These have a freewheeling through-drive, and allow the front- and rear-wheel hubs to be directly coupled to the test unit via shafts. Each of these four shafts in turn transfers the torque generated by the electric motors to the wheel hubs, based on the relevant test programme. The advantages of this set-up are that the entire powertrain and all dynamic control systems respond as they would under real conditions on the road.

In addition to an automatic programme in which the relevant control elements of the box are actuated by robots and defined test routines are carried out, FATS also allows a manual mode. In this case, the test engineers sit inside the vehicle during the test cycle, and operate the controls as they would in normal road traffic. This enables the precise localisation of problems that only occur irregularly or haphazardly in normal test operations, so that suitable counter-measures can be taken.

In addition to FATS, other test units were used during the development phase which assessed the long-term durability and oil circuit of the transmission under all conceivable conditions. In the block test rig, the powertrain with its engine, gearbox and propshaft is assembled and worked hard on previously recorded, digitised test routes – for example with high-speed endurance runs on an oval circuit, or on steep mountain gradients with or without a trailer. Air drag and rolling resistance are simulated by an electric motor connected to the propshaft.

Since it is only possible to partly simulate a reliable oil supply and the necessary oil levels within the transmission under all operating conditions, the engineers came up with a test rig with ‘X-ray eyes'.

They produced a transparent transmission housing for the gearbox from a high-strength plastic, installed the complete automatic transmission assembly inside it and mounted this see-through transmission on a special pivoting test rig. During the subsequent test runs, the glass transmission was subjected to different engine speeds, oil temperatures from -20°C to +120°C and various tilting angles along the longitudinal and transverse axis to simulate linear and lateral acceleration. During the process, the oil circuit was monitored with the help of HD cameras and optimised where necessary.

Investing in production facilities
The increased complexity and strict dimensional requirements of new nine- and ten-speed gearboxes are compelling manufacturers to invest heavily in transmission facilities. Chrysler’s Tipton Transmission Plant (TTP) in Indiana is now one of the most sophisticated in the world, with casting, machining and assembly/manufacturing capabilities, and is one of the global hubs for nine-speed production. When it reaches full capacity, it will ship approximately 800,000 finished transmissions to Toledo, Ohio, for use in the Jeep Cherokee; to Sterling Heights, Michigan, for the Chrysler 200; and to Fiat plants in Melfi (Italy), Tofus (Turkey), Pernambuco (Brazil) and China. Production may be expanded to other international facilities as needed.

Manufacture of the first nine-speed transmissions began in May 2013 at the company’s Indiana Transmission Plant I (ITPI). The opening of the Tipton facility also means additional work for three of the company’s facilities in Kokomo, also Indiana. Castings for the new transmission will come from Kokomo Casting; machining of the prismatic parts – housings, blocks and heads – will be done at Kokomo Transmission, and the rotating parts – gears and crank shafts – will come from ITPI. All will be shipped to Tipton for final assembly.

“With the start-up of TTP, we are enhancing the status of this region as the largest transmission installation in the world,” declared Sergio Marchionne, chairman and CEO of the Chrysler Group. “Just recently, we reached the landmark numbers of 17m four-speed transmissions and 3m six-speed transmissions built in Kokomo.”

Both the four- and six-speed transmissions are built at the Kokomo Transmission Plant (KTP). Since 1974, KTP has built more than 67m transmissions. The 17m milestone for four-speed transmissions was achieved over a 25-year period from 1988 to December 2013. The plant began building the six-speed in 2006 and reached the 3m mark in April. Since June 2009, the company has invested more than $1.6 billion and hired more than 2,600 people in north-central Indiana to produce the next generation of transmissions. In total, Chrysler Group employs more than 7,000 people at its five plants in the region.

Leading the nine-speed charge
ZF became the first manufacturer to develop a sophisticated automatic passenger car transmission with nine gears. The company decided to manufacture it in the US at its Gray Court facility, South Carolina. “In order to reduce fuel consumption, transmissions with a greater transmission-ratio spread and with more gears – with small gear steps – generally make sense,” explains Jürgen Greiner, head of development, passenger car transmissions at ZF Friedrichshafen. “While there are already seven and eight-speed transmissions with high transmission-ratio spreads on the market for longitudinally installed drivelines, this development has not yet found its way into vehicles with transverse-mounted front engines.

The US was chosen as the production location because of the company’s design-to-market strategy: “We manufacture a product on site, in its target market, whenever possible,” says Greiner. “This is why we selected a location in the US for the production of the 9HP, since this is where we see the greatest potential for this product. Only with corresponding production capacities will we be able to continue our successful course there.”

But Greiner is clear that the ZF headquarters in Friedrichshafen remain undisputedly the home market. “This is also where the Group‘s Corporate Research & Development has its headquarters, which closely collaborates with engineers in the other development centres in the US or China. However, production should be as close to the customer as possible in order to perfectly meet the local demand. It is therefore very likely that there will be additional ZF plants abroad – in cases where it makes sense for us and our customers."

When asked about the biggest challenges in developing the transmission, Greiner explains that the 9HP was ZF’s first automatic transmission with constant-mesh elements. “These positive locking components have to be shifted without any load and at the absolute synchronisation point. Thus, a lot depends on very good harmonisation of the interface between engine and transmission, which with today's control modules and software functions is entirely possible. We worked out and resolved the control technology problems step by step during the volume production development phase.” 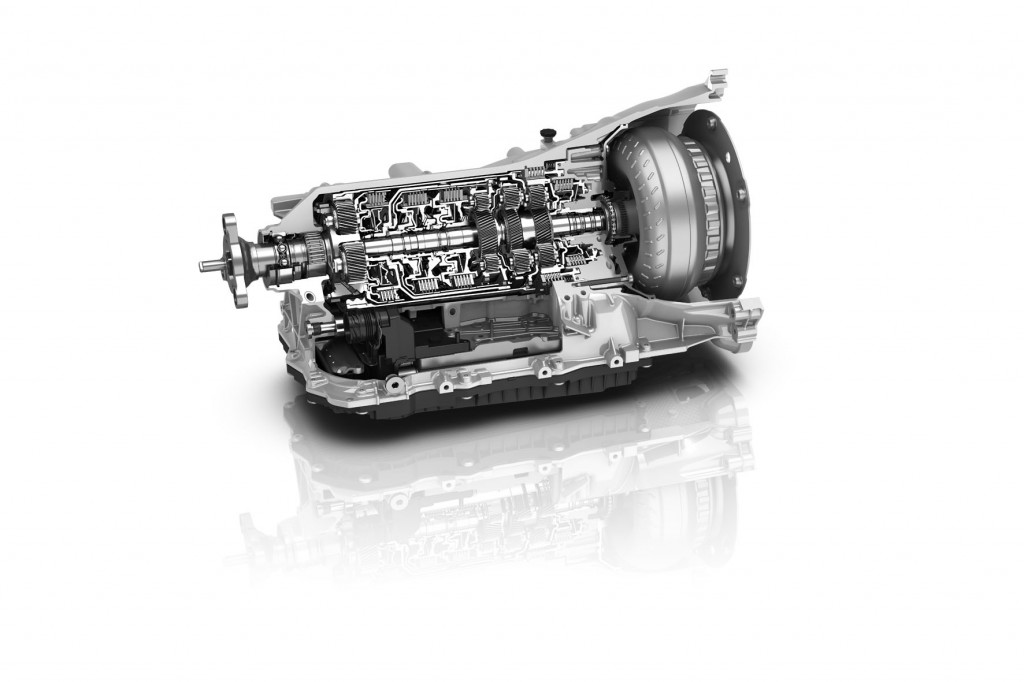 An important element in the harmonisation between engine and transmission is the communication via the electronic interfaces. “The signal quality of torque and speed, together with the accuracy of the translation of transmission requirements into the engine torque, and the engine speed before, during, and after shifting, determine the quality and speed of the gearshift,” Greiner continues. “In the special case of constant mesh actuation, synchronisation of the transmission during downshifts is helped a little by a short revving of the engine.

“We can achieve greater efficiency with dog elements than with conventional friction shift elements, which would make a transmission much bigger and heavier. With the 9HP, instead of having the required six friction shift elements, we have only four in the conventional design, plus the two low-loss dog elements. When the latter are operated in open mode, there is as good as no drag loss, and the efficiency of the transmission is significantly increased. Apart from this, re-entering the front- transverse automatic segment is only possible through the rapid attainment of technological leadership."

He concludes: “Since our main competitor is very well positioned with its six-speed automatic transmissions in terms of volumes and production efficiency, a similar concept from us would have had a hard time in the market. Therefore, it was extremely important for us to offer technical added value that is evident to the driver as well.”

For the first time with the 9HP, ZF decided to develop and produce the electronic control unit itself. Greiner says: “This not only provides additional value creation in-house, but the customer also receives a complete package of hardware and software from ZF with all the relevant functionalities for vehicle development. We develop the electronic control units in Auerbach and produce them in Mexico."