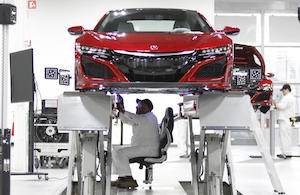 US – Series production of the next-generation supercar will begin in late April at the new Performance Manufacturing Center (PMC) in Marysville, Ohio. The twin-turbocharged V6 engines will be made at the nearby factory in Anna by a small team of specialists. NSX trial production is already underway.

The PMC will be the exclusive manufacturing facility for the NSX and was designed to handle its multi-material body and aluminium-intensive space frame. According to Acura, the centre has been optimised for low-volume production of high-performance vehicles, while innovations in the manufacturing process have led to 12 US patent applications.

- Ablation casting, developed by Alotech, will be used to create six nodes in the space frame, in what Acura says is the first application of the technology in the automotive industry. The nodes, designed to act as rigid suspension and powertrain mounting points, will be made at the Anna engine plant.

- Precision robotic welding will be used to join the multi-material space frame. In what Acura claims is an industry first, the structure will be created in a fully automated metal inert gas (MIG) process that will ensure precise, repeatable welds and a highly accurate body. Eight robots will apply the 860 MIG welds. In addition, 360-degree rotating body fixtures will optimise access for the robotic weld arms.

- A zirconium pre-treatment will be applied to the aluminium-intensive space frame via an etching process, for corrosion prevention.

- Two rotisseries in the body sealing process will improve application precision as well as worker ergonomics. The patent-pending rotisserie design enables one-sided attachment of the frame for more efficient loading and loading.

- Up to 11 coats of primer and paint will be applied alongside extensive substrate preparation and polishing to generate a high-quality paint finish.

- Hand craftsmanship will complement the automated processes. The space frame design, unlike a conventional unibody, will mean that the exterior body panels are the last parts to be installed, improving fitment and finish. In addition, critical bolts on the NSX will be manually initiated then tightened using wirelessly enabled torque wrenches, so that all torque settings can be recorded and used as a quality check. Technicians will also spend more than 14 hours assembling the powertrain, suspension, electronics, interior components and exterior body panels. The engines will be hand-built in a six-hour process.

- Quality will be assured inline by visual checks and precise measurements taken at each stage of the welding process. There is also a quality confirmation centre in the middle of the PMC, enabling technicians from various departments to monitor vehicles as they move through the production process.