A cut above the rest

Supplying machined parts to the automotive industry brings a unique set of challenges, due largely to the combination of high volumes and meticulous quality demands. The problem is exacerbated in milling operations by the prismatic nature of machining. Here, only carefully considered machines, fixtures and tooling can provide the recipe for the successful production of automotive parts.

A case in point can be seen at the Welshpool, UK, plant of aluminium diecaster CastAlum, which started adding value to its products by machining castings. The development was triggered by the award of two major, long-term automotive contracts for the supply of machined steering-gear housings and transmission cases.

The projected production volumes from the two new contracts, which this year will see CastAlum machine 700,000 castings, warranted consideration of a transfer line. However, the company says it would have been difficult to adapt if the automotive components were to change in future. A transfer line would also have meant a substantial investment before the volumes ramped up.

Progressive installation of HMCs
The sequenced purchase of twin-pallet, four-axis horizontal machining centres (HMCs) was deemed to be the answer, as they could be installed progressively to suit rising throughput and are easy to reconfigure for almost any component. CastAlum opted for Heller H2000 models in combination with tooling supplied by Mapal, which audits CastAlum’s tooling cabinets twice weekly to ensure continuous availability.

The production hall at CastAlum has ten Heller H2000 HMCs
Today, ten H2000 HMCs are installed in the main production hall at Welshpool. Each is able to machine any type of steering-gear housing or transmission case in two operations, providing flexibility of manufacture. Cranes positioned between each pair of machines allows fixtures to be changed over quickly.

Castings arrive from the foundry mounted on carriers that travel on a long, U-shaped chain conveyor running past all of the H2000s, creating a lean manufacturing environment in a tight footprint. Each carrier has a chip that identifies the type of casting and the intended destination machine, automatically diverting the castings into buffer areas on both sides of the line, which enables operator access.

A raw casting is loaded manually into a fixture on a second machine pallet, ready for the first operation once a previous, fully machined part has been unloaded and a part-machined component has been relocated into another fixture for the second operation. Both operations are performed on two different components per pallet every time it visits the spindle. So after a pallet index, a finish-machined casting comes off and is sent via the conveyor to the inspection department, and on to dispatch.

“The Heller machining centres have an average uptime of 95%, which is very high for manually loaded, twin-pallet machines,” says Keith Brown, CastAlum’s managing director. “It’s due to the efficient presentation of material to the second pallets and from there to the spindles, which minimises changeover times. The machines work around the clock, six days a week, holding tolerances down to 10µm with a process capability of 1.67Cpk.”

“The reduction we are seeing in throughput times is partly due to being able to present a component on its pallet to the spindle more quickly as it comes out of the pallet pool already in its fixture, so set-up does not delay the start of the next cycle,” explains Tony Kilfoyle, group engineering director. “Changeover is therefore limited to the automatic pallet change time, which is no more than 35 seconds. Once the part is being machined, the cycle is also quicker because idle times are short due to the 60metre/min rapids in the linear axes and 2.5 seconds tool change. Additionally, the in-cut elements of the cycle are shorter, as metal removal is fast with the 15,000rpm spindle.”

"The level of quality and degree of innovation is extremely high in this industry, so we must keep pace from a manufacturing perspective in order to remain competitive" – Thomas Kaiser, Kaiser Werkzeugbau

Large reductions in machining times are evident across many automotive parts produced in the cell at BCW for customers such as Jaguar Land Rover, Ford and Aston Martin. The subcontractor is a first-tier supplier to many of them, developing and supplying prototypes, as well as delivering production components to tight schedules. 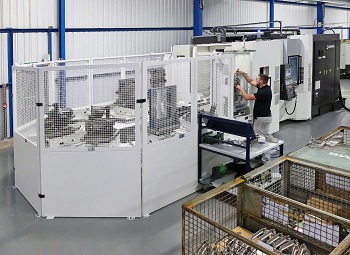 Kilfoyle points out that most of BCW’s 70 machine tools are hard-working production centres that run 24 hours a day. As a result, the company looks for robustness of build, not only of the structure but also of the spindle, tool changer, rotary axis and coolant delivery system. These items in particular can cause problems on an HMC, but BCW says that the MB5000H was rated highest of all the shortlisted machines for its functional reliability and will now standardise on Okuma for all future HMC purchases.

The machine was supplied by UK agent NCMT, with the ten-pallet cell featuring a number of options including a full NC rotary table, a 218-position tool magazine and high-pressure coolant delivery at 70 bar. Provision of two extra pallets was included in the purchase, enabling 12 different fixtures to be set up at any one time. A Renishaw OMP60 touch probe for workpiece datuming and gauging has also been fitted, as well as a TS34 table-mounted probe for tool breakage detection and automatic feedback of tool-length offsets. A swarf management system and mist extraction unit have been installed at the rear of the machine.

A modular approach
The alternative to HMCs is to take a more modular approach using multiple spindles simultaneously. Modular machining centres such as the Mikron Multistep XT-200 produce prismatic parts in a single clamping with short chip-to-chip times, typically less than one second. Furthermore, the system can be retooled in just a few minutes, with up to four machining spindles in use at the same time. The upshot is lower cost per part, by circa 35% in the case of a German manufacturer that produces 500,000 turbocharger housings in five different variants every year.

Batch sizes of the turbocharger housings vary between 500 and 10,000. As a result, machine operators have to retool at frequent intervals. With the previous machines, this used to take 80 minutes, but today, with the Multistep XT-200, 20 minutes is sufficient. In addition, there were previously 12 employees operating four machines in a 300 sq.m floor area. The machines were multi-spindle machining centres and automatic lathes, and workpieces had to be clamped twice. Now, the German company produces the turbocharger casings with just six employees and two machines in half the floorspace. All of these factors have helped to lower cost per part by 35%.

The Multistep XT-200 machines turbocharger housings on five-and-a-half sides in one set-up. Depending on the variant, between 30 and 40 machining steps, such as turning, milling and drilling, are necessary, with tolerances of ±25µm and a process capability of 1.67Cpk. According to Mikron, other successful applications of this technology include ABS systems, turbocharger impellers, nozzle holders for common-rail injection systems, hydraulic-pump housings and heatsinks.

Tools of the trade

Toolmaking is a discipline that complements the plastic injection-moulding facility of UK-based RP Technologies. Comprising six Borche presses rated at between 60 and 320 tonnes, the plant is geared up for short lead-time production of components with a shot weight of up to 1.2kg. Around 50% of output is destined for the automotive industry, either as trim or under-bonnet items on such vehicles as the Range Rover Sport, Audi R8 Etron, F-Type Jaguar and Ford Ranger.

Underpinning the manufacture of the mainly aluminium moulds, which are guaranteed for up to 100,000 parts and are often the bridging tool between prototyping and mass production, are three-axis vertical machining centres (VMCs) sourced from Hurco. In fact, RP now has 12 Hurco machines; the first five-axis model, a VMC30U, was delivered in 2012, while the most recent two machines are VMX30Mi models. 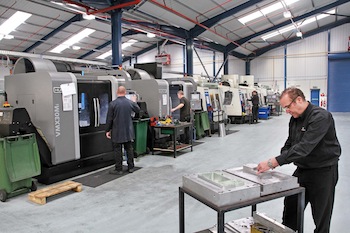 Brand loyalty
The company opted for Hurco at the outset due to the rigidity of the machines, which it believed would ensure close tolerance machining of tough tool steels and achieve a good surface finish to minimise hand polishing. Of course, remaining loyal to one make of machine and control has the added advantage that any of the company’s operators can use any machining centre and work can be swapped between them seamlessly. All are networked with CADCAM systems over 10km of cabling at the factory.

There is a six-week order book for moulds at RP Technologies, with some two dozen progressed through the toolmaking department at any one time; and this looks set to increase further still. Space exists for another 20 or so Hurco VMCs in the factory and it is likely that some of the next models will be larger five-axis machines to expand RP Technologies’ scope for five-sided machining and interpolative profiling of 3D surfaces.

A few miles east, the Birmingham toolmaking facility of Elkington Brothers is another beneficiary of Hurco milling technology. The company has added two extra Hurco machines in the past 18 months, both offering higher machining speeds and better surface finish. Managing director James Kelly is now looking at acquiring the company’s first continuous five-axis machine, after many years of operating 3+2 equipment.

Fast calculation times
The company produces many different types of tooling, including patterns, jigs and fixtures. Almost 90% of the work is for the automotive industry, including many RIM (reaction injection moulding) tools to produce sills, bumpers and spoilers.

The machines at Elkington Brothers are run in conjunction with PowerMill CAM software from Delcam, which has helped the company to adjust to an increase in work resulting from the large investments made by Jaguar Land Rover in the region. According to Kelly, the faster calculation times of PowerMill have contributed to substantial time savings: a project like milling a tool for a vehicle headliner used to take 24 weeks, but this is now down to six weeks. 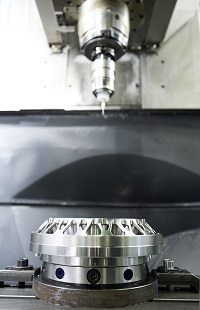 “The more sophisticated a component is, the more it matches our range of services,” says Thomas Kaiser, the company’s owner and managing director. “The level of quality and degree of innovation is extremely high in this industry, so we must keep pace from a manufacturing perspective in order to remain competitive.”

Around 70% of Kaiser Werkzeugbau products are intended for the racing track, with the remainder comprising repeat orders of automotive prototype parts. For the Porsche 919 Hybrid, the company manufactures a variety of mechanical components.

“From the brake disc chamber to components for steering, and from motors to structural parts, we can build almost all essential parts of a racing car,” says sales manager Ragnar Bregler. “Due to the high complexity, the focus is on productive manufacturing solutions like five-axis technology. The fewer set-ups required, the more efficient and, above all, precise our work can be. Porsche is putting a lot of energy into this project and is counting on reliable suppliers.”

Among the most recent acquisitions are two DMG Mori DMU eVo machining centres, while in the near future the company is looking to add an HSC 70 linear high-speed milling machine from the same supplier.