There are a number of options available when it comes to conveying work in progress in automotive facilities but they generally fall into three types: roller conveyor, belt conveyor or programmable electric suspension monorail. 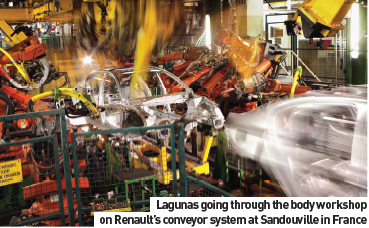 While chain-driven conveyors are still performing well for many manufacturing operations around the globe, most modern facilities are employing a more modular approach, with either an overhead monorail conveyor for engines and sub-assemblies or a floor-based pallet system for bodies.

"When it comes to conveyors, we mainly use carrier hooks, skids that circulate on roller tables and crescent systems,” says Pascal Milliot, General Manager of Renault’s body Assembly Engineering department. “When we use a carry-over process, we maximise the re-use of means of transport. However, we work with specific jigs that we have to change or make more capacity-oriented. With the current demand for flexibility, this specific jig strategy is reaching its limits as it requires substantial investment. This is the reason why other solutions are currently under study.”

Flexible systems
It is a similar situation at two US-based facilities. “We use many different forms of conveyors in bodyweld,” Sutton Davis, Manager of Body Weld/Manufacturing at Toyota Motor Manufacturing, Kentucky, explains. “From linear motor, motion control, inverter driven, rack-and-pinion to the standard chain-driven slat systems – all of these are legacy systems. As for coping with flexible demands, we have experienced few problems with the integration of these systems with newer technology and they have proven flexible in adapting to process change.”

In Tennessee, the Nissan operation echoes that sentiment. “We use a mixture of floor conveyors and overhead,” John Davenport, Department Manager of Body Assembly, Nissan US, says. “We have some of the older style chain-driven conveyors and at the same time, in some of our newer equipment, we have floor conveyors that are electric beltdriven – friction conveyors. 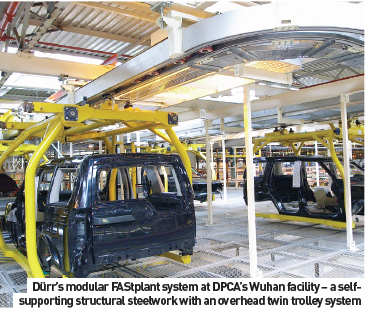 One vendor taking an innovative approach to conveying systems is Dürr. The Stuttgart-based manufacturer has received a turnkey contract from Dongfeng Peugeot Citroën Automobile Company (DPCA) to design a new assembly line at its Wuhan, China facility. The new plant, due to come online from April 2009, producing four vehicle types on two different platforms with a total of 44 units per hour, will incorporate conveyor elements at all assembly transfer points, including the paint shop.

The project centres on a chassis line drawing on the proven reliability of power- and free-conveyor technology, skillets for the trim line and a dual-strand slat conveyor for the final assembly line. A complete water test booth with a slat conveyor, power- and free conveyors for door and equipment module assembly and roller conveyors for motor sub-assembly lines are all covered in the plan, as are electric monorail systems for the loading of pallets prior to the marriage procedure.

The project includes one special aspect: the supply of four modules from the FAStplant range. This modular system is quite independent of the building in which it is installed and each module is a self-contained unit. The modules are made up of self-supporting structural steelwork as well as mechanical and electrical elements for the overhead conveyor technology – in this case a twin trolley system (TTS). Utilities, such as compressed air, lighting and energy supply, are completely integrated in the modules. It is also possible to suspend the handling equipment required for each operational cycle. A fullyflexible system, it can be extended or relocated without difficulty and will be used by DPCA for training purposes. It will allow DPCA to try out production processes on a ‘close to reality’ basis while training employees.

Legacy worries
Thousands of warehouses built in the 1970s are reaching the end of their working lives, leaving businesses to face major investments to replace inefficient conveying equipment, inadequate control systems and outdated software. But a system that at first appears to be too tired to resuscitate could still be a candidate for refurbishment. “Mechanical advances in conveyor technology in the past 40 years haven’t been so significant that older equipment can’t be upgraded, and while control systems have improved dramatically, introducing new control systems to refurbished conveying equipment can produce dramatic improvements in performance,” explains Marcus Hunter of Excel Automation.

“Software has, of course, improved beyond recognition, but like most technological advances of the last 40 years, functionality has improved and prices have reduced. So the highly-specialised, bespoke software that would have taken thousands of man-hours to write and cost many hundreds of thousands of pounds to buy, can now be bought off-theshelf for closer to £100,000.

“Safety is an additional but important consideration. Since the 1970s and ‘80s, when many high-bay warehouses were built, safety requirements have increased and the regulations restricting personnel from entering areas where automatic equipment is operating are much more stringent. The padlocked door of the ‘70s has been replaced with electrically-controlled guard doors that will stop the process if the door is opened but, under controlled circumstances, will allow power to be restored for maintenance.”

So the advice of Hunter is that before automotive OEMs and tier suppliers consider scrapping an old conveying system, they should at least talk to a materials-handling specialist about the potential for refurbishment and rebuild, a view shared by senior production engineers with many of the leading automotive manufacturers.