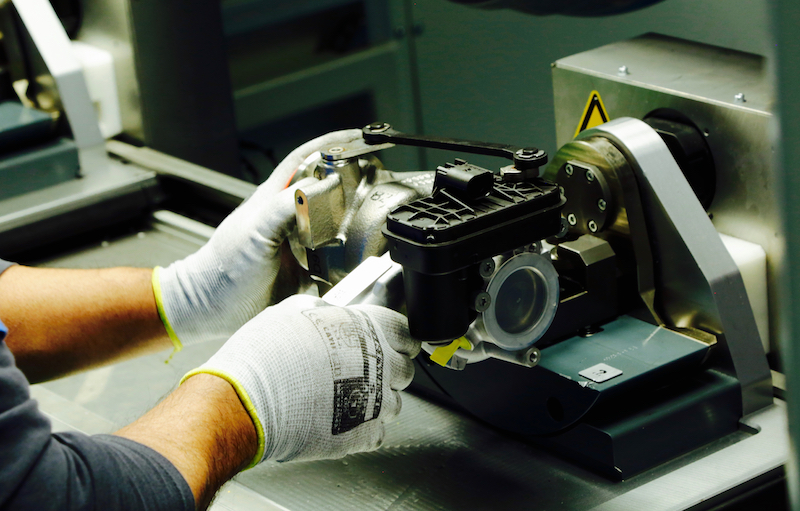 The trend of vehicle electrification is picking up pace as more car manufacturers launch new hybridised and pure electric models. Some have even promised that all their models will soon feature some level of electrification, be it mild or full. At the same time, governments around the world are enforcing measures designed to discourage the use of diesels, particularly in city centres where air quality levels are dangerously poor.

But some experts disagree with the idea that electrification is the only way forward. Bas Bonnier, general manager of turbocharger operations at Mitsubishi Turbocharger and Engine Europe (MTEE), thinks there is a long future ahead for the internal combustion engine (ICE). “Don’t be fooled by the term ‘zero-emissions’,” he tells a small group of press assembled at MTEE’s plant in Almere, Netherlands. “We have to consider pollution from driving, pollution from making the cars, and pollution from making the fuel or energy. When a power plant generates a kilowatt of electricity it emits pollution, and so if a Tesla is getting its electricity from a coal-based power plant, it won’t be cleaner than a diesel vehicle. Even when that comes from renewable sources, the huge wind turbines in the sea have to be built and regularly maintained, with helicopters flying out to them. All of this creates emissions. We can reduce emissions, but never have zero emissions.”

MTEE makes both engines and turbochargers at its plant in Almere, which is situated just 40 minutes from the capital city Amsterdam. It is the company’s main plant in Europe, employing around 850 people. The first product group – the engines – are for marine and generator applications, while the turbochargers are used in the passenger vehicle market. This unique split, Bonnier explains to AMS, is due to the evolving needs of the automotive industry.

MTEE first entered the passenger car turbocharger market on low volume models. Soon after this, the company’s management realised the vast market potential for turbochargers in small passenger vehicles. “The turbocharger business was booming in Europe for two reasons,” Bonnier recalls. “The growing demand for clean passenger cars, and the fact that Europe is the only continent that put diesel engines in those cars. Elsewhere, in Asia and the US, diesel was reserved for trucks and commercial vehicles. This was a perfect storm for us, as we had our background in working with diesel engines through MHI. Nowadays the growth is mainly in gasoline and due to MHI’s superiority in gas turbines, compressors and other turbomachinery related technologies, the MHI turbocharger storm continues.”

The first turbocharger MTEE produced for the passenger car market was in 1991 at its Almere plant. In 1997, when Bonnier started, the company made 60,000 turbochargers. In 2018, the plant will churn out somewhere between 3.5m and 3.8m turbochargers. “We now have a share of around 20% in Europe’s automotive turbocharger market,” he observes, adding that the company lists “all major carmakers” as its customers.

But the company does much more than just assemble turbochargers at the Almere facility. Bonnier describes the various processes that are carried out by him and his colleagues. “We do everything here in this plant in terms of the lifecycle,” he says. It starts with a research and development phase, which is followed by acquisition, series development, series production, and finally aftermarket. “The whole process takes a very long time,” he admits. “Smaller projects in R&D may take one or two years, but it can be up to ten years. Acquisition takes a minimum of six months, but sometimes they can be one and half years. Series development takes two to four years, and then an engine is typically in series production for five years. And we are required by law to deliver 15 years service in aftermarket.”

MTEE also has several test cells at its Almere facility. These are used to carry out a wide range of durability and performance tests in order to validate the products. One of the most interesting tests is a performance check for the turbochargers when they are subject to certain altitudes, but this is just one of many that must be carried out to ensure the product can operate as needed under a vast array of conditions. [sam_ad id=17 codes='true']

The simulation, testing and manufacturing phases are closely linked, as Mark Bos, manager of the R&D turbo division at MTEE, tells AMS: “We apply advanced simulations to virtual test and optimise the design. When afterwards we do durability testing for our products, we have adhere to criteria such as emissions, weight and various dynamic indicators, in order to get them to series production. We want to carry out extensive analysis during pre-series development to be sure that, if we go into series production, we are fully trusted. If during durability cycles we see specific components aren’t passing our criteria, then we have to go back and do adjustments. Within series production where we have large quantity products and ramp up volumes are steep, we have a large supplier base for different components, and so its very important to do these tests to make sure all of them have the same quality and performance levels.”

Bonnier agreed that the tests are an extremely important part of the turbocharger production process at Almere. As well as the checking the quality of components that are sourced from numerous different suppliers, this is also due to the varying customer requirements that are detailed by each vehicle manufacturer. As a result, all the turbocharger types made at the facility are different, even if two are made for the same carmaker. 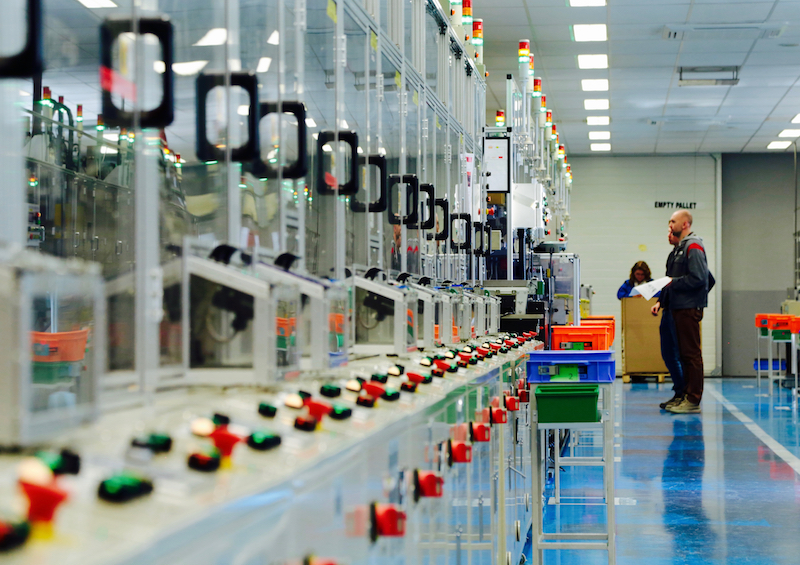 He also refers to older projects that MTEE worked on in the past, whereby Renault and Volvo both had 2-litre petrol engines capable of producing 120kW of power. “However, the customers had different demands: Renault wanted fast acceleration from a stop, while Volvo wanted fifth gear acceleration. That meant we had to match the turbochargers differently, and so again, they were not interchangeable. Now, of course, we develop variable geometry turbochargers that can achieve both fast acceleration and efficiency, but it’s just an example that different turbochargers do different things.”

To make all these different turbochargers under one roof, MTEE has numerous production lines, each of which are dedicated to specific customers. “Our line for the 1.4-litre TSI VW engine turbochargers is a good example. It’s one line, but we have two output variants. This means that the lines will have two recipes, so the robots will do different things depending on which recipe they are following.” 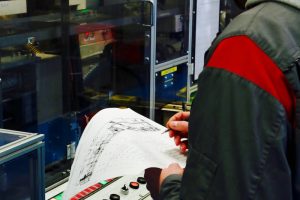 The recipes that Bonnier describes are written in code for the robots to follow. This ability to be flexible in order to meet the demands of several customers and produce different turbochargers is one that Bonnier describes as a chief competitive advantage for MTEE. He predicts that these customer requirements will get increasingly diverse and difficult to meet, but is confident that MTEE and its employees at the Almere plant have the right expertise.

Many of these small differences in performances are attributed to components and characteristics of the heart of the turbocharger – the cartridge. It features a turbine wheel, a compressor wheel and a rotable shaft. The plant at Almere produces around 800,000 cartridges per year, while the rest are shipped from Mitsubishi’s other plants in Thailand and Japan. The process of making these cartridges is very delicate and highly precise, and as such, the line making the cartridges is entirely automated.

The component dimensions and the assembly process are very accurate. If there is too much or too little oil, Bonnier muses, then the turbine and compressor wheels may not rotate properly, and as a result, the turbocharger would not perform as required.

Several small parts are carefully pieced together like a miniature puzzle on a fully automated line before the assembly process of the cartridge is finished. After this, the part is then transferred to another fully automated line running adjacent to assembly. This is used to carry out several checks and make small, but vital changes if necessary.

A key requirement from customers is balancing – the elimination of the high-pitched whine that a turbocharger produces. On this testing line, the turbine and compressor wheel is rotated in the cartridge to replicate an engine operating at various different speeds while robots measure the frequency and volume of the whine. If it does not meet customer requirements, another robot cuts a small piece of material away from one of the bolts holding the cartridge together. This process is repeated until the cartridge is balanced appropriately. It is quite time consuming, Bonnier observes, and therefore costly.

“You could use a cheaper turbocharger and put a lot of insulation between it and the cockpit,” he proposes. “However, as is often the case in small passenger cars, there isn’t enough space to do this, and the vehicle makers are trying to get rid of weight too. So the customer ideally wants the perfect balance.”

The test of time

After the cartridge is married to the other parts and the turbocharger assembly is completed, MTEE readies them for shipment to customers. A worker applies various plastic caps and plugs while a robot takes photos before they are packaged in boxes and taken away from the assembly line. This is another crucial process, Bonnier emphasises.

“The caps and plugs stop dirt and dust from getting inside the turbocharger during transportation,” he clarifies. “The reason for this is due to oil change intervals. A while back, people who bought a car would have to change the oil after the first 1,000km, but nowadays the first oil change interval is 30,000km. If dirt gets in, the turbocharger won’t be performing as well as it should for all those miles before the oil gets changed.”

Taking pictures of the turbochargers with these caps on safeguards MTEE from potentially invalid customer claims, he adds. “Sometimes during transportation between us and our customers, which is often carried out by a third party, a cap might be removed. We then get claims from our customers, and so we take pictures of everything to prove we have done what we were meant to.”

When considering the entire process of making turbochargers, Bonnier confirms that much of the time is consumed by quality testing, inspection and documentation through photographs. “We do it every time after we have added value to the product,” he says. This is the only way of ensuring that the product meets the high standards and requirements set by the customer. Looking ahead, he thinks that the extensive testing and validation of turbochargers will only become more important in the manufacturing process as CO2 targets across the world get increasingly stringent and OEM customer demands evolve.