Brownfield is the new green

In the debate about brownfield versus green, Ford comes down clearly on the side of making new from old. The company’s efforts to revitalise its former Dagenham plant have the environment in mind

It is difficult to precisely recall when big industry started paying close attention to environmental issues. Clean air legislation and health and safety laws, for example, have obliged manufacturers to improve their standards for decades, but the emphasis has always been on reactive and not proactive: cleaning up the mess rather than not making a mess in the first place. Only in the past decade has the issue of environmental responsibility come to the fore – and vehicle makers are keen to be seen as taking the lead. Ford recently started a new small diesel engine production line at its Dagenham Diesel Centre, and its desire to set a new benchmark for responsible manufacturing resulted in a nomination for an environmental award by the UK-based Business in the Community organisation.

In 2000, when the company announced it was to cease vehicle production at its Dagenham site, local consternation was palpable. Ford had been in the town since 1931 and the 2km2 site had, at times, been the largest car plant in Europe, with anywhere up to 40,000 employees. It was the classic, allen compassing production centre, making cars from foundry to final fit – and by then, exactly the sort of dinosaur that did not fit the image of modern vehicle making. Citing the greater flexibility offered by Ford’s Cologne and Valencia plants, the decision not to build the new Fiesta platform at Dagenham brought 70 years of vehicle production to an end. Few people paid attention to Ford’s announcement that the site would become its home for diesel engine production.

But diesel has been the growth market this decade and Dagenham has prospered. In recent months, production of 1.4- and 1.6-litre engines has begun, adding to Dagenham’s four-cylinder portfolio of 1.8-, 2.0-, 2.2- and 2.4-litre units. It also produces a 2.7-litre V6 for Jaguar, Land Rover and PSA Peugeot Citroën, plus a 3.6-litre V8 for Land Rover. Of all the automotive disciplines, assembling direct injection diesel engines is one of the most precise. The tolerances involved, together with the technologically advanced nature of injectors, requires conditions more akin to a laboratory clean room than a legacy factory with a creaking infrastructure. So why would Ford opt for a brownfield redevelopment rather than housing its technological flagship in a similarly advanced greenfield location? 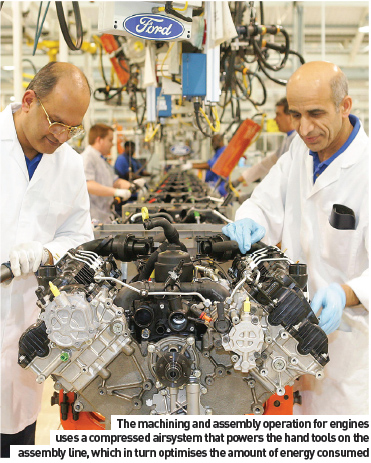 Brownfield site makes economic sense
Peter Rose, manager of the engineering and construction department at Ford of Europe, succinctly explains the policy. “Typically, as a company, we try to maximise the use of our assets. It really is as simple as that. We don’t want to go off building here, there and everywhere if we don’t need to, which is the case when we have existing facilities that can be adapted or modified to suit a particular process or product. Undoubtedly the deciding factor will be cost – and using a brownfield site is usually cheaper than going to a new location, but the actual motivation for wanting to stay on an existing site isn’t wholly based on the cost of the facility itself.

“To build any greenfield location requires massive investment in external infrastructure, which gives us a major bias towards staying at an existing location. The on-site infrastructure is also a factor. Air-compressors, substations, fire control and water pumping infrastructure, even the backroom stuff such as locker rooms and offices can all be reused. Beyond that, we factor in the proximity of existing suppliers, the availability of skilled and trained labour – it makes brownfield redevelopment very attractive to us.” Furthermore, another factor is time. “To develop a greenfield location anywhere is a lengthy process. You have to find a site, negotiate its purchase and negotiate the provision of infrastructure. Once you have that, you have to decide on configuration and layout, obtain planning permission, building control, begin construction, and then think about installing processes. Building on a brownfield is typically much quicker,” Rose explains.

His previous post was as Ford of Europe’s forward planning manager, with responsibility for bringing diesel production to Dagenham. “The Dagenham Estate is a large site and there were many potential locations for the diesel assembly facility. We were keen to reuse an existing facility if possible, and one of the sites we considered was a former CKD warehouse. The size seemed to suit our needs reasonably well. After investigation, we decided it was possible – preferable even – to reuse the structure and ground floor slab. A new roof was added and we replaced the walls, and came up with a more desirable building that suited our purposes.”

Winding up the power
While reuse is an environmentally-sound objective, the Dagenham Diesel Centre has been tasked with minimising its environmental impact. The most prominent aspect of this are the two 3.6MW wind turbines that dominate the surrounding landscape, producing over 6,000,000kWh of electricity. “As a company, Ford is always looking at ways to reduce its CO2 footprint, lower energy costs and introduce sustainable forms of energy generation,” says Rose. “Each site in the Ford of Europe network was tasked to find ways to harness alternative energy. At Dagenham, we commissioned surveys to see if the facility had a suitable profile for a turbine. It does, and consequently it is one of the initial sites on which we’ve carried out work.” Figures suggest the wind turbines help the Dagenham Diesel Centre to reduce its CO2 output by approximately 6,500 tonnes a year. It is, to date, Ford’s only wind-powered plant.

Other initiatives at Dagenham ensure the plant has bestin- class environmental credentials. The machining and assembly operation for the new 1.4- and 1.6-litre engines uses a variety of innovations to make this happen. One is the compressed air generation system that powers the hand tools on the assembly line. While not groundbreaking in its own right, by targeting an energy-intensive operation and carefully optimising the power used, Ford has reduced its energy consumption on the new line by up to 70 per cent per engine, compared with other engine lines. The vehicle maker has also implemented policies at Dagenham such as squeezing metal filings and other dry waste to drain out lubricants, then having the product recycled as briquettes. Together with the reuse of old concrete, Ford estimates it will reuse over 12,000 tonnes of what would otherwise be landfill waste. As an engine facility, the metalworking fluids and associated waste are the biggest environmental hazards. There is no magic solution, but Ford’s approach has been to use a vegetable oil rather than a mineral-oil blend for its new machinery. Vegetable oil-based lubricants are used at reduced concentrations and thus coolant consumption dropped from 350,000 litres in 2003 to 204,000 in 2006.

Doing the right thing
Legacy sites with a history of heavy industry typically have issues that need to be dealt with today. “Often it is something we would need to rigorously investigate,” says Rose. “Fortunately at Dagenham, we have a good understanding of the history. We know where processes have been carried out over the years – basically, what has been where. We did a full investigation of the site anyway, to ensure we fully understood the ground conditions, and any remedial work that was needed before the new facility was constructed. “This specific location on the estate has always been a warehouse rather than a heavy industrial zone, so no remedial environmental measures needed to be taken, though we do as a matter of course carry out Phase One and Phase Two environmental impact studies of any area we intend to develop on brownfield locations,” he adds. Ford has announced that the Dagenham Diesel Centre is expected to pass the one million engines-per-annum mark in 2009, of which the new small engine line is expected to contribute slightly over half of the total. Going into a wide range of Ford’s European models, as well as those of Volvo and Mazda, the new small engine will be marketed on a lower CO2 platform: it is surely to the manufacturer’s credit that this encompasses production as well as product.