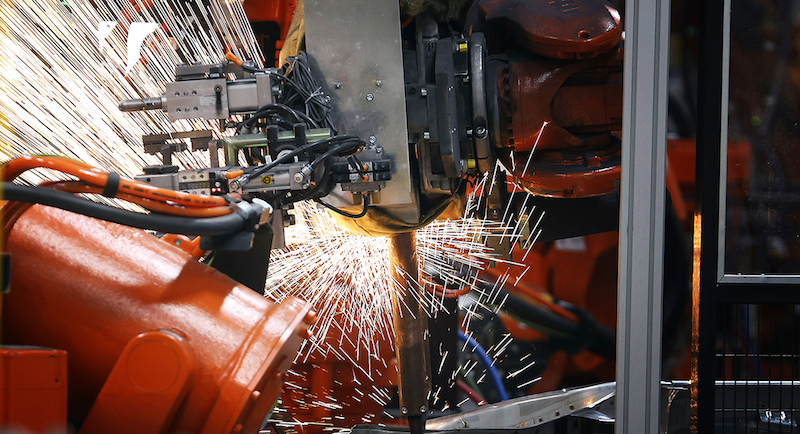 According to the International Federation of Robotics, 50% of the world’s robots are used for welding. Moreover, a recent report from BCC Research reveals that the global automated/robotic welding accessories segment should reach $2.8 billion in 2021, up from $2 billion in 2016, with a five-year CAGR of 6.9%.

To determine why these figures are so impressive, simply take a look inside a typical automotive plant. At Honda’s UK manufacturing facility in Swindon, for example, more than 300 robots help deliver around 2,200 spot welds per car body. One vehicle body is produced every 85 seconds, while 650 body-in-whites (BIW) come off the line every shift.

The process at Honda begins with the right and left wheel houses being welded to the lower dash and front bulkhead to form the complete engine compartment. This is then combined with the front and rear floor assemblies to complete the floor.

The right and left side panels are sub-assembled and transferred to the ‘General Welder’ (GW). This is the heart of the department, where the parts that have been produced within various areas (side panels, floor, roof, upper dash and rear parcel tray) come together for welding by the GW to produce a completed body.

Big orders for BIW robotsThe demands of such a process clearly require efficiency and repeatability, and as robots deliver on both counts, significant orders continue to be placed. ABB, for example, recently delivered 250 robots to Valmet Automotive for use at its Mercedes-Benz GLC SUV bodyshop in Uusikaupunki, Finland. The investment represented the largest contract for industrial robots ever signed in Finland, and doubled Valmet Automotive’s total number of ABB robots on site to more than 500.

The new production line consists of main lines and sub-assembly cells. According to ABB, the additional robots will boost the the automotive supplier’s flexible manufacturing, allowing it to enhance operations by improving productivity and shortening lead-times.

The order included IRB 6700 series robots, which ABB says are more robust, 15% more energy efficient and require more simplified maintenance than their predecessors. In addition, IRB 8700 series robots were also part of the order; these have a reach of 3.5 metres and are capable of handling payloads of up to 800kg.

Fault-free, high-speed operation is the Holy Grail when it comes to BIW production. However, these attributes have to be matched with flexibility, which is where suitably designed and configured conveyor systems can help.

Among the latest innovations in this area is Kuka’s KS PULSE (Propulsion Using Linear Synchronous Energy), a pallet-based transport system that moves various body components through the individual workstations of a BIW welding and assembly line to reduce non-productive downtime. The main element of the system is a chassis. Using various transport platforms, called skids, this carrier moves the individual body components along the line by means of linear synchronous motors.

The system boasts low susceptibility to faults thanks to a very small number of moving parts, while the skids are interchangeable in terms of cycle time, enabling multiple models to be produced on the same line.

Elsewhere, Tata Steel has unveiled a new robotic welding line at its automotive centre in Wednesfield – said to be the largest of its kind in the UK. The line trebles the site’s capacity to produce tailor-welded blanks for car door panels. Based on ABB robot technology, it can weld more than a thousand car parts every hour with the steel being shipped to carmakers across the UK, and new orders now being won in Germany, France and the Netherlands.

Welding in tandemEven where lower volumes are the norm, automation continues to prove attractive. Take the Slaný, Czech Republic facility of commercial vehicle specialist Meiller, for example. Meiller has made its name as a designer and producer of tipper bodies and trailers.

Through close cooperation with HGV manufacturers, chassis and bodies have to be optimally matched. To help with this ambition, Meiller operates a total of six automated systems featuring eight welding robots and more than 300 welding power sources supplied by Cloos. The latest systems weld side walls for tipper bodies using the Cloos ‘Tandem Weld’ process.

Kuka has been quick to take Industry 4.0 into consideration for its friction-welding machines

In Tandem Weld, two inline wires are fed simultaneously and melted into two arcs. Due to the consequent separation of the two electrical circuits, the arc can be closely controlled. High efficiency, low heat input, good weld seam quality and a high deposition rates are said to be among the principal advantages.

According to the company, the process achieves particularly high speeds when welding thin, lightweight components in commercial vehicle construction. Components of this type are in increasing demand as payload-optimised lorries can transport more freight, save fuel and place less burden on the transport network.

“At Meiller, we increasingly use lightweight components,” confims Andrej Stary, programmer and designer at Meiller‘s Slaný plant. “The side panels of our tipper bodies are manufactured from 2.5mm fine-grained steel. Furthermore, this component previously consisted of three individual elements, whereas today the side panels are formed from a single piece so that only one seam needs to be welded on each side. Due to the reduced number of welds, the component is much lighter than before, which brings huge benefits to our tippers.”

Preventing downtime with connected robotsA problem with a robot in BIW producing poor quality welds can be disastrous for final assembly, halting output while workers troubleshoot the issue. Now, however, it is possible to prevent unplanned downtime using real-time condition monitoring and diagnostics.

Cisco says it has collaborated with Fanuc and Rockwell Automation to create a solution for thousands of robots at 27 GM factories in five countries. Dubbed by Fanuc as ‘Zero Downtime’ (ZDT), the solution alerts workers before a problem occurs so they can schedule maintenance in a planned outage window. This remote monitoring, in addition to diagnostics and proactive maintenance planning, is enabled through the ‘1+1+1 > 3’ integration of capabilities and expertise that each company brings to the table, says Cisco.

“With the Fanuc ZDT solution, the robot is connected via a network and a Cisco data collector in the plant through to the Cisco cloud – all resulting in a robust and secure end-to-end solution,” says Bryan Tantzen, senior director, Cisco IoT vertical. “By transferring the equipment data to a cloud-based platform, we are building a manufacturing data highway that is allowing GM to collaborate with their large ecosystem of equipment suppliers and more easily perform preventive analytics and optimisation.”

Rick Schneider, chairman and CEO at Fanuc America, adds: “The ability to collect data from our robots and analyse it in the cloud – to predict potential equipment issues before downtime occurs – allows us to proactively address customer requirements. With ZDT, we can also take advantage of the data collected from our robots to optimise GM’s manufacturing systems by reducing energy consumption and extending equipment life, as well as improving cycle time and quality. Reducing downtime through ZDT has proven to have a direct and positive impact on GM’s plant’s performance.”

Creating friction“Friction welding sometimes comes across as outmoded,” says Walter Weh, division head, advanced welding solutions at Kuka Industries. “However, the technology is anything but – at Kuka we are guided by market requirements and move with the times.”

By way of example, Kuka has been quick to take ‘Industry 4.0’ into consideration for its friction-welding machines. Complete integration of the machine into the production network makes it possible to achieve greater productivity. Thanks to digitally-networked processes, it is becoming possible to manufacture products with a higher degree of flexibility, energy efficiency and customisation, while at the same time reducing the impact on resources.

All process data from the Kuka PCD (Process Control and Documentation) controller is numerically monitored and electronically archived. This information is then available for further analysis in a cloud-based system, for instance, which also helps to ensure traceable quality and data transparency. With this in mind, the ability to process large volumes of data safely, plays a fundamental role, as do uniform standards at the system interfaces. According to Kuka, the implementation of this principle is not limited to new products and solutions; it is also possible for robots, cells and systems that are already in operation to be networked in the same way.