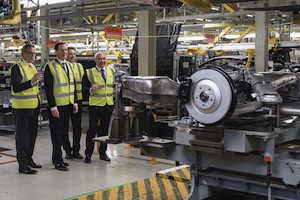 UK – The OEM is adding a 45,000 sq.m centre to its site at Crewe which will include a dedicated styling studio, R&D offices and a technical workshop. The new development is the latest step in infrastructural preparations for the ultra-premium SUVs that Bentley will launch in 2016. Construction work will begin early in 2015.

The vehicle-maker says its expansion will create 300 new jobs within engineering, manufacturing, quality, sales and marketing, and project management. The new facilities will accommodate 1,300 engineers.

Over the past 18 months, Bentley has announced the creation of 950 jobs in total, including this latest expansion. Further developments include a new apprenticeship training facility to house the largest intake of recruits in a decade, an expanded engine production facility and a paintshop investment. Bentley is also playing a key role in bringing the first University Technical College to Crewe. The company has committed to an investment of £840m over three years for product and facility development.