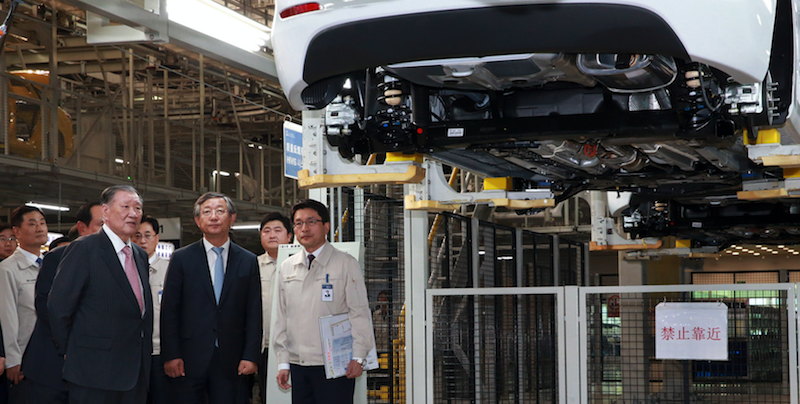 Inductively powered conveyors have been successfully implemented across automotive manufacturing facilities for many years. Among the users and supporters of this technology, the Hyundai Motor Group is probably the largest user of this technology. Inductive Power Transfer technology (IPT) has been provided, installed and supported by Conductix-Wampfler in many locations in the last two decades.

Conductix-Wampfler started marketing and implementing IPT components in industrial applications 20 years ago, back in 1997. At this time, BMW in Germany was one the very first automotive companies to embrace the advantages of the technology to modernise the engine dress, axle assembly and marriage operations at its Dingolfing plant.

IPT was chosen as energy transmission solution for these skillet lines

Then in the early 2000s, Hyundai began implementing inductive powered conveyors in its R&D and test facilities in Korea. The clear advantages of this technology in electrified monorail systems (EMS), skillet lines or automated guided vehicles (AGVs) were rapidly identified and the next step to large scale industrial implementation was taken.

Indeed, the Hyundai Motor Manufacturing Alabama (HMMA) plant in Montgomery inaugurated in 2005 was designed and implemented largely using IPT from the body shop to the final assembly operations, in a large variety of conveyors. At this time, it was one of the fastest producing car plants in the world and remains the only, almost, full inductive powered plant.

Since then, IPT systems have been implemented in the majority of the Hyundai or Kia manufacturing locations around the globe, following the international development of the manufacturing network. The core application for IPT was skillet lines, the main reason being ease of maintenance. Providing power to the lift tables requires an electrification system in a shallow pit, which is difficult to access for maintenance operations. The wear-free contactless energy transmission solution IPT is therefore perfect for this application.

Moreover, Hyundai shared the positive experience and long-term return on investment aspects of using contactless power transfer to its joint venture partner, the Beijing Automotive Group. The fourth and fifth plants under umbrella of the Beijing Hyundai Motors are both equipped with IPT for the body shop EMS conveyors and the skillet lines in the final assembly area. The fourth BHMC plant, located in the strategically-important north-eastern city Cangzhou, was inaugurated in October 2016.

By opening its new plant, Hyundai is setting out to seize the initiative in the incrementally-competitive Chinese market with a ‘New Plant, New Model and New Strategy’ initiative. Cangzhou began operations just four years after Hyundai’s third plant opened in Beijing, in 2012. The competitive edge at Cangzhou lies in its strategic location. It is situated 200km southeast of Beijing, aligned with existing suppliers and the Tianjin Port logistics base. 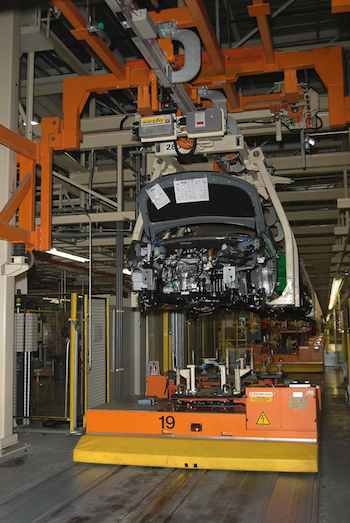 Hyundai’s plant in Montgomery, US, implemented IPT from the body shop to the final assembly

Built on a 1.92 million sq.m site, with a floor space of 250,000 sq.m, the plant is fully equipped with press, body, paint and assembly lines, in addition to an engine plant. The facility’s initial capacity of 200,000 units will manufacture strategically important small cars. It will expand to its maximum capacity of 300,000 units by 2018. When the fifth BHMC plant goes into operation in Chongqing and reaches its targeted capacity of 300,000, it will bring Hyundai’s annual output from China to 2.7 million vehicles.

Both the Cangzhou and Chongqing plants are very similar in term of manufacturing equipment and each comprises a full-scale body shop with nearly 2.800m of electrified overhead monorail conveyor with a total of approximately 250 carriers, travelling in 12 independent circuits. In addition, the skillet lines with a total length of 500m and 90 platforms are implemented in the final assembly operations.

The Hyundai Mobis subsidiary also operated on both sites an inductive powered overhead conveyor system for the supply of components to the assembly lines.

Expanding its worldwide manufacturing base was not Hyundai’s only concern in the last decade, modernising its existing plants in Korea is also a major area of investment.

The challenge there is to modernise the plant, for example by improving the ergonomics of final assembly operations by implementing skillet lines with variable height of the car body, without having the luxury of long production interruptions. Also there, IPT was chosen as energy transmission solution for these skillet lines, thanks to the ease of integration and robustness of the components.

Smaller scale systems as for example in the Global Training Center in Ulsan or the highly confidential R&D centre in Namyang also benefit from the reliability and performance of the IPT products.

The Conductix-Wampfler range of IPT products is based on a proven technology to efficiently generate the magnetic field required to transfer power contactlessly from the stationary track to the mobile part of the conveyor.

On the secondary or mobile side, different geometries of magnetic field collector units, also called pickups, are implemented: flat for AGV systems with an underground inductive loop or E-type pickups for inductive loop laid in the air.

The induced AC power is then rectified to a DC power intended to power electric motors through an industrial drive or charge an energy storage. With no mechanical wear and tear, it is therefore an ideal fit for 24/7 availability requirement of today’s automotive manufacturing industry.

Since the market introduction 20 years ago, several product redesigns and improvements took place, always in line with the technical requirements of various applications, from parcel sorters to AGVs over pallet conveyors.

Inductive Power Transfer (IPT) technology has been commercially available since 1997. It is capable of transferring power in the kW range. The basic principle is the same form of electromagnetic induction used by conventional transformers. However, in this case instead of tightly wound (and closely coupled) coils on a shared magnetic core, the primary and secondary windings are separate and may move with respect to one another. Nonetheless, an alternating current in the primary conductor induces an alternating current in the secondary with which it is (albeit loosely) coupled by magnetic field. In order to make this process practical, the operating frequency is increased to 20 kHz. This reduces the size of the components since the energy density is increased in proportion to the frequency, in the same way that aircraft use 400 Hz frequency in order to reduce the size (and weight) of their electrical equipment. In addition, IPT uses tuned resonant coils in order to improve the coupling.

Contrary to popular hearsay, loosely coupled inductive power systems are more efficient that battery-powered systems. The efficiency of the inductive coupling between primary and secondary in an IPT system is in the order of 96%. This is much better than batteries, which are typically only able to return 80% of the charging energy applied. For this reason, Automatic Guided Vehicles AGV integrated in the assembly process are the ideal fit for the implementation of IPT to guarantee high system availability.

Thanks to the contactless transmission without any galvanic contacts, IPT is a safe and reliable system with no mechanical wear and tear. With no related mechanical maintenance, it is therefore the ideal answer to the 24/7 availability requirement of today’s automotive manufacturing industry.