As Industry 4.0 kicks into even higher gear, AGV technology is helping to make it a smoother and more responsive upshift 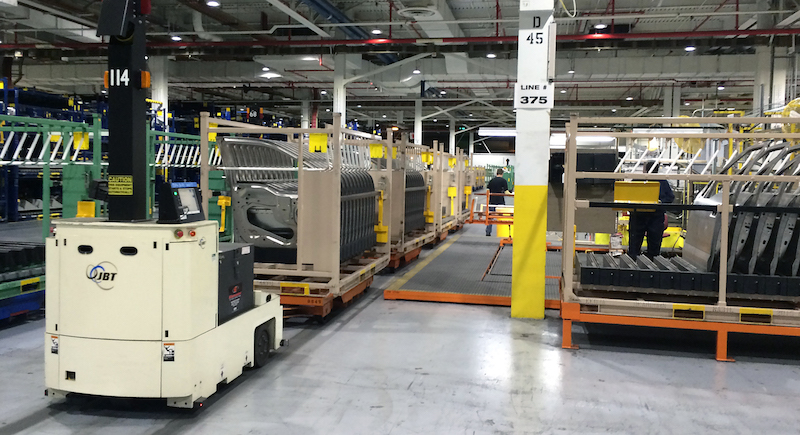 Earlier this year, we discussed how automated guided vehicles, AGVs, are becoming fixtures of the automotive industry and how enterprise approaches and deployments were beginning to gain traction. A year on, this traction has turned into full blown momentum.

Virtually every major automotive producer has launched a significant initiative to incorporate AGVs into their global operation. We’re beginning to see the concept of Industry 4.0 kick into higher gear and AGVs are helping to make that upshift smooth and responsive. The playback and reporting capabilities of software are particularly advantageous to those who are embracing Industry 4.0, as these features empower facilities that are running a lights-out operation.

Between stamping, powertrain, and assembly plants, the opportunities to utilise AGVs within the automotive industry are plentiful. Vehicles can integrate seamlessly into facilities and help to connect manufacturing, regardless of their location in the world. The use of automated technologies for operations such as assembly, welding and stamping is long established across the automotive manufacturing industry. To that end, robots and conveyors are familiar fixtures in the modern, highly automated plant. In recent years, another installation that has become an instantly recognisable sight is fleets of AGVs.

Growing advantagesThe growth in take up is due to benefits such as increased operational efficiency and on-time delivery of parts to production lines to support round-the-clock operation. Other advantages include careful transit of components and materials, continuous monitoring of its whereabouts and increased operator safety.

This all-important safety aspect of AGVs has provided a great incentive to automotive manufacturers. In the US, Occupational Safety and Health Administration statistics showed that forklift-related accidents accounted for 89 deaths and almost 35,000 serious injuries during 2015.

Increased activityJBT Corporation is an established AGV vendor with multiple installations at each of the US automotive industry’s ‘Big Three’ and is now gaining interest from major OEMs in Europe and Asia. Typical AGV applications include automated raw material delivery, automated work in process movements between manufacturing cells, and major subassembly transport. AGVs link shipping/receiving, warehousing, and production with just-in-time part deliveries that minimise line side storage requirements. The systems help create the forklift-free manufacturing environment which many plants in the automotive industry are seeking.

Right now, JBT is seeing a lot of activity among customers with whom it has a long working relationship – early adopters of AGV technology now expanding their systems – and new customers who are embracing further automation in the form of AGVs. JBT’s automotive industry specialist, Greg Pachuta, says: “There’s a greater trust that AGVs will not only solve materials handling problems but are cost-justifiable and much more reliable than they were many years ago. Also, employees are welcoming them much more so than they did before.”

Pachuta says one significant aspect of the recent growth in activity he’s seen, is what he calls the “enterprise approach”. “We aren’t just looking at single plants now. It used to be the case that we would install a system in one plant, then maybe another one close by. But customers now are looking to cover plants globally. It’s a major increase in our workload and the amount of assistance we are going to be providing.”

AGVs are coming up the agenda, it seems. For OEMs designing new facilities or upgrading lines, the AGV function is no longer an afterthought. In the past they may have looked at material handling on a plant-by-plant basis. It would take an individual plant manager to push for the AGV system. Now at a corporate level, customers are agreeing that AGVs should be part of the overall material-handling mix, knowing that they help to deliver results and increase safety.Besides the take up among carmakers, more tier one suppliers are now bringing AGV installations to their plants.

Data drivenAs autonomous technology plays a greater role in terms of the OEMs’ products, so production facilities are already developing along those same lines to give us the ‘smart’ factory. AGVs have a huge role to play in that evolutionary process. With each material movement via the AGV system, operations are time stamped – on pick-up, transit and delivery – so the system is always tracking the status.

“We have report packages that allow customers to go back and analyse the reliability and performance of the system and redeploy the AGVs in the most efficient manner,” Pachuta explains. The information is transferred between the AGV system and the production control system at the facility. With this full account, the customer is able to assess actual movements as well as view simulations when planning for a rise in volumes and expand the fleet in preparation for that.

Replay and simulationThe AGV system software includes a 3D virtual view of the system in operation, allowing customers to watch a screen that shows how AGVs are operating in the facility. If, for example, a vehicle had an unplanned stop at some ‘lights off’ point overnight, the replay function spools back to any given timeframe. So, if someone walked in the way of the AGV or a box was left in the vehicle’s path, these explanations are quickly acknowledged and acted upon. 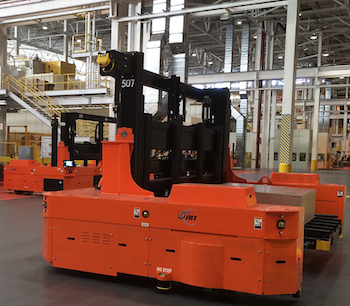 Besides the take up among carmakers, more tier one suppliers are now bringing AGV installations to their plants

Standard or customFor the most part, Pachuta says, AGVs are an off-the-shelf item, but every OEM asks for custom features here and there: “It could be something simple as a safety feature or a charging approach but generally speaking they are purchasing something very close to our standard product. We build to order but we are getting close to stocking our standard products so we can deliver in a much shorter time frame.” Many of the systems are taken on lease for about seven years, and then typically on renewed lease for another seven years. “We see the lifecycle of an AGV to be 14 years at least, some cases 20 years,” Pachuta adds.

Power performanceEnergy consumption is another of the outstanding benefits of AGVs. As the system controls acceleration and uses regenerative deceleration, the AGVs don’t use mechanical braking at all. This makes it more energy-efficient than even the most skilled human forklift operator. Autonomous drive is also an advantage from a maintenance perspective as components and electronics last longer because of the controlled movements.

The battery receives kinder treatment too as recharge levels and cycles are so much better controlled and tracked. It is simple to demonstrate that the batteries have been used and maintained and equalised properly in accordance with the manufacturer’s expectations: “Nowadays there are quite a few battery options, including hydrogen fuel cells, we’ve used them for at least 10 years,” Pachuta explains.

Tipping pointWith any technology that emerges, there’s a certain point where the stand-out benefits of a technology remove those lingering hesitations based on cost. AGVs have now reached that point. Their capabilities continue to grow and with new sensor technology they will only become smarter and more dynamic, taking on applications and providing returns that were not previously achievable.

As the sharp growth in installations across the automotive industry shows, AGVs are now a proven solution.