An order for progress

After the dips in demand of recent years, car makers in Brazil and Argentina anticipate an upturn in market fortunes and a boost in vehicle production 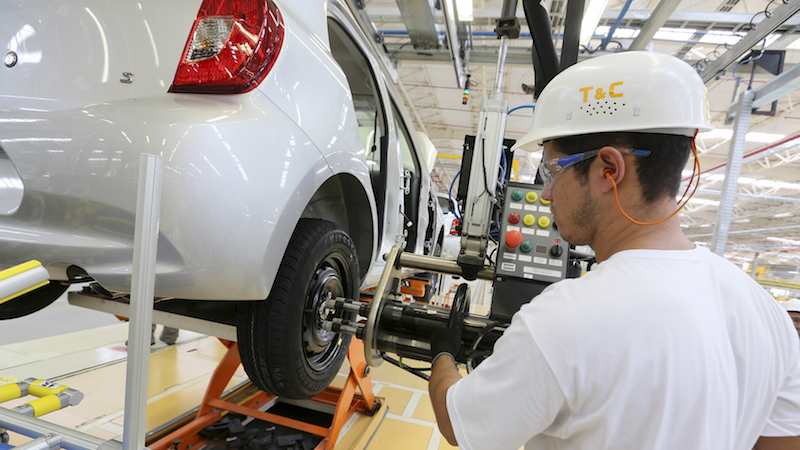 Embattled vehicle makers operating in Brazil are predicting a return to growth in 2017 after the market sunk last year to nearly half its 2012 record of 3.8m. Sales in Brazil “hit bottom” last year, the commercial head of FCA Fiat Chrysler, the country’s biggest automaker, told local journalists in December 2016: “It’s not going to keep falling.”

The country’s vehicle manufacturing association, Anfavea, is bullishly predicting a boost in vehicle production of 12% to 2.4m units in 2017 on the back of the country’s relatively small but increasing export sales. Meanwhile General Motors, South America’s largest maker, believes sales will rise to 2.4m, up from 2.05m in 2016, Carlos Zarlenga, the head of GM in Brazil told Reuters in November. Toyota meanwhile is predicting a 5% growth increase. 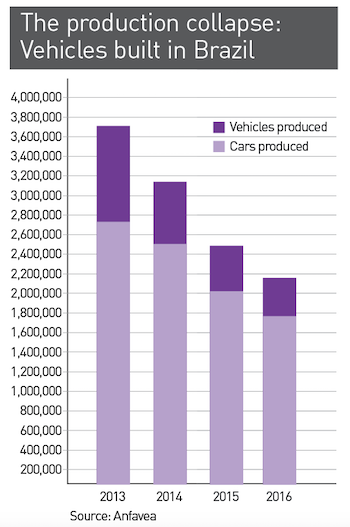 The optimism will be welcome news to car makers that have struggled to ride out a collapse in demand matched only by Russia’s for its length and severity.

Brazil had been a global hotspot for automakers after sales climbed the giddy heights of 3.8m in 2012, up from 1.5m in 2005. Back in 2013 we reported that the country was attracting more inward investment from automakers than Mexico as makers scrambled to catch the rising market and avoid import duties under Brazil’s Inovar Auto localisation scheme.

Then came the collapse. Simmering corruption scandals that erupted during President Dilma Rousseff’s second term from 2014 helped trigger a recession that decimated both consumer confidence and spending power. That directly impacted the car industry both at home and for Brazil’s surrounding neighbours, slashing demand and forcing manufacturers to lay off workers in a desperate attempt to stem the tide of losses.

The car makers’ struggle is revealed in figures put out by General Motors back in September last year. The US firm has been incredibly successful in the region. It claims to be South America’s largest car maker in terms of sales, with a regional share of 15.4%, virtually all Chevrolets. It has 24,000 employees across South America and boasts 18 manufacturing plants. In Brazil last year it came second in terms of overall sales behind long-time champ Fiat but ahead of VW, which saw sales slump after a loss of production due to supplier problems.

GM also claimed first spot in the model charts for the second year running with the Chevrolet Onix B-segment hatchback and saloon, kicking Fiat off the top after a 30-year run.

But that chart success hasn’t helped it overcome the disastrous fall in sales. GM made 680,737 vehicles in Brazil in 2013. In 2015 that figure had nearly halved to 361,779. The firm’s Gravatai plant in the south, one of three vehicle assembly plants GM operates in Brazil, makes the successful Onix but GM cancelled a third shift added in 2013 with the loss of 1,466 workers, according to the local metalworkers union, Sinmgra. Back in 2013, GM said capacity would expand to 380,000 at the Gravatai plant alone. Last year GM sold just 345,874 cars in Brazil. 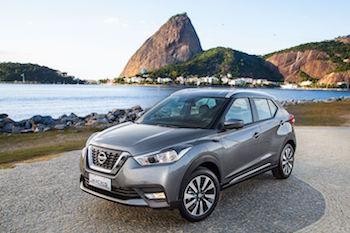 The dramatic fall in sales contributed to GM South America’s EBIT (earnings before interest and tax) adjusted profit margin falling from a wafer-thin 2.7% in 2012 to a negative 8% in 2015, the firm reported in September. In the first half of 2016 that had slightly improved to negative 6.6%.

As a consequence, GM said it was “restructuring” it’s business model in South America, without giving details. It noted that Brazil continues to be damaged by a devalued currency, high interest rates and rising unemployment. That could threaten GM’s 6.5 billion real ($2 billion) investment in the country, promised in 2015 to run to 2019.

In 2014 Nissan opened a $1.5 billion plant in Resende, Rio de Janeiro state, with a capacity of 200,000 as part of an ambitious drive to increase its presence in the country. Last year Nissan’s sales, including imports, reached just 61,000. The new Nissan Kicks small SUV, built at Resende and launched in August 2016, should boost that however – in December last year the car beat Ford’s popular EcoSport and the Renault Duster in the sales chart.

VW had its own problems outside of the sales slump. The firm’s spat with Bosnian supplier Prevent Group left the firm without the seats from Prevent-owned Keiper, forcing it to shut production at its three car manufacturing plants in Brazil for a month. It eventually restarted production in September after advertising for fresh suppliers in a newspaper. Despite the restart, Volkswagen Brazil’s CEO David Powels told Reuters in November that VW is cutting investment in Brazil from 10 billion reals initially promised over five years to 2018 to 7 billion running to 2020.

The situation is currently grim, but analyst IHS Automotive believes makers will ride it out rather than cutting their losses. “We expect some capacity adjustments (change in the shift configuration, use of downtime, etc.) but no closure for any major facility in Brazil in the short term,” Carlos Da Silva, manager of South American light vehicle production forecast, told AMS.

IHS also predicts that the market will pick up, but warns that it will be a long time before it returns to the heights of 2012 and 3.8m sales. By 2020 it predicts just 2.2-2.4m. “Yes, 2017 should represent the return to growth but it will be very sluggish and overall quite limited,” Da Silva said.

The problem remains that consumer confidence is rock bottom, inflation is outstripping wages, credit availability remains low, and household debt is high, according to Da Silva. Brazil needs political stability if it is to avoid the boom/bust cycles that plague another BRIC market, Russia, he argues.

The automakers’ association, Anfavea, argues that the good times will return to Brazilian manufacturing thanks to exports. Exports have helped occasionally unstable markets like Thailand and Mexico establish stable car industries, and Brazil hopes to be in a position to do the same. Last year country exported just over 520,000 assembled vehicles, up from a shade over 400,000 the year before, the bulk of them cars. That’s still behind the record total of 724,163 in 2005, but it’s a step in the right direction. Anfavea predicts the figure will rise 7% next year. “The issue of export is fundamental so that we may use our productive capacity,” local press quoted the Anfavea president Antonio Megale, as saying in January this year.

However, Brazil’s export markets are predominantly its neighbours, which are currently underperforming – no surprise considering their fate is tied to Brazil, by far the biggest economy in the region. 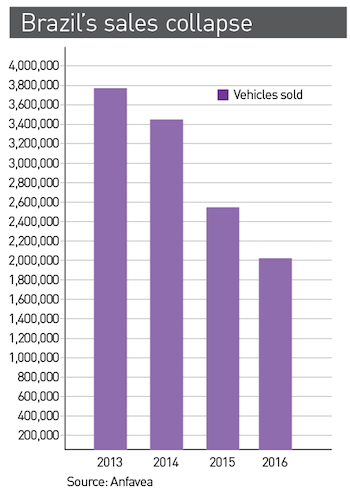 It’s not due to the unsuitability of vehicles. The days of Brazilian cars based on outmoded models long since vanished from European dealers are fast disappearing. For example, the VW Gol is no longer built on the Audi 80 platform from the 1970s but the same platform as the current European VW Polo and Audi A1.

Ford’s stuttering experience trying to sell the Brazilian-designed EcoSport in Europe (built in India) showed you might need to modify cars for more sophisticated roads and tastes, but it can be done.

Meanwhile, Jeep recently announced it would build its new globally sold Compass C-segment SUV at FCA’s plant in Pernambuco state, north east Brazil, as well as in China and Mexico. But the Brazilian output will just be for the local market and elsewhere in South America, whereas Mexico will supply the US and Europe.

“Exports look limited to the surrounding region. Which is not fantastic since the region is relatively weak and volatile,” IHS’s Da Silva said. Further afield and Brazil’s currency volatility comes into play. “This has a direct impact: the economic equation of exporting the Jeep Compass to country X might be very positive in April but become a total disaster in September due to currency fluctuations,” he said.

South America’s second biggest market of Argentina suffered in terms of production numbers, falling 10% in 2016 to 472,776. That’s almost half what it was in 2011. However, sales were a South American hotspot, rising 23% to 721,411 according to the local automotive association Adefa.

Argentina’s automotive production has suffered both from low home market demand and over-reliance on its biggest export market, neighbour Brazil. Last year, exports fell 21% to just over 190,000 with a whopping 72% heading over to Brazil.

Brazil’s cold is definitely catching in this region. Mexico was its next big export market with a meagre 8%. 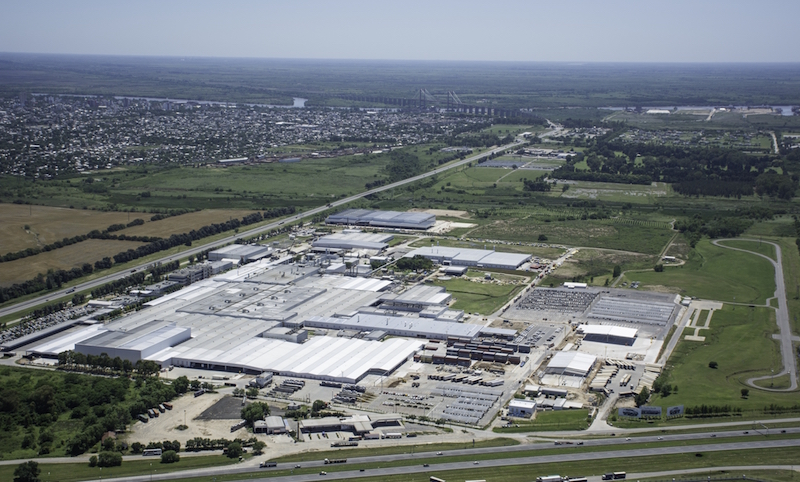 Major expansion at Toyota’s Zarate factory near Buenos Aires, which makes the Hilux pickup and SW4 SUV, has taken capacity to 140,000

But Argentina is carving out a nice little niche for itself that could help it produce cars with global appeal. Much as Thailand has achieved, the country is becoming a regional hub for pickups. In March last year, Toyota completed the expansion of its Zarate factory near Buenos Aires where it makes the Hilux pickup and related SW4 SUV that increased capacity from 92,000 to 140,000. It’s a far cry from the 20,000 capacity when the plant first started in 1997.

Mercedes-Benz is the latest to site pickup production here, choosing partner Renault’s plant in Cordoba to build its Nissan Navara based pickup, dubbed the X-class, starting 2018. This will be for export across Latin America, the company said. Also building pickups in the country are Ford, with the Ranger, and VW with the Amarok. The key has been to build a supplier network capable of building parts for these lower-tech vehicles, Federico De Cristo, an economist at Austral University’s School of Business Management, told the Buenos Aires Herald last year.

Meanwhile, Argentina’s government confirmed last year that PSA will invest $320m to modernise its plant in El Palomar near Buenos Aires. That will allow to make cars on a new platform, beginning 2019.

The country’s auto industry will grow again, predicts IHS analyst Carlos Da Silva, but don’t expect fireworks. “Argentina is facing the same hurdles as Brazil: a national market too weak to bring stability and feeble prospects of offsetting through exports.”