The Audi R8 series of sports cars is described as being closer to motor racing than any other on-the-road vehicles. Mike Farish takes a closer look at the manufacturing operation 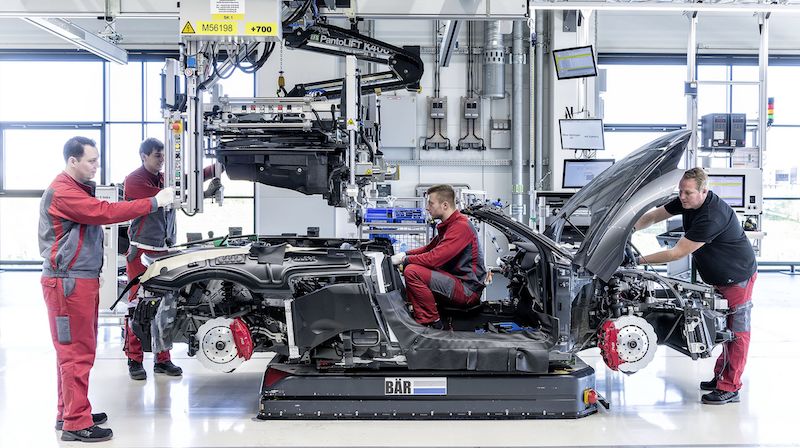 The latest versions of both the Coupe and Spyder convertible variants of the R8 are made at Audi Sport’s Böllinger Höfe factory a few miles outside Heilbronn in south-west Germany. The 30,000 sq.m facility has been in operation for just four years. It started up in September 2014 to manufacture the second generation of the R8, which went on sale in 2015 and for which the new quattro and performance quattro are effectively upgrades. The cars had previously been made at the Audi plant in Neckarsulm about 10km away.

The specific dedication of the Böllinger Höfe site to the requirements of the vehicles is explained by Wolfgang Schanz, head of R8 manufacture. “It was developed as a small series centre,” he states, adding that a fundamental guiding principle was to ensure the “flexibility” necessary to ensure efficient production of vehicles in which every assembly coming down the line will be different from the one in front and behind it.

Another aim was to ensure that, given the relatively small production volumes that would necessarily be the case at the site, the investment involved would be not be disproportionate. Schanz notes that there is a deliberate emphasis on ensuring that, as far as possible, people rather than machines carry out production operations in order to ensure the desired quality levels.

Nevertheless, automation is applied where the company feels it provides a superior option to manual operations. This is exemplified, for instance, in two robot cells found in bodyshop applications before the much more people-intensive assembly operations commence. But it is also evident in the use of completely autonomous automated guided vehicles (AGVs) not just to transport vehicle assemblies from the bodyshops to the assembly hall, but also from station to station for all the assembly operations. The use of the AGVs is less to do with supplanting people and more about avoiding any form of fixed, ‘hard’ automation for materials and vehicle assembly movement that would militate against the flexibility that Schanz highlights. As such, a type of technology conspicuously absent from the plant is any form of conveyor belt.

Effectively the plant comprises two bodyshops, named KB1 and KB2, the assembly hall and a test area. The first of those is concerned with metal work and the initial operations carried out there involve the fabrication of basic vehicle frames. Although the overall character of the plant is one of highly skilled manual operations interspersed with instances of intense automation, the very first operation performed surprisingly old-fashioned and low-tech – the manual welding of metal parts delivered from external suppliers. The materials involved are invariably aluminium for the road cars, but to some extent steel for the race cars given the forces they may be subjected to in use.

In contrast, this is then followed by processes in a completely automated robotic cell comprising four Fanuc R-2000iB robots that work together in two groups to carry out punch-riveting on the completed frames. “There are always two robots for one body,” Schanz confirms. The key criteria for automating this process are, he says, “force and precision”. He adds that there are 600-650 points in each assembly where the robots are used to punch through the metal. After that the bodies actually leave Böllinger Höfe entirely and are transported to Neckarsulm for painting before returning to enter KB2, which is essentially devoted to the application of carbon-fibre-reinforced polymer (CFRP) parts to the vehicle assemblies.

Manual and automation in the mix

In KB2 the company augments the human-centred processes with automation. Application of the adhesive used to fix the CFRP parts to the metal assemblies, and the subsequent transfer of the parts across to the waiting assemblies, are an entirely robotic process. “We just could not achieve the consistency of application and accuracy of positioning required for this process by hand,” Schanz states. But the final positioning of the parts and also the necessary supplementary mechanical fixings are then carried out manually. After that the assemblies undergo a 20-minute oven bake at 80°C to ensure maximum effectiveness of the adhesion.

One more process follows before the assemblies move from KB2 to the assembly hall. This is a light tunnel in which the assemblies are inspected to ensure the paint finish has not been compromised in any way by the CFRP part application procedure. This inspection procedure is, carried out entirely by a specialist operative who walks round the vehicle body scrutinising it for any possible blemishes solely by eye.

Up to this point the physical movement of the assemblies has been effected by the simplest of means – being manually pushed from process to process on simple, unpowered trollies. But from then on a crucial step change in the level of technology involved takes place with the introduction of the AGVs, which first carry the assemblies down a long corridor from KB2 to the assembly hall and then move them between stations during the assembly process. Schanz confirms that the AGVs utilise several technologies to ensure both the safety of people who work in proximity to them and their effective functioning as autonomous but ‘intelligent’ systems. These include sufficient on-board processing power to ‘remember’ and navigate the required movement path, sensors to detect any anomalous obstacles – most obviously people – and trigger an immediate stoppage, and radio frequency identification (RFID) tags to indicate the required procedures at each stage of assembly.

Schanz is also confident that Böllinger Höfe leads the way in the use of the high-tech AGVs. Something similar is, he says, now in use by Audi’s “daughter company”, as he terms it, Lamborghini in the manufacture of its new Urus vehicle, but otherwise there is currently no similar system of comparable sophistication within Audi.

Benefiting from skills and experience

Altogether there are 15 assembly stations in a U-shaped configuration in the assembly hall, which works on a single-shift basis five days a week to convert into finished vehicles the output of KLB1 and KB2, each of which operate on a two-shift system. Both stations are equipped with monitor screens displaying the required operations to the personnel – Schanz notes that this is a paperless operation. But, as he also confirms, the crucial enabling factor is simply the skills and experience of the people involved. Conventional training in on-site facilities plus direct on-the-job experience are provided, but a key further element involves initial recruitment.

As Schanz explains, most assembly workers at Böllinger Höfe are recruited from the workforce at Neckarsulm and so already have many of the necessary skills and also knowledge of the company’s ethos. Moreover, the move from the more mainstream car plant to the smaller operation is, he says, regarded as prestigious and there is never any shortage of applications when vacancies occur. Nevertheless, it is still likely to be a minimum of four weeks before even such an experienced recruit will be deemed able to work independently on the production line.

This recruitment policy underscores the somewhat symbiotic relationship between Böllinger Höfe and Neckarsulm, which is also evident in the way the latter’s paintshop facilities serve the requirements of R8 production. Another is that the logistical centre providing parts for both plants sits alongside the manufacturing building at Böllinger Höfe. “We work together,” Schanz observes. “Ultimately we are the same company.”

Once shopfloor workers – “colleagues” is Schanz’ preferred term – are firmly established at Böllinger Höfe they will, he says, usually be trained in the tasks associated with at least three stations. That is the minimum necessary, he explains, to provide the interchangeability required to support the teamworking structure that operates on the factory floor. The roughly 350 shopfloor workers across the bodyshops and assembly hall are, he says, grouped into teams of eight to ten individuals, each with a designated team leader. Beyond that the management structure is surprisingly light – just a small number of wider area managers and then Schanz himself. There are also another 150 personnel on the site to make for a total employee roster of around 500. 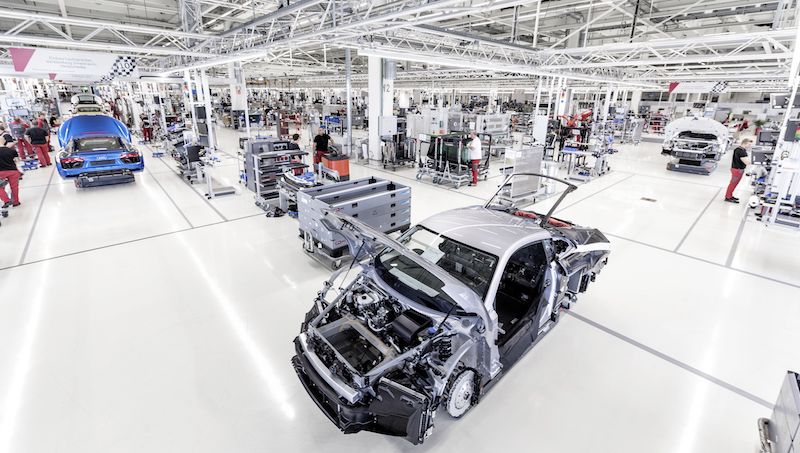 There are no additively manufactured parts in any of the cars made at Böllinger Höfe but Schanz confirms that the capability the technology offers to create customised tooling for use by assembly workers is being exploited. Currently there are three additive machines in use at the site. These are: Makerbot X2 using the FDM (fused deposition modelling) technique; German ReRap X400, again an FDM machine; 3D-Systems’ SLA3500 stereolithography (SLA) machine.

Schanz describes several applications of the technology. One instance involves the positioning and mounting of the cockpit inside the vehicle, which is different according to whether the vehicle is right-hand or left-hand drive. 3D-printed plastic adapters or ‘paddles’ have been produced for use with the handling device for cockpit installation in order to facilitate optimal mounting of the dashboard in the vehicle. “Since the cockpit installation runs differently in the right-hand drive and left-hand drive vehicle, the paddles have different colours,” he adds. “A deployment box for them has been printed as well, so each paddle is always in the right place at the assembly line.”

Another is aimed at ensuring maintenance of pristine surface finish of parts. “Assembly staff use a variety of different tools directly on the vehicle every day,” Schanz explains. “So, in order to avoid accidentally scratching components, negative moulds have been designed from plastic, printed and then poured out with liquid silicone to create individual covers for individual tools. They protect the car against possible damage during assembly.”

A device has also been produced to support the ergonomics of the manual welding procedures that form the initial step in the whole manufacturing process. “The printing experts have developed a plastic orthosis for working with welding equipment,” Schanz says. “A black fabric strap securely holds the welder by the hand so that the employee does not have to hold it tight, but can relax their fingers. A printed plastic part provides comfort for the palm and connects the welder to the back of the hand. It serves as an orthosis, which relieves the tendons during welding.” He adds that this idea was developed with input from the employees involved.

This use of 3D printing represents one of the ways in which manufacturing operations at Böllinger Höfe have been enhanced since the plant first opened. Schanz says the technique was first introduced two years ago. More recently – just 12 months ago – ‘intelligent’ screwdrivers that can record key parameters, such as torque forces, came into use and are now used for about a thousand of the two thousand or so screw points in each car. “We are always looking for ways to improve things,” he confirms.

Last year all these operations came together to facilitate the production of 120 GT4 race cars and around 3,000 road cars. Total production time per vehicle is about 100 hours, of which 30 hours are in assembly. In addition, about 80 GT3 race car bodies were also made at the site. But in 2020 the mix will get even more varied when electric vehicles will also start to be made at Böllinger Höfe. There will obviously be some dedicated operations specifically for the newcomers, but once assembly starts Schanz confirms Audi will maintain its policy of ensuring all the cars made at the plant will be made to order by the same people: “They will all come down the same line,” he concludes.