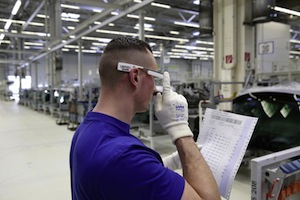 Germany – Following a three-month pilot phase, the plant is rolling out 3D glasses to logistics personnel for use during order picking. Volkswagen says the aim is to improve process security in production.

The smart eyewear enables personnel to keep both hands free while working, displaying information such as part numbers and storage locations directly in their field of vision; operation is by touch or voice control. A camera built into the glasses can also be used as a barcode reader, with correctly selected parts shown in green and incorrect ones in red.

The roll-out is occurring on a gradual basis; wearing the glasses is voluntary, and workers go through an acclimatisation period. Currently, they are being used by 30 personnel with responsibility for components such as windshields and driveshafts, but other departments, plants and brands also plan to introduce the technology, says the OEM.