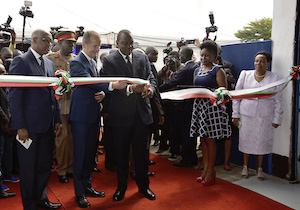 Kenya – The first vehicle off the production line was a Polo Vivo, a bestseller in Sub-Saharan Africa. The factory at Thika, which is a joint project with DT Dobie, will be able to produce up to 1,000 cars per year in its initial phase. Its annual capacity may be increased to 5,000 in the long term.

“After over 60 years of Volkswagen vehicle production in South and North Africa, I am delighted to now have a further site in Kenya,” said Herbert Diess, CEO of Volkswagen. “We will systematically continue to develop our position in the fast-growing African car market.”

According to Volkswagen, the new assembly facility has been “flexibly designed” to handle the production of additional models in future. The personnel are being trained by Volkswagen Group South Africa, although the vehicle-maker is currently investigating other training initiatives.

Volkswagen says that Kenya is an “opportunity market”, with the strongest economy in the East African Community and a position as a transit country for trade in the region.

The new plant joins one in South Africa and another in Nigeria as part of Volkswagen’s production network on the continent. The company also recently announced plans to start making vehicles in Algeria. Volkswagen has assembled cars in Kenya previously, producing Beetles there in the 1960s.