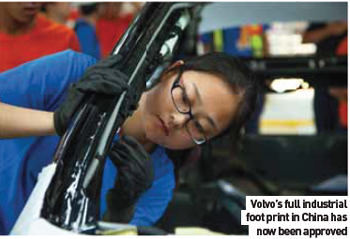 The assembly plant in Daqing is under construction and the first pre-series cars will be built in late 2013 for training purposes. The plant is forecast to be fully operational in 2014.

The engine plant in Zhangjiakou will become operational during the autumn of this year and will deliver engines to Volvo Cars’ manufacturing plant in Chengdu, where serial production will start in the fourth quarter of 2013.

Zhangjiakou will also supply the assembly plant in Daqing.

The company states that plants in China will be operated in full accordance with Volvo Cars’ manufacturing standards and procedures, equal to those of the company’s European plants.