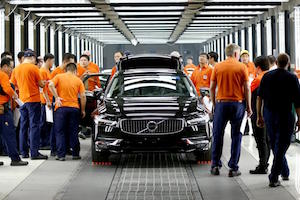 China – The vehicle-maker outlined a new strategy which will involve a significant increase in capacity in the country and the development of a global manufacturing and export hub serving growing demand for Volvo’s new range of cars in the US, Europe and Asia Pacific.

Volvo said it will make S90-series cars on its Scalable Product Architecture (SPA) at Daqing, Heilongjiang Province, and eventually move the new S90 premium sedan from Europe to China. It will also build existing and future 60-series, medium-sized SPA cars at Chengdu, Szechuan Province, and produce 40-series, smaller cars on the Compact Modular Architecture (CMA) at a forthcoming plant at Luqiao, Zhejiang Province. The Luqiao factory, operated by Volvo but owned by Zhejiang Geely Holdings, will additionally make CMA-based cars for LYNK & Co, the new car brand launched in October by Geely Auto.

“With three plants – and the designation of one car line for each plant – Volvo creates an efficient production structure ensuring future capacity for growth,” commented Håkan Samuelsson, president and CEO of Volvo Cars.

Volvo will continue to make 90-series and 60-series SPA cars at Gothenburg, Sweden, but its Ghent plant in Belgium will focus exclusively on 40-series CMA models. The factory at Ridgeville in South Carolina, which is currently under construction, will produce SPA-based vehicles for the US and export markets. All plants will adhere to the Volvo Car Manufacturing System (VCMS) to ensure global production and quality standards.