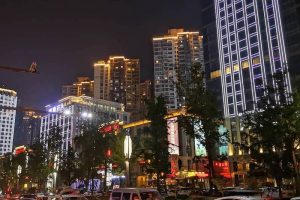 The 2018 Global Automotive Forum brought together government officials, senior executives, academic experts and journalists from all over the world in order to discuss China’s automotive industry. Key themes included technological innovation in the fields of autonomous driving, new energy vehicles and connectivity. There were also several debates centred on the globalisation of cars and vehicle components manufactured in China.

The event was hosted in the city of Chongqing – a sprawling high-rise metropolis that is built on a mountainous area and dissected several times by the world’s third longest river, the Yangtze. According to some estimates, the population of greater Chongqing outclimbs Shanghai at around 31.5 million, but the city proper has a population of about nine million.

Although enormous in size, Chongqing is off the beaten track when it comes to tourists. It is home to a large hub of industrial activity, with enormous factories dominating the landscape in the outer suburbs, churning out everything from cars to carpets. As a result, it has a distinctly different feel compared to more westernised cities such as Beijing and Shanghai.

An article published in 2016 by China Daily suggested that Chongqing is the largest vehicle manufacturing centre in China, with over three million units produced in 2015 alone. This accounted for 1/8th of the total vehicle output in the entire country. Several Chinese vehicle manufacturers such as Changan, SWM Motors and Lifan operate giant plants in the area, while Hyundai leverages a joint venture with BAIC to make over 300,000 units a year at its local plant.

These companies are now looking to safeguard their future by producing vehicles that are compliant with evolving consumer demands as well as government regulations – a tricky balancing act, but one that Su Ling, deputy general manager of Changan New Energy Automobile Division China, believes is possible. She outlined the company’s strategic plan that was put forward in 2017, in which it aims to electrify its entire product portfolio by 2025.

Ling also suggested that the company was working to integrate intelligent connected car technologies in its new energy vehicles, allowing its customers to take advantage of various new in-car services. Similarly, Xia Heng, co-founder and president of XPeng Motors China, believes that the trends of connectivity and new energy will converge, but also pointed to the importance of artificial intelligence (AI). He believes it will play a crucial role in making cars safer.

It’s difficult to see how these kind of technologies will fair in cities like Chongqing, though. The sheer density of its population means that traffic is always heavily congested. Local drivers squeeze through tiny gaps, muscle their way through queues and perform wild manoeuvres without so much as a glance in a mirror. The roads provide a sensory overload, and will require a huge amount of sophistication and refinement if autonomous vehicles are to operate safely. Furthermore, the lack of space in the overcrowded city means that the construction of charging stations would likely necessitate the destruction of other buildings.

For more on China’s NEV market, read our EV Supplement.