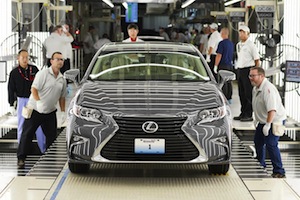 US – The OEM reports that it made a record 2,035,028 vehicles and 1,933,702 engines, citing the “key drivers” for its increased production as low fuel prices, an improving economy and strong demand for the Corolla, Camry, RAV4 and Tacoma. Last year also included a number of production launches and milestones.

Toyota’s factory at Georgetown, Kentucky, produced the first US-built Lexus, the ES 350, after a $360m investment and the expansion of its workforce by 750 personnel. San Antonio, Texas, began making the new Tacoma, while Toyota Baja California introduced a three-crew/three-shift operation to meet demand for this pick-up. Additionally, as part of a manufacturing collaboration, Mazda’s plant at Salamanca in Guanajuato, Mexico, started turning out the Yaris and the Scion iA.

In 2016, Toyota will celebrate several plant anniversaries: Ontario (where the Cambridge facility will turn 30); Kentucky (30); Indiana (20); West Virginia (20); Alabama (15) and Mississippi (five). The OEM will also welcome the groundbreaking of its 15th facility, at Apaseo el Grande, Guanajuato, which will begin production in 2019.