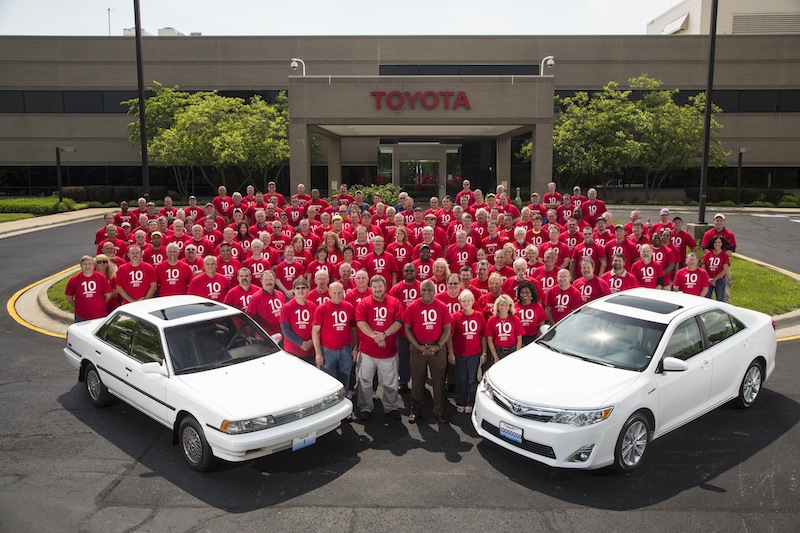 They were known as the 'Big Three': General Motors, Ford and Chrysler. Together, they mobilised the post-World War Two ‘American Dream’ and put wheels under the freedoms enshrined in US national culture. The carmaking hub of Detroit had never had it so good. But since the early 1960s, a series of events has shaken America’s confidence in its automotive industry, from Ralph Nader’s 1965 book ‘Unsafe at Any Speed’ to the 2008-2009 global banking collapse which threatened to put closure notices on the gates of Detroit’s car factories.

Meanwhile, since 1957 a once little-known car company called Toyota has been progressively expanding its footprint in America. It established a joint venture with GM to build cars in Fremont, California, in 1984, and set up its first independent US manufacturing facility at Georgetown, Kentucky, in 1986.

Toyota now makes almost 1.9m cars and light trucks per year in the US, Canada and Mexico. In the first five months of this year, it sold 1.02m vehicles in the US alone – more than Chrysler and only 40,000 fewer than Ford. Three-quarters of them were built in the US and many of the imports came from its neighbours north and south. Toyota’s Camry was the top-selling passenger car in America over the same period, and the Corolla/Matrix was number two. The 'Big Three' is now very much the 'Big Four'.

Toyota operates nine plants in the US, Canada and Mexico and also has a shared facility with Fuji Heavy Industries (Subaru) at Lafayette, Indiana. The number of independent Toyota facilities in North and Central America will reach double figures in 2019 with the opening of the company’s second Mexican site, at Guanajuato. This will be accompanied by the most intense period of change in the company’s history to accommodate the Toyota New Global Architecture (TNGA). It is the biggest overhaul in the way the company builds cars since the introduction of the Toyota Production System, which was for years regarded as the gold standard in automobile manufacturing.

A new global system
TNGA, like the Volkswagen Group’s MQB or the Renault-Nissan Alliance’s Common Module Family architectures, is a system to build a greater variety of cars more cheaply. Toyota reckons it can slash production costs by a fifth, not least by slimming down the estimated 100 platforms and 800 engine variants it takes to churn out today’s global product range. All key interior components, from steering wheels to airbags, will be dictated by five standardised seat heights, depending on factors such as whether the car is a saloon, a crossover or an SUV. The construction methods will allow bodies to be up to 65% stiffer, with knock-on advantages for crash safety and, in conjunction with lower centres of gravity, vehicle dynamics. Moreover, today’s ‘just-in-time’ parts delivery system will become ‘right now’.

Manufacturing machinery will become dramatically more compact, modular and flexible in what it can do, Toyota says. That will make factories smaller and, consequently, more energy efficient. But they will also become more human-friendly, with the workers finding it easier to walk around and perform tasks faster than robots (something of a role reversal).

The introduction of TNGA will mean major upheaval for Toyota’s Stateside plants, especially in relation to what is built where. Once the $1billion Guanajuato facility becomes operational, it will take over production of the Corolla from the Cambridge North plant near Ontario; Guanajuato’s 2,000 workers will be able to build 200,000 units of the next-generation Corolla per year. Cambridge North will switch to producing as yet unspecified higher-value mid-sized vehicles and will benefit from the first significant new investment in the site since it opened in 1997. “Our objective is to maintain our [3,000] team members,” said Brian Krinock, president of the company’s Canadian operations. “The new system is an improvement over what we do today, and that’s all about having the ability to respond to the market.”

There will also be new investment at the nearby Woodstock, Ontario, site to implement TNGA for the next-generation RAV4. Cambridge South, meanwhile, will continue to produce the recently launched Lexus RX 350 and 450h, turning Toyota Motor Manufacturing Canada (TMMC) into a hub for more profitable, upmarket vehicles based on common platforms. This grouping strategy will be repeated throughout Toyota’s North and Central American plants. Jim Lentz, the CEO of Toyota North America, described TNGA and the decision to build the Guanajuato plant as “a model for the future of global manufacturing” and a “strategic rethinking of how and where we build our products”.

A fresh start in Mexico
Guanajuato will be Toyota’s second Mexican site, joining the Tijuana plant which assembles Tacoma pick-up and flat-bed trucks, and will have an annual capacity of just over 250,000 vehicles, plus a 700-strong workforce. Guanajuato is the first new production facility to be sanctioned by Toyota since 2011, when CEO Akio Toyoda placed a three-year moratorium on additional production sites. This was not so much a response to the global recession as a major step in the plan to raise productivity to 90% at all of the company’s plants. “An increase in production does not mean an undisciplined pursuit of more,” he said, possibly to calm investors shaken by the huge recall campaigns which followed the last great push for volume. “This investment represents our long-held principles of continuous improvement and challenging ourselves to always do better.”

In future, America’s southern states will be responsible for the production of compact, lower-profit models, while the more operationally expensive plants in the north will focus on larger, higher-return products. The next-generation Corolla will not only be made at Guanajuato from 2019 but also at the plant in Blue Springs, Mississippi, which has been producing the current model since September 2013. Blue Springs is something of a first-reserve factory, having been set up to make the Highlander and then the Prius before losing out on both. It finally opened to build the previous Corolla in 2011. It too will require heavy investment to accommodate the TNGA architecture.

Georgetown’s giant plant
The first wholly owned Toyota factory in the US, at Georgetown, Kentucky, was opened in 1986 and is now the company’s largest plant outside Japan. It began making the Camry in May 1988, initially with engines shipped in from Kamigo in Toyota City, but since 1990 it has had its own onsite powertrain facility.

Georgetown now has an annual capacity of 500,000 vehicles and 600,000 four-cylinder and V6 engines. It currently makes the Camry and Avalon saloons, with combustion engines and hybrid powertrains, as well as the Venza crossover, and this year added the Lexus ES saloon to its portfolio, which required an investment of $360m and an increase in the workforce of 750. “Lexus was founded in the United States so it is only fitting that we are bringing the production of luxury sedans for our US customers back to where the brand was born,” said Toyoda.

Toyota now makes almost 1.9m cars and light trucks per year in the US, Canada and Mexico. It sold 1.02m vehicles in the US alone in the first five months of 2015 – more than Chrysler and only 40,000 fewer than Ford

The Camry has also been made at the Subaru of Indiana plant since 2007 at the rate of 100,000 a year so as to help Toyota meet demand, but this arrangement will cease next year, with production likely to shift to Cambridge North. That will help Subaru to overcome a chronic shortage of capacity to make its own vehicles in the US. However, Toyota could switch the Camry to its own Indiana plant in Gibson County. This plant, near Princeton, was established in 1996 and now employs 4,700 people. In March this year it turned out its four-millionth vehicle.

The factory began by building the Tundra, Toyota’s first full-size pick-up truck, but since 2008 that has been made solely at a 2,600-acre site near San Antonio, Texas, alongside the smaller Tacoma pick-up. Princeton is now the home of the Sequoia, a full-size SUV; the Sienna minivan; and the Highlander and Highlander Hybrid mid-size SUVs. The plant is currently being expanded at a cost of $100m to make space for an additional 30,000 Highlanders a year, with the creation of 300 new jobs.

The broader footprint
Toyota’s other manufacturing facilities in the US are at Buffalo, West Virginia, where $90m has recently been spent to increase engine and transmission production, creating 80 additional jobs, and at Huntsville, Alabama, which has benefitted from $150m to expand its machining capacity and V6 parts production.

The US-built Camry and Sienna score highly for local content. The Camry was the top-selling passenger car in America in H1 2015
Buffalo produces engines for the Sienna, RAV4, Lexus RX350, Highlander, Corolla, Matrix and the Pontiac Vibe, plus five- and six-speed automatic transmissions, while Huntsville supplies V6 and V8 engines for the Tacoma, Highlander, Tundra and Sequoia as well as four-cylinder, 2.5-litre and 2.7-litre units for a number of models.

That is not quite the extent of Toyota’s manufacturing footprint in North America, however. In Delta, British Columbia, a workforce of 310 individuals turns out 1.7m alloy wheels per year for global use. Furthermore, Toyota’s US manufacturing, design and engineering operations are masterminded from the Toyota Motor Engineering & Manufacturing North America (TEMA) nerve centre in Kentucky. TEMA develops parts for the adoption of the company’s vehicles in America, conducts research relating to energy and the environment and also operates Bodine Aluminium, which makes engine and transmission components in St Louis and Troy, Missouri.