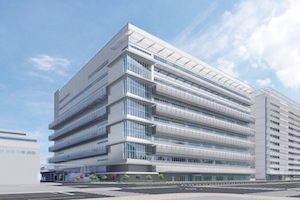 Japan - The OEM has revealed plans to construct a new building next to its Honsha Plant in Toyota City for the production of fuel cell stacks. Work on the exterior has already been completed, with the facility covering an area of 70,000 sq.m, and work on the interior is now beginning. At the same time, a new production line for high-pressure hydrogen tanks is being installed at the nearby Shimoyama Plant. Both are expected to start operating in 2020.

"As a technology, fuel cells are mature and ready to scale up," said the company. "Toyota took the lead in bringing to market the mass-produced fuel cell sedan, the Mirai, in December 2014. Annual production and sales have increased yearly, going from about 700 units in 2015, to around 2,000 units in 2016, and, most recently, approximately 3,000 units in 2017."

The OEM wants to encourage more widespread use of fuel cell vehicles, and aims to sell over 30,000 units each year by 2020. In Japan alone, it hopes to be shipping at least 1,000 units to customers every month.

According to Portland-based Allied Market Research, the global fuel cell vehicle market was valued at US$278m in 2016 and is projected to reach at US$12 billion by 2023, marking a CAGR of 72.4%. It highlights the Asia Pacific region as the biggest growth market for the segment, and lists Toyota among the manufacturers that could benefit from the trend along with Honda and Daimler.