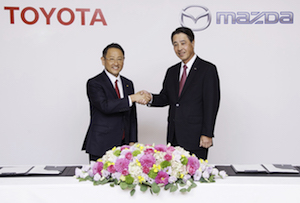 US – The two companies have signed an agreement to enter a business and capital alliance which will include the production of vehicles in the US. Toyota and Mazda have also pledged to jointly develop connected-car and electric-vehicle technologies; collaborate on advanced safety technologies; and to expand complementary products. The OEMs will take shares in each other’s business.

The proposed plant in the US would have an annual capacity of 300,000 vehicles and focus on the production of the Toyota Corolla plus new Mazda crossovers for the North American market. The factory would require an investment of $1.6 billion, shared equally, and a 4,000-strong workforce. Following on from product and technology collaboration, the US plant is intended to improve the companies’ competitiveness in manufacturing. Mazda would be able to develop a production structure to support its growth in North America, while Toyota said it would “further pursue management that is closer to the region”. Toyota has changed its plan to make the Corolla at its forthcoming plant in Guanajuato, Mexico, where it will now make the Tacoma pick-up truck. The OEM claimed that there will be “no substantial impact” on its investment and employment in Mexico.

Meanwhile, the expansion of complementary products will be explored on a global level, beyond the existing supply of a compact sedan by Mazda to Toyota in North America and the imminent supply of a 'two-box' van by Toyota to Mazda in Japan.

The new alliance between Toyota and Mazda builds on an agreement signed in May 2015 to develop an ongoing collaboration. Speaking of the next step in their partnership, Mazda’s president and CEO, Masamichi Kogai, expressed his hope that the new alliance will “energise the auto industry… by bringing together two competitive spirits”, while Toyota’s president, Akio Toyoda, said it increased his company’s “sense of not wanting to be bested by Mazda”. The share acquisition is due to be completed in October this year, but the capital alliance may be further strengthened in line with business progress, said the two OEMs.