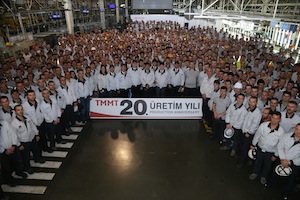 Turkey – Over the course of two decades, the Toyota plant at Sakarya has produced more than 1.5m vehicles. With 85% of its planned 135,000-unit output for 2014 destined for export, the facility ranks in the country’s top ten exporters.

The plant has produced the 7th, 8th and 9th generation of Corollas, including the wagon version, plus the 2004 and 2009 Versos. Last year, Sakarya was chosen to produce the 11th generation of Corolla for Europe. “This was a sign that we are competitive enough to build such an important vehicle,” commented Orhan Özer, president and CEO, TMMT. “In addition, locating production here in Turkey takes advantage of our proximity to Eastern Europe, Turkey and the Middle East, regions where Corolla is quite popular.”

Operating within the Sabanci group as Toyotasa, the Sakarya plant started as a CKD facility in 1994, mainly serving the domestic market. The Toyota Production System was used from the start of operations, and manufacturing leaders received training in Japan. “Our level of quality measured during quality audits is the same as that of our factories in Japan,” stated Özer. Exports began in 2002 and the key markets today are: Europe, North Africa, the Caucasus, the Middle East and Central Asia.

“We fully believe in the potential for long-term economic growth in Turkey, and trust the capability of the Toyota members here,” said Didier Leroy, president and CEO of Toyota Motor Europe, on the site’s 20th anniversary. “This plant is competitive, and we have decided to increase production at TMMT in the future and are now studying how exactly this will take shape.”