The power of engine production in Dundee, USA 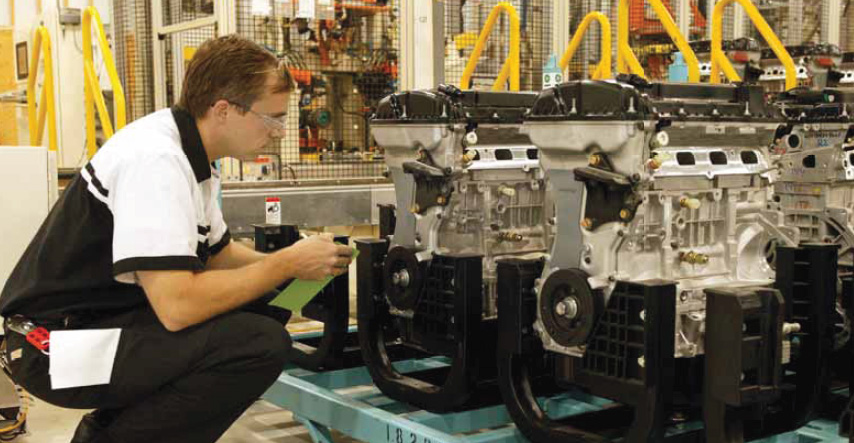 Located 60 miles southwest of Detroit, the Dundee engine plant—formerly known as the Global Engine Manufacturing Alliance (GEMA)— epitomises Chrysler Group’s drive for state-ofthe- art manufacturing. The production complex’s North plant, launched in October 2005 and the South plant, launched in November 2006, offer 1.16 million square feet of floor space and have been virtually transformed within the past two years in order to achieve a lean and sustainable operating environment. 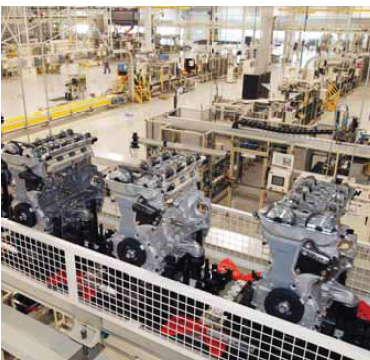 World class manufacturing
Kevin Sell, Plant Manager, points out that the Dundee Engine Plant, as well as all of Chrysler Group’s manufacturing facilities, has adopted World Class Manufacturing (WCM), a production philosophy based on 10 managerial and 10 technical pillars, of which one is Safety, Hygiene, and Working Environment. Other pillars include Cost Deployment, Autonomous Activity and Quality Control. The goal of WCM is to improve safety, quality and productivity while driving out waste. “Our focus is on waste elimination. WCM is also about improving the measurement of throughput and loss. We use stratified data to determine where the biggest losses are and attack those using the WCM methodology,” says Sell. We are making drastic improvements in all pillar areas. In fact, the Dundee plant just achieved a Bronze ranking, the first milestone toward achieving World Class status.”

The Dundee Engine Plant’s design represents a big change from eighteen months ago. Reorganisation included reducing the layout from seven workstations in one zone to four work stations. The work stations are organised such that parts are delivered to the employee in the “Golden Zone,” the optimal point where there is no wasted motion allowing employees to concentrate on their job; workplace organization is a pillar of WCM. Adds Sell, “It involves looking for motion economy for the operator as well as ergonomics.” Parts are kitted and placed on a pallet for the operator. The kit presents parts in the proper work order. Sell points out that this is ergonomic and it minimises variation. “Reduced variation means better quality,” says Sell. In the past, one had to take a couple of steps in order to pick up a part. Kitting builds in more quality enterprise-wide. “For example, spark plugs used to be elevated as they came to the line. Now, they are delivered directly to the operator. We use two different spark plugs, but the system presents only the correct one to the operator, eliminating possible errors,” he says.

Key to the plant’s success is the nearly 600 employees, both hourly and salaried, that work there. Employees have at least two-year degrees. There are four team leaders for one assembly department, which is one team leader for eight to ten team members. “The WCM core is an employeedriven program. Employees have a target to submit 10-12 suggestions per year. Employee suggestions measure the engagement of the workforce. The United Auto Workers (UAW) contract pays a bonus based on WCM metrics,” reveals Sell.

Sell points out that most employees know multiple jobs. At each station, there is a standard operating procedure, which depicts the sequence of events and highlights the safety and quality risks with pictures and word descriptions. As the plant works on improvements within the 20 WCM pillars, it established a model area dedicated to safety, which is a vital aspect of eliminating injury and the need for first aid. “We identify unsafe conditions and unsafe acts before injury, such as walking and talking on the phone at the same time, and work to find a solution,” says Sell.

Chrysler also uses the Andon system to notify management, maintenance and other workers of any quality or process problems. The focus is a signboard which incorporates signal lights to indicate which workstation has a problem. The alert can be activated manually or automatically to stop the line and fix the problem. “Once we determine the quality, availability, and performance issues, then we can select the best WCM tool to analyze the issue, identify the root cause and fix the problem,” he explains. The plant’s maintenance team deploys these tools, such as a lack of preventative maintenance, for example. The team stratifies the loss and can then select the right tool to remedy the situation. Notes Sell, “We can eliminate the problem by identifying the root cause and implementing countermeasures to prevent future occurrences.”

Innovative products
Among the products that the Dundee Engine Plant produces in its WCM environment are the 2.0 litre and 2.4 litre World 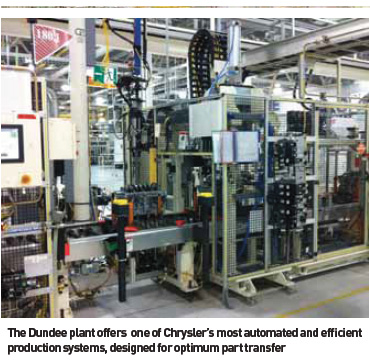 The plant also produces the Fully Integrated Robotized Engine (FIRE), a 1.4-litre engine, for which the plant is upgrading to an improved inspection system for the FIRE’s piston assembly. Chrysler also ships the FIRE to the vehicle assembly plant in Toluca which assembles the Fiat 500. FIRE engine plants are also located in Italy, Brazil, and India. The Dundee Engine Plant will be expanding its product line when it begins producing the 2.0 litre and 2.4 litre Tiger Shark engines for the Dodge Dart this summer, for which it recently purchased production machinery.

The Dundee Plant offers one of Chrysler’s most automated and efficient production systems and one that it designed for optimum part transfer. “The process is highly automated. Our goal is not to touch the machine or part,” says Sell. Among its robots, the plant uses an Automated Storage and Retrieval System (ASRS) to deliver the part to the point of use through a pull system.

The cylinder heads move across the space to be assembled. The commands to the robots come from the assembly line. Chrysler uses flexible Computer Numerical Control (CNC) equipment, which dramatically reduces the need for a machine operator. Within the ASRS is a sled that provides First In, First Out production to the assembly line. Explains Sell, “In order to determine where to automate, we do a cost benefit analysis based on cost, safety and quality.” The Dundee Engine Plant produces four variations of the engine block – which requires four different robot heads for which robots handle the part variation. The engine production process begins with dropping in a raw cylinder block casting from the supplier – the base of the engine. It then robotically loads to the line. “The block load on pallet is the beginning of the process. There are no forklift trucks or material handling equipment used,” says Sell.

The conveyance is a programmed gantry that picks up parts such as the crankshaft and delivers them to the assembly line. It detects by a feature on the part which of the robot’s programmes to run. It is the same process for the cylinder blocks, according to Sell. “We apply a dot matrix to the engine block that measures all data, including the bolt torques and a pressure leak test. The engine block contains data for life, which we can analyse,” he explains.

Quality testing
As a means of ensuring quality, the plant gauges all machined surfaces; all critical features receive an automatic gauge and a random operating gauge. Chrysler determines its control plan by the frequency of the checks. “We do a cold test on 100% of the products as well as a dynamometer (dyno) test. The dyno hot test runs through a 45-minute cycle on 3% of the engines,” says Sell.

For the finished surface on its crankshafts, the Dundee Engine Plant uses grinding for the crankshaft pin journals and crankshaft mains. For the engine block head, it uses hard turning, which utilises very hard, sharp cutting tools on lathes or machining centres. “The product determines the process,” says Sell. Among Chrysler’s recent and automated machinery purchases for the Dundee Engine Plant is brand new Fanuc robotic equipment for producing its latest engine models. It also uses the Loctite Pump a Bead II, which is an all pneumatic dispensing system for pumping Loctite anaerobic gasketing materials from 850 millilitre cartridges. The success of Chrysler’s Dundee Engine Plant stems not only from its innovative products and state of the art design and equipment, but also its dedicated and highly skilled workforce. The plant is an example of how the practice of WCM can lead to production efficiency improvements and create an environment that is conducive to growth.