As OEMs seek to reduce the fuel consumption and emissions of their vehicles, the lightweight material is becoming an increasingly important solution 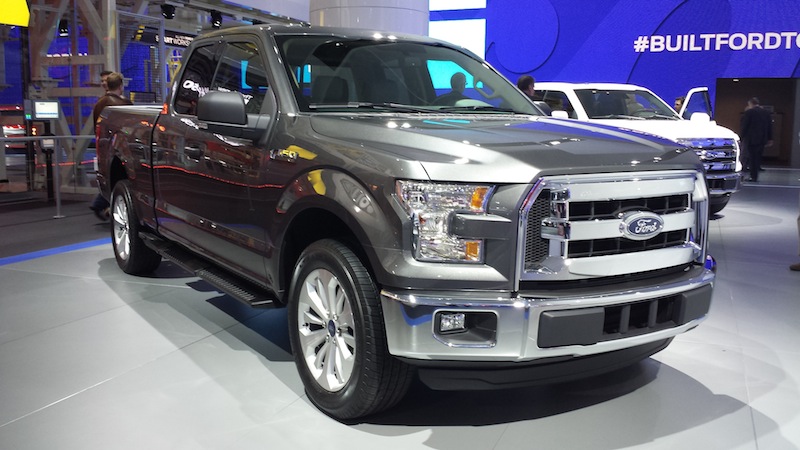 “In the next five years, you'll see more high-volume, mass-market cars with all-aluminium bodies”. This prediction was made in 2012 by Randall Scheps, marketing director of automotive sheet at Alcoa, following numerous enquiries from auto makers, which were even then planning a major expansion in the use of aluminium for body-in-white (BIW) production. Now, a couple of years later, we can see that this was not a case of wishful thinking by one of the largest providers of aluminium worldwide. Indeed, with the launch of Ford’s much-anticipated, all-aluminium F-150 pick-up truck, it is clear that Scheps was right on the mark.

Over the last ten years, the use of aluminium by major OEMs has in fact grown exponentially across the full spectrum of automotive parts, not just vehicle bodies. There are numerous reasons for the increased use of aluminium in the manufacture of light vehicles, and whilst the F-150 is definitely the most talked about aluminium vehicle at present, it is not only Ford that is making use of the many benefits aluminium can offer.

Older than you think
The weight-saving properties of aluminium are well-known, and the exploitation of these benefits in vehicle manufacturing actually goes back well over a hundred years. The very first sports car featuring an aluminium body was unveiled at the 1899 Berlin International Motor Show and the first engine with aluminium parts was developed by Carl Benz just two years later. But it was the substantial drop in the price of aluminium after the Second World War that enabled the use of the metal in mass production.

Another breakthrough occurred in 1961, when the British Land Rover company produced V-8 engine blocks made with aluminium cylinders. From that moment, aluminium gained a foothold as the material of choice in the production of wheels and transmission casings, later coming to be used for cylinder heads and suspension joints. So this long history poses the question: why is aluminium now being spoken about as the next big thing?

It all comes down to the fact that saving weight is becoming ever more important as fuel economy, battery range and carbon footprint become critical areas of focus for consumers and the industry as a whole. According to a study by Ducker Worldwide, the use of aluminium by OEMs will grow from an average of 147kg per vehicle in 2008 to 249kg by 2025, saving 81–92kg of direct kerb weight and 35kg of secondary kerb weight. For example, by replacing steel body panels with aluminium sheet metal, Ford has reduced the weight of the standard F-150 by 318kg.

The importance of saving weight can be seen by its effect on fuel consumption. Fuel savings of 5-7% can be realised for every 10% reduction in weight when traditional steel is replaced with aluminium in vehicles with a standard internal combustion engine. These figures increase to 13.5% in aluminium-structured hybrids, while aluminium-bodied diesels can achieve a 13.1% improvement in fuel economy.

Another major focus for automotive manufacturers is the reduction of  CO2 emissions. These emissions have become a major target for governments around the world, which are setting strict laws for maxiumum emissions. Among many technological measures employed in vehicle manufacturing to reduce CO2 emissions, lightweighting is one of the most effective, with 100kg saved in car mass being equivalent to a reduction of 9g of CO2 per kilometre.

An aluminium bandwagon
Ford is not the only OEM that has seen the benefits of using aluminium. Hot on the heels of its American rival, General Motors recently announced that it too is planning on using aluminium bodies for the next-generation Chevrolet Silverado and GMC Sierra, which are due to launch in 2018. According to the Wall Street Journal, GM has signed supply contracts with Alcoa and Novelis for these new pick-ups.

Following the announcement, Tom Boney, head of North American automotive business for Novelis, told The Detroit News: “There isn’t an automotive manufacturer that makes vehicles in North America that we’re not talking to.” He added: “Our customers will be making announcements fairly regularly over the next six years that will transform the automobile industry.” When one takes into account the pressure that American manufacturers are under to meet federal fuel efficiency standards, these moves make perfect sense. The Obama administration has decreed that, by 2025, automakers’ fleets must average 54.5 miles per gallon (or 4.31 litres per 100km).

However, as noted already, the increased interest in aluminium has not come out of nowhere. For example, over the course of nearly two decades Audi has undertaken extensive research and development work into aluminium as its material of the future. The Audi A8 with its all-aluminium body celebrated a world premiere at the 1994 Geneva Motor Show, followed by the A2 in 1999 with its make-up including 60% sheet aluminium, 22% aluminium castings and 18% extruded aluminium sections.

Audi’s trend towards using weight-saving materials is also noticeable in its cars' add-on body parts. The A6, for instance, has an aluminium engine hood. Most Audi models have high-strength aluminium side intrusion protection beams in the doors, with the TT Roadster’s hardtop set on an aluminium frame.

UK premium manufacturer Jaguar has also been a pioneer in the development of aluminium-bodied cars, introducing the XJ220 in 1992. The success of this project led the carmaker to mass-produce a number of aluminium-bodied cars, the first being the lightweight X350-series XJ, which was brought to market in 2003. While there were other commercially available aluminium-bodied cars before that, none of them was aimed at the mass-market and in most cases they were largely hand-built, low-volume products. 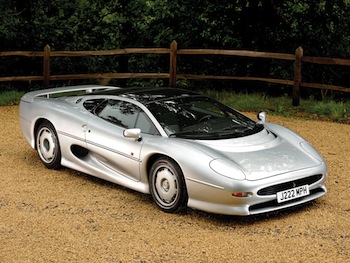 The company, now known as JLR, recently announced that its new compact sedan, the XE, will have an all-aluminium unibody when it launches in the UK next year. The car will appear in production some time this year, while the first US deliveries will occur in 2016. JLR is applying the same principles to its new Range Rover and Range Rover Sport models, with weight savings on both cars claimed to be in excess of 400kg.

More applications for aluminium
More interesting, perhaps, is the current secrecy of the Asian manufacturers. China actually produced 47% of the 46.5m tons of aluminium made in the world last year, only slightly more than it consumed. Great Wall Motors (GWM), probably China’s most internationally recognised automotive brand, has released many of its newest models with an all-aluminium 1.5 VVT engine, and one wonders if this could be the tip of the iceberg. Chinese aluminium production continues to outpace demand, growing 12% in 2013 with a net export surplus of 1.8m tons, while the rest of the world's output shrank by 1%. This means that the price of sheet aluminium is set to drop further, making it even more attractive to manufacturers worldwide.

At present, aluminium is being used for wheel, engine and some body applications, but the possible applications are more numerous. Special-grade aluminium is already being produced to meet strict quality requirements for BIW outer panels, as on the F-150, plus inner panels – structural parts which need to offer a combination of weldability, strength and crash resistance.

Besides BIW, aluminium is being used more and more for chassis applications such as engine cradles, rear axle subframes and suspension parts, reducing the unsprung mass and increasing ride comfort. Heat exchangers, heatshields, pressure vessels, shells for brake boosters and spring seatings are also benefiting from the unique qualities of aluminium, which combines excellent formability for complex shapes with high strength, as well as meeting the increasing demand for weight savings, higher comfort and more safety options. Pair this with the decreasing price of aluminium and suddenly all-aluminium cars do seem like the next big thing. 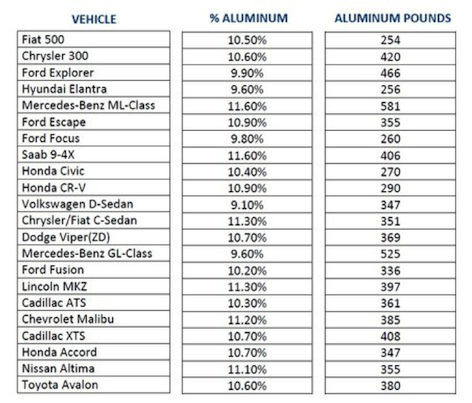