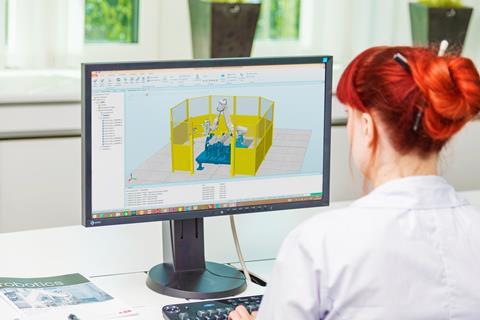 The need to keep automotive production lines running at their optimum performance means that the machinery and equipment used in those lines should be doing the same.

With robots playing a vital role in a multitude of production processes in automotive manufacturing, from Body in White and assembly through to the paint shop, it is vital to ensure that everyone deployed on a production floor is kept operating at peak condition in order to prevent disruption caused by an unexpected failure.

There are many factors that can affect the performance of a robot on the factory floor.

One is age. The long lifespan of industrial robots means that some of the units being used on automotive production lines are getting older. Understandably, manufacturers would like to extend their lifetime rather than replace large numbers of robots. Having clocked up thousands of operating hours, some of these will require more frequent maintenance to keep them in good running order.

Another factor is the need to avoid long Mean Time Till Repair periods – if the spare part is not on site, delays can occur while the part is ordered and delivered. The need to cover ’what if’ scenarios can also make it difficult to know how many spare parts to purchase, which can result in excessive spares holding, tying up capital and requires extra storage space that could be put to more productive use.

A third factor is the way robots are programmed and used. Factors such as incorrect usage, wrongly defined loads, high energy collisions, oil contamination or late oil change can all contribute to reducing the lifetime of the gearbox and an increased risk of premature failure.

Until now, predicting wear and tear on robots and their component parts has not been an easy process, especially in applications where several hundred may be deployed. In the same way that some human workers work harder than others, handling heavier tasks or operating more quickly, so the same is true of robots. Robots are not all subject to the same stresses and wear, even robots of the same type on the same production line. The differences are down to the robot program, which sets the motion cycles and dynamics for each axis. These can differ greatly depending on the tasks and degree of manipulation of parts required for each task. 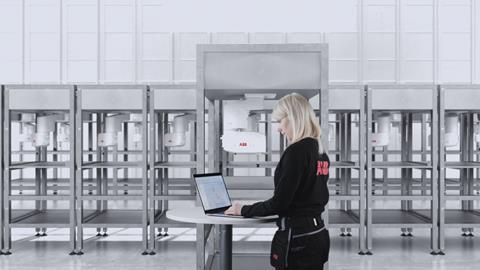 Different robots can therefore be subject to widely different stresses, but the most highly stressed units may be only a small number of the total number of robots in a production line. These tend to be “bottleneck” robots dealing with, for example, the processing of complex parts or manipulation of components through many different orientations.

A robot cannot be designed for the worst-case scenario, as it simply would not be price competitive. It is therefore necessary to instead determine which factors reduce the performance and operational life of the robot to identify which ones are under the most stress.

Measuring wear and tear
Some of the key parts of a robot are the gear boxes that play a major role in the movement of the various axes. There are several issues that can reduce the life span of a compact gearbox, one of them being the duty factor. This is a very important measure, as it reflects the overall activity of the robot. The robot’s duty factor is calculated as the time that at least one axis is moving divided by the total production time. There is also an axis duty factor, which is calculated in the same way but on an axis-by-axis basis.

Previously, it has been difficult for users to determine whether key parts such as gearboxes are becoming worn or in need of replacement. The result has been that problems go unnoticed until the robot fails or the company carries unnecessary stocks of parts or is unable to source the right parts when they are needed. This leads to disrupted production while the robot is offline.

A data-based approach to maintenance
This challenge is met through condition monitoring, a process which constantly gathers data on the operation and performance of a device to assess its maintenance needs.

Designed for customers with large fleets of robots, ABB has launched a new Condition-Based Maintenance service, enabling the creation of a customised preventive maintenance schedule. This can be for either individual robots or fleets of robots, as used in a car plant. Based on real-time operational data, it allows automotive robot users to optimise productivity and minimise downtime.

Condition-based maintenance involves gathering motion data on the operation of each robot to help identify any potential issues that could affect performance. These include duty factor, speed, torque, and gearbox wear. The data doesn’t exist in isolation – instead it is compared against a 14-year old database of other ABB robots across the globe to calculate when or if a particular robot is likely to develop a potential fault or failure. Monitoring also minimises the likelihood of premature failure and extends the Mean Time Between Failure rate, as well as prolonging the operational life of the robot.

Insights maximise performance
Based on this information, robot users gain the insights they need to create a preventive maintenance schedule to help keep robots in good working order and to help maximise performance. The service can advise whether any remedial action is required, either a repair or a replacement of any affected parts.

This allows spare parts to be purchased at the right time, ensuring they are available but not taking up capital and space by being held in stock for extended periods. As well as better budget management, this ensures the car plant has the correct resources on hand and can plan in advance when the repair needs to be performed, reducing the risk of unplanned downtime.

Deciding on exactly which preventive measures to take is achieved through a report provided for each robot. This includes a colour-coded summary table that clearly indicates the status of each axis and the overall health of the robot indicated by the calculated joint usage score. Also included is data analysis, individual maintenance recommendations, conclusions, and rating of the system. 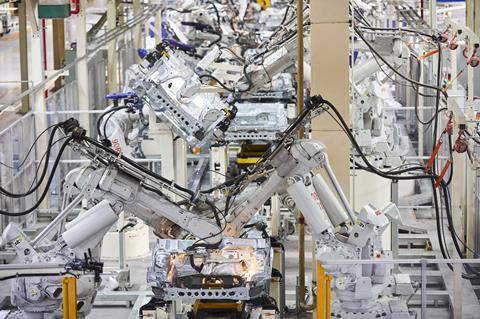 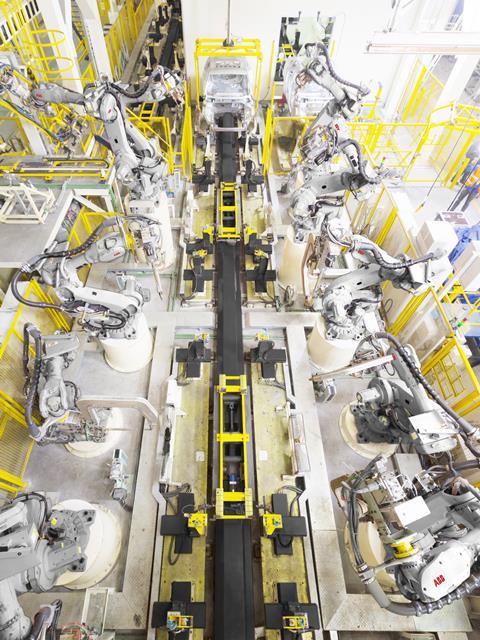 A detailed report is taken for each robot to decide on preventive measures. The data can be delivered as a plug-in into ABB’s programming tool RobotStudio

Two levels of analysis are provided. Level 1 gives a factual overview of the customer’s installed base and identifies the most stressed robots in the plant. This gives the customer a detailed overview of how robots are used in their plant.

The Level 2 analysis further investigates the robots selected at Level 1, giving the customer a detailed knowledge of their most “stressed” robots. This prevents the risk of unexpected gearbox breakdown in production and gives recommendations of how to deal with these “stressed” robots. Using this data, the customer can then design an appropriate maintenance schedule, with the assistance of ABB if required.

The Level 2 report also helps to define the budget for spare parts and supports the plant’s strategy to upgrade its robot fleet.

Keeping on the road to improvement
With drivers demanding ever more bespoke models and options, ensuring that robots continue to work for the maximum amount of time is key to maintaining the extreme flexibility of the modern car plant – condition-based maintenance is a vital tool in ensuring that car manufacturers stay competitive in a rapidly changing industry.