Technology for the digital age

One such company is Bentley. At the company’s plant in Crewe, UK, the luxury carmaker is using Dassault Systèmes’ PLM solutions, including CATIA, ENOVIA, DELMIA and 3DVIA, to exploit 3D visualisation and simulation techniques across core product lifecycle processes for the recently-launched Mulsanne.

It takes nine weeks to build a Mulsanne, over which time around 10,500 parts are brought together and assembled. Ian Swann, Senior Virtual Assurance Engineer at Bentley describes how 3D technology was used to develop the new model.

“We used Dassault Systèmes’ manufacturing simulation tools to model 831 build operations across 30 stations – the complete build process was simulated in 3D,” he says. “Using this data, a detailed assessment of the build process was carried out and any potential build concerns were identified and resolved much earlier in the design process.”

This methodology, facilitated with Dassault Systèmes DELMIA, included 3D reviews at regular ‘virtual build’ meetings where 3D visualisation allowed production build associates to make valuable contributions to the design process and influence the design based on their experience and specialist knowledge.

“The foundation stone for being able to exploit these technologies revolves around our ability to manage all of our information in a single database,” he continues. “All data is managed in ENOVIA and all departments access this data concurrently. The same data is presented in DELMIA, where manufacturing associates can plan and simulate manufacturing processes in parallel with design evolution.”

The methodology at Bentley is a good example of PLM in action, where digital technology exploitation now encompasses a complete virtual build. With regards to doors, 204 parts must be efficiently assembled into each aluminium-skinned door assembly. DELMIA was used to define an optimised assembly sequence, which was shared with other departments, including production associates, whose input was valuable in developing a final design optimised for both function and production.

Dassault Systèmes has also signed a five-year global agreement with BMW that will not only improve its automotive product offering but also the BMW development and production process. Dassault Systèmes’ software solutions support BMW in core areas for design and manufacturing process planning, with CATIA as the backbone for product development.

Core products in the suite include AutoCAD Architecture, Autodesk Inventor, Autodesk Navisworks and Autodesk Vault software. In addition, the new Autodesk Factory Design Utilities offers a factory-specific work environment that helps factory designers spend more time innovating instead of drafting. It allows users to try different ‘whatif ’ scenarios by dropping 3D factory models on top of a 2D floor plan. The suite includes a library of parametric, factory-specific content including conveyors, material handling equipment, safety fences and other objects, and it is easy to import factory assets from suppliers to include in the layout.

Leyland Trucks, part of the PACCAR Group, has direct experience of digital manufacturing; one of its recentlyintroduced production lines was designed entirely with the use of advanced simulation and virtual reality.

“We were using PTC’s Pro/ENGINEER, but we needed to do more than just model – we wanted to see a whole vehicle on the screen, and be able to move around it to discuss particular design issues as we would have done using the traditional physical mock-up approach,” says Ian Cure, Leyland’s CAD System Manager. In order to deliver this, Leyland Trucks approached Virtalis.

Previously, like most in the industry, the design team at Leyland built physical truck mock-ups to ensure parts fitted together as intended by the designers and to be certain there were requisite clearances during the manufacturing process. Doug Holmes, Lead Engineer of Leyland’s Configuration Group, says: “Even though we employed a full-time engineer to keep the physical model up-to-date, there was necessarily a lag between when the changes were made and when we could see the implications of those changes.”

Providing customers with bespoke trucks has led to Leyland having a very complex bill of materials. This is because the number of possible truck permutations is almost limitless. Trucks are tailored for different operating conditions, where a seven-tonne vehicle, for example, can have a choice of six different wheelbases, two different engines, four different gearboxes and 300 rear axle ratios.

Using VR to link Leyland’s designers with its manufacturing engineers has helped to cut both design rework and time-tomarket. “With Virtalis’ help, we were able to build the entire manufacturing process stage by stage,” says Holmes. “They installed a passive stereo system, which allowed us to carry out weekly design reviews with our manufacturing colleagues.”

Two days before the new truck variants were scheduled to go down the production line, workers from the shop floor were shown the model and taken through the 40-stage manufacturing process. This familiarised them with the new parts and their new roles in a single session. 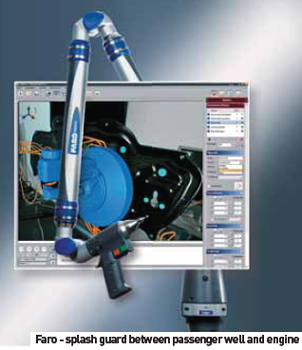 Of course, digital manufacturing is not restricted to designing entire production lines. Individual product areas and processes can also benefit from this innovative technology.

Vehicle interiors are one example. Unfortunately, most automakers and their suppliers are still using outmoded methodologies for developing seat trim covers, engaging in a slow and costly process that results in missed business opportunities and strained customer relations. Vistagy’s Seat Design Environment (SDE) addresses these issues by providing an accurate 3D master model of the trim cover from the earliest stages of design, all the way to manufacturing, by enabling seat cover manufacturers to bring flat patterns that have been altered with 2D editing software back into the 3D CAD model. This master model definition can be used to automatically update engineering and manufacturing data to create a faster, more precise process for delivering seat covers to market.

The latest version of SDE enhances the master model concept by providing an environment integrated into commercial CAD systems where geometric and nongeometric information can be captured within a single 3D CAD model throughout the entire design process.

Majenta Solutions, a product development, manufacturing and product lifecycle management software solutions provider, has been awarded a contract by automation control systems developer Autotech for the supply and implementation of a number of licences of Tecnomatix Robcad robot simulation software.

The software, which enables the design, simulation, optimisation, analysis and offline programming of multi-device robotic and automated manufacturing processes, has been purchased by Autotech in a strategic move to develop its business for the future. The fi rst projects for which the Tecnomatix Robcad software will be used are Autotech’s control solutions for Jaguar Land Rover (JLR) Tier One suppliers FFT EDAG, ABB and Laepple. These projects comprise the development and implementation of the automated body-sides production lines and framing station for JLR’s new small Land Rover at Halewood, UK and the door production cells for the new Jaguar XJ at Castle Bromwich, UK.

“With the Tecnomatix Robcad software we are able to simulate and prove fully the functionality of robot cells before they are installed on the customer’s shopfloor,” explains Mark Demer, Simulation Manager at Autotech. “This reduces commissioning time, because there are far fewer issues to deal with during installation. It also gives our PLC and robot programmers access to the virtual cells prior to installation, helping to ensure the generation of right-first-time control software.”

Engineering as well as manufacturing drawings can now be created with SDE 2009. This includes the ability to show and hide cut-outs on sewing reports and engineering drawings, as well as the ability to highlight colours on sewing reports to show seam type in isometric and flat pattern views. This improves the communication of the designer’s intent to the design and manufacturing teams, speeding overall development time and increasing accuracy.

This capability has, among others, attracted the attention of General Motors, which has purchased Vistagy SDE for use in its engineering operations. GM anticipates that SDE will enable it to reduce seat trim development time and obtain cost feedback earlier in the design process. SDE complements GM’s single CAD system strategy because it integrates with the company’s CAD system of choice, Siemens NX.

“SDE is a very intuitive product to use,” says Hartwig Gaertner, Bill of Materials (Trim Covers) at GM. “Our trim engineers, who had little exposure to the CAD system, were up and running on SDE in a few days. Within two to three weeks they were able to create the seat cover flat patterns and the design and manufacturing data needed for cutting and sewing driver, passenger and back row seats.”

Another solution for seats is Design Concept 3D from Lectra, a CAD development suite that allows designers to work directly on 3D models to define the styling (sewing) lines of a seat cover or component to achieve the desired aesthetic look. Based on the boundaries created by the designers, the program can create the 2D flat patterns that are needed for cutting the patterns out of fabric or leather, and simultaneously provide an analysis of manufacturing feasibility based on the desired material properties. The program achieves this by using properties provided on each material to give the operator feedback on the strain and compression on the fabric in various axes.

Using Design Concept 3D, designers are able to create first patterns that are up to 95% accurate for production, and that require minimal fine tuning. The developed patterns can be used to provide an initial material consumption cost based on a nesting algorithm that simulates how patterns will be cut in true production, far beyond a rough estimate based on piece square area and some percentage that is randomly chosen based on past cases.

For many applications, a big component of digital manufacturing is 3D laser scanning, a technique used to collect data on component shape and appearance which can be used to construct digital 3D models useful for design, reverse engineering, prototyping and quality control.

Prominent technology suppliers in this area include Faro, which with its Unifeye product offers an augmented reality application for digital manufacturing. The system consists of a PC with software developed by Metaio, which makes it possible to overlay virtual geometries (CAD models) in camera images. In order to guarantee exact visualisation, the camera and lens are optically calibrated. A FaroArm on to which the camera is mounted is used to determine the position of the camera in the room. Through the alignment of the arm to the prototype and the known position of the camera on the arm, it is possible to achieve highly accurate overlaying for the visualisation.

The benefits include the potential to visualise different drivetrains and components, quick visual co-ordination of revision levels from subcontractor parts, and the testing of identical parts with regard to the ability to use them in different vehicles.

One obstacle to successful scanning/digitising processes has been highly reflective surfaces. However, the ModelMaker MMDx series with digital ESP3 technology from Nikon Metrology claims to have overcome this barrier, scanning nearly all materials and surface finishes by automatically using optimum laser stripe settings. Through ESP3 technology, MMDx digitises surfaces with varying colour or abrupt surface finish transitions under any lighting conditions by adapting laser beam intensity on a point-topoint basis.