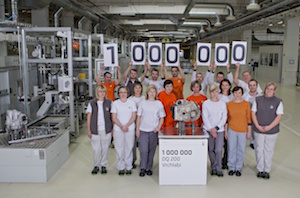 Czech Republic – Production began in September 2012 and during this year the plant will reach a daily capacity of 2,000 units. The half-million mark was reached in October 2014.

“In preparing for DQ 200 production, Skoda and the Volkswagen Group invested a total of €245m [$270.1m] into reconstructing the production halls, acquiring technical equipment, building the Training Centre for gear production, and logistics,” said Frank Engel, head of Skoda Component Manufacturing. “In recent years, the Vrchlabí plant has evolved into a high-tech location.”

Vrchlabí was converted from vehicle to component production in 2012 after an 18-month modernisation programme. It now employs 1,000 personnel.

In addition to DQ 200 production at Vrchlabí, Skoda makes the MQ 200 and MQ/SQ 100 transmissions at its main factory of Mladá Boleslav, which employs 700 people. So far, over 6m of the MQ200 and 1m of the MQ 100 have been made for installation in Skoda and other Volkswagen Group vehicles.

The dual-clutch DQ 200 is also used for a variety of brands and has been described by Michael Oeljeklaus, Skoda board member for Production as being “of great strategic significance to the entire Volkswagen Group”.