Building on its core competence in automotive plant engineering, AES has set up overseas bases in Thailand, China, India and America to provide specialised engineering services to leading carmakers. In 1992, the company adopted DELMIA D5 IGRIP (then known as Deneb/IGRIP) to conduct industrial robot simulations. Katsuharu Tanaka, Manager of the company’s Digital Engineering Office, was among the earliest users of Deneb/IGRIP in Japan.

AES has been using CATIA and DELMIA extensively in its entire process flow, from factory planning to production ramp-up. For stamping and body-in-white processes, AES has used DELMIA software for everything from manufacturability and feasibility tests to simultaneous engineering and basic and detailed design tasks, including robot applicability simulations. 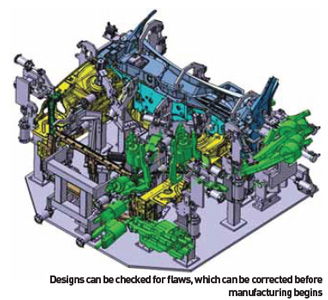 “In a recent project for a Chinese carmaker, AES strived to practice simultaneous engineering,” says Tanaka. “The conceptual designs developed by AES were compared with the client’s 3D models, allowing some 80 to 100 design flaws to be identified within just two months. These flaws were then fed back to the designers so that they could make further refinements before the prototype was manufactured.”

In simulations designed to examine the applicability of robots to specific processes, AES directly imports 3D models created with CATIA into DELMIA Robotics, evaluating possible spot welding sequences to help in the planning of the welding processes. When adapting an existing production line to new car models, these software tools are also employed to check whether the existing robots and welding guns are applicable to the new process.

To assure greater precision of the robots’ movements, it is critical to understand exactly how they move, in order to optimise the designed jig. Conducting simulations while designing jigs with CATIA allows any errors to be identified and corrected at the same time. “That is the single most significant advantage of using DELMIA and CATIA together, and no competing products can emulate them,” says Masahiko Nakazono, Deputy Manager of the AES Digital Engineering Office.

AES also carries out offline programming of robot paths using personal computers. Critical in this process are the actual measurements of the shop floor, including, for example, the relative positions of equipment and the shapes and sizes of obstacles. For offline programming tasks, AES uses robotics and 3D laser scanning technology to create a digital model that is tightly correlated with the actual shop floor. When the process design is evaluated and optimised through these simulations, the results are converted into machine control programs and downloaded to each piece of equipment.

“I suspect few companies go the extra mile to create virtual models that mirror the actual objects as closely as ours,” says Tanaka.

AES has been able to significantly reduce the time and number of steps required for importing 3D models. This is the key reason AES decided to switch to DELMIA.

While DELMIA IGRIP required all facility and work cell models to be built with IGRIP, DELMIA Robotics allows 3D models generated with CATIA and other CAD tools to be imported. Model designers can then simply rearrange the imported models and add welding guns and other equipment as needed. This means that the modelling process can now be divided into smaller tasks and outsourced to partner firms. As a result, the total number of steps required to develop simulations has been reduced, along with time to production.

Furthermore, the accuracy of the checks and evaluations performed during the early planning stage and after the completion of jig designs has improved significantly.

“The intricate timing for lock-and-release among multiple robots is made clearly visible, and it takes only a short while to check and verify the timing, even when a large number of robots are involved,” says Nakazono.

In the run-up to the start of production, the time it takes to create design data and build production facilities has shrunk dramatically. “Compared with five years ago, the speed at which we can complete facility engineering and design has increased by a factor of at least five,” Tanaka says.

“This is partly due to the improved skills of our engineers, but the efficiency and productivity gains that the CATIA and DELMIA tools have given us are equally important.” Regarding the effects of CATIA and DELMIA on the quality of engineering services at AES, Nakazono says: “Mechanical engineers picture 3D images in their heads, but conventionally these had to be rendered in 2D as drawings on paper and on 2D CAD systems. With CATIA and DELMIA, the images can be directly visualised in 3D, which facilitates design and engineering communications and vastly improves the quality of engineering.”

Prospects for the future 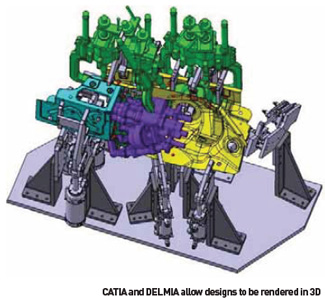 To reinforce its digital engineering capabilities, AES is now contemplating the adoption of DELMIA Human. This will help AES build virtual factory models that reflect work conditions more accurately than ever before, right down to the number of workers, their movements and even their work efficiency. This ergonomic modelling solution will be invaluable in designing streamlined production lines.

Pursuing a global business strategy, AES recently entered into an alliance with AAPICO, a Thai manufacturer of auto parts and jigs, and formed a consortium with other partners, known as SAMA, to initiate new services encompassing production engineering and parts delivery.

Taking full advantage of its freedom from ties with specific automotive groups, AES expects to continue to enhance its engineering skills and expertise with CATIA and DELMIA to remain a successful global player.