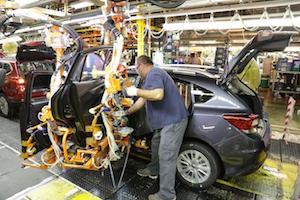 US – The start of production at Subaru of Indiana Automotive (SIA) marks the first time the Impreza has been made in the country; until now, the model has been produced exclusively in Japan. The plant has spent three years preparing for this launch, after $1.3 billion was earmarked for the project four years ago.

The introduction of the Impreza involved an increase in capacity, with the enlargement of engine assembly, trim and final assembly, and stamping, plus the construction of a new paintshop. The workforce was also expanded to 1,400 individuals. Output at SIA will now exceed 380,000 vehicles per year, adding to the nearly 5m vehicles produced since 1989.

SIA’s parent company, Fuji Heavy Industries, decided to move production of the Impreza to the US to meet growing demand in the country, following eight consecutive years of sales increases. Based on the Subaru Global Platform, the new Impreza will be available in sedan and five-door versions, with Premium, Sport and Limited trim lines.

“In a time when some manufacturers are moving work out of the United States, we’re proud to be bringing Subaru Impreza production to the heartland of America,” said Tom Easterday, senior executive vice-president at SIA. “The move has allowed us to create hundreds of new jobs not only at SIA, but also at our suppliers in Indiana and across the country.”