Russia’s automotive industry has seen something of a renaissance since its Soviet guise was consigned to history. GAZ, famous for its trucks and Volga and Chaika cars, is re-establishing itself as a car maker through contract manufacturing with VW, GM and Daimler, as well as continuing to develop its successful LCV range both with the GAZ brands.

So, how do you turn a monolithic, vertically integrated, soviet-era carmaker into a lean, competitive manufacturer? 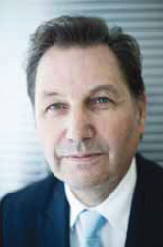 time to show AMS around the Nizhny Novgorod plant and explain his vision for the future development of GAZ.
AMS: Where do you see the main competition for domestic market share coming from?
Bo Andersson (BA): The main competition in bus and LCV is from imported used vehicles from China and Europe. It’s just the low price
point for utility vehicles which appeals to Russian customers.
AMS: Where do you think GAZ can make the most progress in its production processes?
BA: We have already made and continue to make improvements across the whole production process. Areas where we are targeting further progress include quality and reducing the fault rate per vehicle.
We want to modernise our internal logistics, as at present it isn’t as efficient as it could be. Having more of our outside component suppliers on site will also help with the production flow. Also we need to continue with developing our vehicle range.
AMS: Where do you see future investment being made at Nizhny Novgorod?
BA: We plan to invest $0.5 billion over the next two years in key projects, including
development and production of the new GAZelle Next model, continued expansion of our contract manufacturing partnerships
with VW, Mercedes and GM, with the associated development of the production facilities, which will include a new bodyshop and paintshop.
We will also consider growing the number of contract manufacturing partners.
AMS: How do you see the GAZ brand developing?
BA: We will continue to build on the brand’s strength and leadership in the key segments of LCV, LDT, buses and AWD trucks.

Well, there is a saying that ‘if you can’t beat them join them’ and that’s what has happened to some extent. As with many of the formerly state-owned-and-run operations in Russia, GAZ went through the tumultuous process of becoming a privately owned and operated company in 1992, and is now part of Oleg Deripaska’s Basic Element Group. In 2009, former General Motors vice-president Bo Andersson was appointed as president/CEO of the GAZ Group. Andersson immediately began to institute major changes to both the manufacturing organisation and the product range.

Restructuring for the future
The Gorky Automobile Plant in Nizhny Novgorod, now the headquarters of the GAZ Group, was established as a state-owned enterprise in 1932. At that point the facility encompassed all aspects of vehicle production, including having its own foundry. This model of vertical integration, especially when developed in a ‘competitionfree’ environment, became cumbersome and not costeffective. To ensure the Nizhny Novgorod plant’s viability and the GAZ brand’s economic future, a huge amount of restructuring has been done, which has also unfortunately seen a big reduction in the workforce. This, along with the economic collapse in 2008 has also resulted in the end of GAZ-branded passenger car production. The last passenger car model to be produced at the plant was the Volga Siber; based on the Chrysler Sebring/Dodge Stratus, but modified to suit the Russian market. GAZ had purchased the complete assembly line and tooling for this model from DaimlerChrysler when the US carmaker was updating its Sterling Heights assembly plant in 2006. However, the Siber wasn’t a commercial success – described by Andersson as: “The wrong car, at the wrong price, at the wrong time.” With the economic downturn in 2008, the production run was cut short and the existing stock sold off.

Commercial success
While the Volga brand may have lost its appeal to the new Russian buyers, the company’s LCV, bus and truck models continue to sell well, especially the GAZelle and Sobol ranges of light commercial vehicles. With a huge number of variants (over 300 modifications ranging from minibuses and ambulances to mobile forensic laboratories) this division accounts for 40% of the Group’s total sales revenues. The company says the GAZelle is the most popular LCV in Russia with 50% of the market share in its class. Much of its appeal lies in the versatility of the range coupled with a simple, robust design for ease of maintenance and low running costs.

The commercial vehicle production hall at Nizhny Novgorod covers 70,000 sqm and currently operates three lines with 677 workstations for 1,035 staff divided into 80 separate teams. Although the buildings may date from the soviet era, the production processes in place demonstrate the company’s drive towards lean, efficient manufacturing. Unlike its original incarnation, Andersson is determinedly reshaping GAZ into an economically competitive business. To this end he has instigated a ‘built-to-order’ production programme which avoids over production and amassing a large unpaid-for inventory. The light commercial vehicle division, with its impressive domestic market share, sees enough demand to sustain this. It also acts as an additional incentive to the production workers, who know the vehicle they are assembling is bought and paid for, and therefore must be completed on time and to a high standard. The development of the production process is a work in progress. Currently about 50% of the components are delivered to the commercial line on a ‘just-in-time’ basis, but the goal to is increase this by introducing a ‘kanban’ system based on the TPS model.

Sourcing of components has also changed, with parts like clutches, braking systems and prop shafts now being brought in from outside suppliers. These – and indeed all components – were originally produced on site or at another state-owned facility; the epitome of ‘in-house’ production. However, as Andersson explains, quality issues raised by customers had helped direct the need to source better quality, more cost-effective components from outside suppliers. This is another example of how the hegemony of vertical integration has been broken. Interestingly, there are some unexpected areas were ‘in-house’ production is still employed and, indeed, is advantageous. For example, the seats for the GAZelle and Sobol models are assembled on the line-side; this is apparently more cost-effective than outsourcing due to favourable labour rates and low-tech requirements. The quality is also said to be better. It’s in these areas where the company’s past can be glimpsed and is being profitably utilised.

In-house component production
Some of the previous in-house component infrastructure still exists but this has been subdivided into separate businesses; in some cases with a joint venture partner. The stamping shop not only produces body panels and stamped components, it also creates the dies for the presses (producing 700 dies per year) and moulds for interior and exterior plastic parts. It boasts 15 test presses, hydroforming presses, spark erosion equipment and CNC machines.

The hydroforming press offers high quality results with lower costs in terms of tooling as it uses a one-sided die with fluid pressure providing the forming pressure. As with the rest of the plant this represents idea of the ‘Dearborn’ model of in-house production. Adjacent to the press shop is TRM, a joint venture between Russian Machines and the Japanese company TRAD, producing radiators. This is another plant which has been re-utilised with the assembly hall being refurbished and new equipment installed. TRAD currently produces 100,000 units per year with GAZ being the main customer. The hall is divided between component production, with AIDA presses for the core plates, and an assembly and testing area. Again a just-in-time production philosophy has been implemented to streamline manufacturing and avoid high levels of inventory.