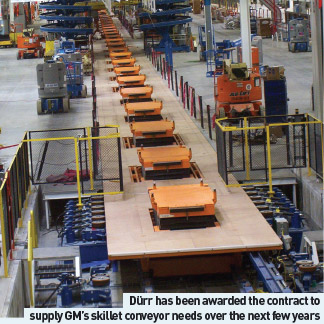 The move has saved the automaker between 35 and 45 per cent in module, integration, and installation costs.

In addition, engineering time for setting up new conveyor lines has gone from weeks to days; sometimes even hours.

At the same time, they’ve really shaken up the vendor world, with their insistence on changing conveyors from a system to a commodity.

“This is something that from the conveyor perspective has become a real game changer,” says Bob Amans, Director of GM’s CCRW Conveyors. “We got all the conveyor manufacturers, the support engineering houses like Giffels, brought them into the office and discussed that things had to change.”

With most factory equipment, much of the integration work is done offsite. Equipment is built up in a vendor’s factory, tested out, debugged, they move it to the auto plant, put it back together and it runs.

“You couldn’t do that with a conveyor because it wasn’t a commodity but a system,” says Amans.

“Our whole drive was to turn the conveyor business from a system supplier to a commodity supplier. And in doing so, you always ensure that the commodity will work out of the box; that was the goal.”

CCRW used a ‘threelegged stool’ type of approach in its quest to standardise conveyors: modules, engineering, and installation. They buy the actual conveyor modules from one company for use in GM plants around the world. No matter if the plant is in China, Germany, Mexico, or the US, CCRW is buying a commodity product from the same company at the same price. Successful vendors are given a three-year contract that can be extended to five if both parties agree.

GM buys the engineering on a regional basis, with regional meaning an entire continent in the case of Europe, or a single state or province in the case of the US and Canada. “We use European engineers to do the integration work for European plants because they understand the laws, rules and regulations,” he says.

For the third leg – the installation work – they buy services locally, for much the same reason as the regional engineering procurement. “If you’re doing business in Oshawa, Ontario, it’s different than doing business in Lansing, Michigan, because there are local issues concerning skilled trades and municipal codes.” 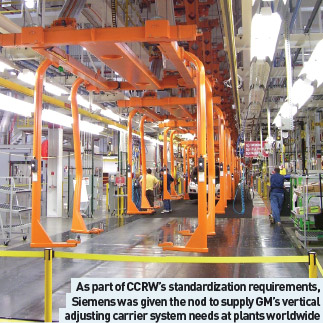 Rewards out of the box

AFT’s skid conveyor is currently being used globally in a number of GM facilities from Lansing, Michigan and Zaragoza, Spain to a GM facility in Egypt.

“In Zaragoza we use it in the paint shop, in Lansing we use it in the body shop,” says Amans. And it didn’t take long for going “out of the box” to prove its worth. “We had an issue arise in Zaragoza soon after installation. All the engineers that developed the product happened to be here in Michigan. We got a call from Spain describing the problem and there were two things: one, we suspected that it wasn’t a product problem because we’d never experienced that in Lansing and there was far more product in Lansing. And two, we went to Lansing to see if we could recreate the problem. We did so, figured out what the issue was, instituted the correction in Lansing and sent the fix to Zaragoza for them to implement; it’s a lot cheaper that way.”

“It’s important to note that these were all issues found prior to startup,” says Amans. “And they were conveyor issues that – in a non-standard environment – probably would not have shown up until six months into production.

At that time, contractors are no longer on site and it becomes a warranty issue, and a downtime issue. We were able to avert big-time problems because we could go to other locales, with the same conveyor setup, to recreate the problem.”

CCRW is seeing great improvement in the throughput of its conveyors. “Because the product is a known product, 3D graphic work is a no-brainer now,” says Amans.

Previously, all of the 3D graphics work in designing a new line was essentially one-of-a-kind; the company never bought the same conveyor twice. With standard, conveyors are always exactly the same, “so all the modules are already created in 3D. Therefore, when I do a new factory it takes me hours instead of weeks to do all the layout work in 3D.

“We also do emulation: the high-powered version of simulation. Simulation is a mathematical representation of flow. Emulation is a mathematical representation of the magnetics and the software of the conveyor itself,” he says. “Simulation tells you whether or not you get throughput, emulation tells you whether or not your mechanical and software controls actually work. You’re running a conveyor via a computer simulation with the actual software and hardware in the background doing the computing. You can determine if your software works prior to going to the plant floor and installing it. That alone has allowed us at Lansing, for example, to send a contractor home three months early. We found over 400 problems in the lab. Without a common, consistent product, none of those tools are effective. To do proper emulation without it, it would take two or three people four months to give you an answer. Now they can do it in a couple of weeks.

“I’ve gone from emulating one conveyor per factory to emulating the entire factory, before I ever install the conveyors.”

Amans reports the biggest problems to date have been with lower tier suppliers. Due to the volume demands of GM buying conveyors in bulk, and the fact that CCRW insists on consistency right down to the bearing, second, third and fourth tier suppliers have had major difficulties keeping pace.

“In the conveyor world we’re saying that a bearing is not a bearing,” says Amans. “If we insist on a specific bearing, that’s the bearing you have to use. Then we found out that that bearing supplier couldn’t supply all the bearings we required. There are many suppliers that supply a comparable bearing, but we want the specific one. We had problems getting bearings, plugs, cables, plastic pieces – you name it.

When it came down to those lower tier suppliers, we actually had to work with some of them to build new factories.” When CCRW first began floating the idea of common conveyors for its factories, apparently none of the vendors and their suppliers believed it would work, so no one tooled up for it.

When it became clear that GM was adamant this was its strategy, the vendors took notice and made changes. “It’s better now, but still not perfect,” he says. “It was eye opening.

It wasn’t the conveyor that was the problem. It was the little things, the little plastic part. And it wasn’t so much the part, but the fact that they couldn’t get the plastic. We had to really go into the supply chain to solve the problem. I have a whole team of people who do only that.”

Other than that, CCRW has had minimal issues with the vendors themselves. “Like all engineers they all want to go common, as long as it’s their version,” says Amans, jokingly.

“We had some issues there globally, but we’ve negotiated our way through. We’re a little bit ahead of the rest of the workforce. We’re out there in front and the wave is hitting us – we don’t have a lot of support because we’re a little too far out from our interference. The good thing is, because we’re out front, the solutions are ours – not from somewhere else.”

Amans feels the process of turning systems into commodities – the “bundling process” – is going to expand in future, especially as GM’s competitors follow suit. “I know from my discussions with our conveyor suppliers that our competition is keenly aware of what we’re doing and they’re starting to use the same methodology that we use,” he says.

From a vendor perspective, where once the conveyor suppliers had to be led kicking and screaming to GM’s way of thinking, now they’re realising the benefits, which far outweigh the negatives according to Amans: “In reality in the conveyor world, when you look at the three legs of the stool – modules, engineering and installation – none of them were leaders, best of the best, in all three legs,” he says. “Certainly, quite a few of them were leaders in one or two of the legs, but now going common allows them to concentrate on what they do best.”