Robots flex their muscles to multi-task

Robots have traditionally been a single-task tool; in the earliest days of robot usage, engineers designed tasks and tooling for one robot carrying out one operation, be it welding, heavy (and light) lifting, machine tool changing, etc. Empowered by increasingly sophisticated control systems, time and motion studies of robot ultilisation have now led manufacturing planners to adopt a different view.

Robot makers have risen to these challenges. Highly adaptable robots with multi-tool, rapid-change ‘heads’ have enabled line designers to use one machine to carry out several tasks. This usage pattern has also been influenced by the need to maximise production cell productivity in order to get the greatest number of operations in the smallest space. No longer can plants in established car making countries simply decide to expand footprint size. The demand for flexibility, be it in multi-model and platform lines or rapid ramp-up of new models on existing lines, has meant that ‘robot flex’ is the new watchword for the most efficient use of time, space and energy in a plant.

Julian Hetherington, Director, Land & Strategic Asset Development at Jaguar Land Rover is enthusiastic about robot multi-tasking: “We want a robot to have multiple heads or tool carriers and there is no reason why, in a welding station, a robot cannot handle a gripper or vacuum holding tool to place the work into a jig or fixture for welding and then go to a tool store station and select a weld head. While this is taking place, another robot is either adding another piece to the assembly or welding. Then both robots can perform further welds, return to their tool stations and select other tools and so on.”

This multi-tasking can also be timed and ‘choreographed’ to include the human element. Hetherington: “It makes sense to maximize robot usage and, where it is safe, to fit it in with manual handling operations. While the robots are busy with one operation, the operator can be doing another job alongside the robot station. As long as safety procedures are carefully planned and observed, robots and humans can work well together.”

Soft servo robots are used by Jaguar Land Rover for polishing the dash and other interior trim woodwork. 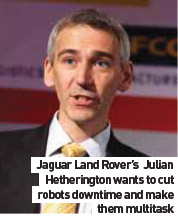 In this application, it is essential for the robot to ‘feel’ the target surface and adjust the pressure of the polishing head, or mop, to produce the required high standard of finish without overheating the surface through excessive pressure.

JLR uses the SoftMove system from ABB, a software option that allows the robot to be compliant (or floating) in order to adjust to external forces or variations in work objects.

This can be used in a typical machine tending application where the machine, e.g. an injection moulding or die-casting machine ejects a part. With SoftMove the robot is compliant in one direction only, which facilitates high accuracy and reliability. The option reduces robot programming time and enables efficient interaction between robot and machine, further reducing cycle time.

The robot can be set to be compliant in one Cartesian direction, either during a programmed movement or while standing still. The robot can either be floating or acting like a spring, which facilitates flexibility and multiple application possibilities. When the robot is in floating mode, it will be ‘free floating’ in the specified direction and the position can be changed by external forces. In spring mode, the robot acts like a spring in the specified direction, the force needed to push it away increasing with the distance from the start point. The compliance shortens programming time and improves productivity and quality during production.

A good example of this kind of flexibility is found at Westfalia-Automotive (WA), the European market leader for spherical-head trailer couplings for cars and lightweight trucks. This 850-person company, located in Rheda-Wiedenbrück, Germany, operates a dozen robotbased production cells with Motoman robots and installations. WA uses 27 six-axis robots which give short cycle times, precision welding for what are safety-critical parts, with short conversion times and high path accuracy. 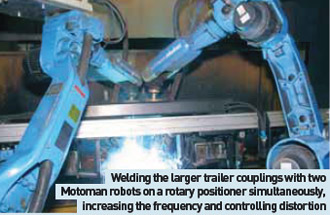 While the designs of the trailer couplings are nearly identical, many different-sized assemblies are made on the same lines. This requires highly ‘intelligent’ controls and software, and for the smaller applications, Motoman-HP20 welding robots are used, with a NX100 controller featuring a Windows CE teach pendant with colour touch screen and a storage capacity of up to 60,000 steps, 10,000 instructions and 10,000 PLC steps. Communication with existing networks is possible with Ethernet, Webserver options and field bus support for the most common brands.

For each trailer coupling variant, the server offers the right control program for downloading. In addition, WA has developed separate welding programs for each coupling variant that are stored on a server. The high operating loads of the couplings – up to 3.5 tonnes – have several consequences. To ensure suffi cient endurance strength, weld seams of very large dimensions are needed. Since the trailer coupling is a safety-relevant component, welding must always be performed in a gravity position and thus the robot moves towards the part from above.

For the larger couplings, WA selected two Motoman UP6 series robots and a NX100 controller. Using the robots simultaneously increases the frequency and thus the throughput of the installation. Another advantage is that thermal distortion can be reduced, as heat input is performed on two sides of the part. The installation features a rotary positioner which allows welding on one side while the operator, who is protected by partition walls, loads and unloads the production cell from the other side. The rotary positioner rotates the trailer coupling in a second axis so that the robot can always weld from above. This allows cycle times similar to those of smaller coupling variants.

In automotive welding applications, whether spot, MIG, TIG or arc, safety and ergonomic concerns have forced carmakers and fabricated part suppliers to phase out manual welding operations as much as possible. The benefits of automated welding reflect in final quality; a manual line cannot be expected to perform the super-quality welds required by high-strength steels and complex fabrications in today’s high structural integrity vehicle frames.

The health hazards and ergonomics of welding high-zinc and other alloy steels are well known. It is just good practice to reduce the man-weld interface as much as possible. Then there is the prospect of being able to simultaneously weld two seams or other joints on the same component, exploiting thermal shift and expansion and contraction cycles to actually increase the strength of an assembly, and the time saving over completing the welds in a manual cycle.