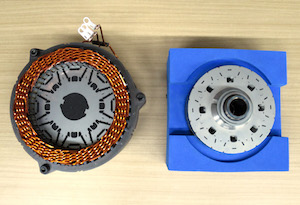 The OEM believes that the new magnet will be "useful in expanding use of motors in various areas such as automobiles and robotics, as well as maintaining a balance between the supply and demand of valuable rare earth resources." Production for the magnets is expected to start soon after 2020, with initial units being used for electric power steering units.

At an event in Tokyo, Akira Kato, General Project Manager at Toyota's Advanced R&D and Engineering Company, told press that reducing the use of these rare earth elements is crucial. “An increase in electric car production will raise the need for motors, which will result in higher demand for neodymium down the line," he said. “If we continue to use neodymium at this pace we’ll eventually experience a supply shortage, so we wanted to come up with technology which would help conserve neodymium stocks.”

With many OEMs expanding their electrified vehicle line up, the demand for rare earth elements could soon rise dramatically. Toyota alone plans to unveil 10 new battery-electric vehicles (BEVs) by 2030, and recently announced that it met a target for 1.5 million electrified vehicle sales three years in advance.