To combat the dread and burden of unplanned stoppages, ABB explores the potential of machine learning, advanced analytics and connected services 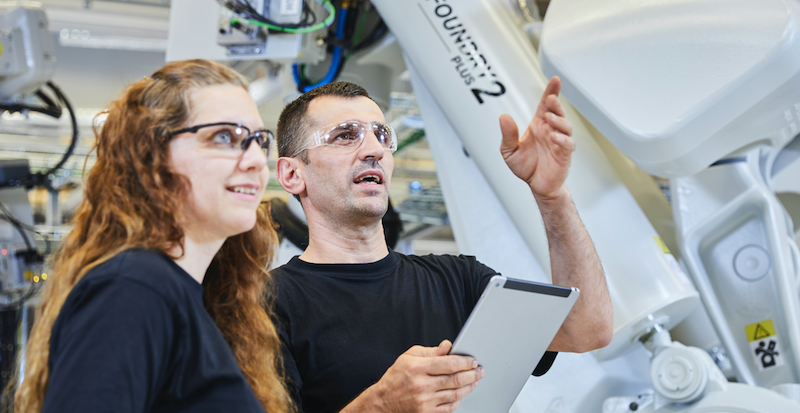 In an average large automotive factory, the cost of unplanned downtime can exceed $1 million an hour. This means in the five minutes it will take to read this story, unplanned downtime could bleed more than $83,330 from your factory. In addition to the high cost of unplanned downtime, many automotive manufacturers shoulder the burden of a high amount of planned downtime to prevent failures. This planned downtime is often scheduled on arbitrary factors such as operating hours or calendar days. While historical performance data can certainly be used to forecast maintenance needs, it can’t take into account the realities of equipment health or provide actionable, predictive intelligence. However simply connecting a device to gather data is no longer a novelty. In fact it is rather expected of everything from our mobile phones to our automobiles to robots on the factory floor.

Going beyond ‘connected’“In the past decades the focus was on connecting robots to gather data, part of the development of ‘The Internet of Things,’ said Jörg Rommelfanger, product manager for ABB Ability Connected Services.

“Now we are moving past that and looking more at how all this data can add measurable value. Today that means condition monitoring and assessing the performance of robot fleets. But with new cloud-based applications that use the power of machine learning to do deep analysis, we are already moving beyond that to predicting performance and asset optimisation.” ABB’s Connected Services for example is piloting a machine learning-based algorithm that can detect and analyse abnormal robot behaviours that could lead to unplanned stoppages. Many robot failures, just like human illnesses, can be prevented with proactive treatment of early symptoms.

Mechanical Condition Change (MCC) is an advanced feature that can detect manipulator problems prior to costly failures related to the inevitable wear on gearboxes and motors. By combining MCC information with information from the robot controller, ABB can provide tailored recommendations and service that optimises total cost of ownership. Such MCCs are reported to ABB service experts, who analyse the data based on ABB’s knowledge base of connected robots in over 750 factories, as well as the customer’s specific historical performance. The result is that gearbox and motor failures can be detected and remedied before they occur and cause an unplanned stoppage.

ABB’s new advanced services are based on actual production from the world’s leading automotive brands, so they reflect the realities of a factory floor. Rommelfanger added “One of the big surprises to come from the analysis of robot behaviour abnormalities was that the greatest inefficiencies were not coming from major failures – they were coming from micro stops. These are small one to five second stops that are often over so fast no one is even aware they are occurring. Identifying and resolving the root causes of micro stops increased productivity for our customer by one full percent, which represents a significant cost savings in a large, established production line.”

What comes after ‘just keep it running’?One of the main advantages of advanced, connected robot analytics is that automakers are now able to look at the fusion of the physical and digital factories for more than just breakdown prevention. ABB’s machine learning-based algorithm can for example identify individual weak performers out of hundreds of robots scattered across many lines and even many plants. This allows automotive OEMs to have a holistic view of how their entire fleet is performing, and to optimise the performance of robots which fall below their benchmarks. It also helps with more intelligent maintenance scheduling for automakers with a global supply chain approach, allowing them efficiently allocate production capacity across many sites while keeping all sites running at maximum uptime.

Big data, not just for the big userSaint-Gobain Sekurit is a leading French glass supplier to many international OEMs, providing windshields, lights and sunroofs. Saint-Gobain Sekurit is monitoring 39 ABB handling, palletising and gluing robots at its Noyon plant through ABB Connected Services. When MCC data led ABB to anticipate a failure in one axis of an IRB 6600 , ABB was able to proactively inform Saint-Gobain Sekurit and explore the situation. This allowed ABB to validate that a motor failure was imminent which could have led to an unplanned stoppage. Breakdowns typically cost Saint-Gobain Sekurit around €4,000 per hour, and it can take a full eight hours to recover from unplanned stoppages. The local ABB service team performed a planned service intervention which was completed in one day to avoid the need of costly downtime.

For some tiers the urgency of an unplanned stoppage is more about meeting business commitments. KOKI is a German maker of precision gear shifters and boxes for some of the world’s leading automakers. These OEMs require just-in-time delivery from KOKI, so any unplanned stoppage could seriously jeopardise commitments. In the past KOKI often had to convert another cell with the same robot model to duplicate the lost production, which was a time-intensive process with risks.

KOKI decided to add Connected Services to its fleet of 60 robots at its Glauchau, Germany production site. ABB Connected Services detected conditions which could have led to a shutdown of one of KOKI’s welding robots. ABB was able to proactively alert KOKI, and also gave its operators actionable data through MyRobot, ABB’s intuitive web-based application. Another benefit of Connected services is that it can give service experts snapshots of the system at the point of failure, so repairs can be more efficient and recover faster. The live data also allows ad hoc repair tasks to be planned quickly and service activities prioritised in order to keep the most important processes running smooth.

Many are discovering the potential of advanced analytics to reduce total lifetime costs while boosting uptime and performance.

Machine learning is a subset of artificial intelligence (AI) where computers can ‘learn’ in certain ways without explicit programming – for example to make increasingly accurate data-driven predictions about robot performance and health through either real life or model-based inputs.

AI is starting to play an increasing role in industry, however its full potential is still in a very early state. Robots and vision systems can combine with AI / machine learning to improve a number of tasks. One early application is bin-picking, where vision-equipped robots can find the correct path and gripper position to successfully pick up random parts in the unstructured chaos of a shipping bin. This removes the extra step of orienting the objects in a uniform way so the robot can ‘find’ them, and it removes the need for a person to handle heavy or sharp parts.

In the future AI will enable more complex tasks, such as allowing AGVs to navigate the dynamic spaces of a factory while avoiding collisions with people or obstacles, such as if a worker leaves a skid of parts in an AGV’s path. This will allow islands of automation that help automakers mass customise vehicles with greater flexibility than traditional, fixed assembly lines. Although robots will become more flexible, it is clear that they will also continue operating within strict parameters to ensure safety and process quality.