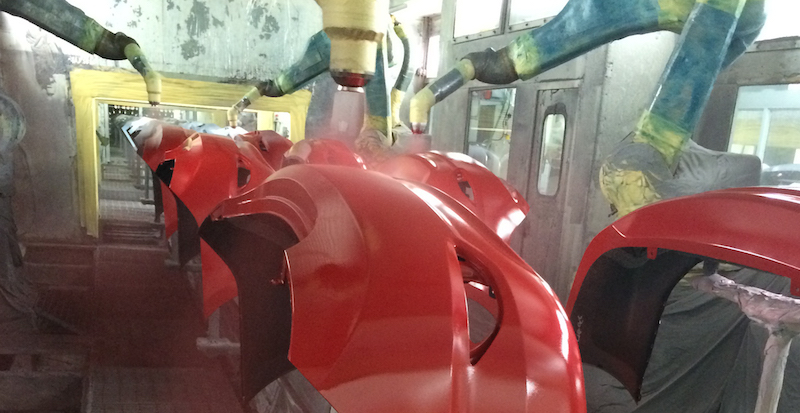 In South Korea, 370km south-east of Seoul, the coastal city of Gyeong-ju is located among widespread low mountains at the East Sea of Korea.

Commonly referred to as “the museum without walls,” the city has become one of the country’s major tourist destinations. While tourism remains the dominant source of income in the region, the growing automotive supplier industry plays an ever-increasing role, now accounting for close to one third of the city’s businesses.

The company’s relationship with ABB harks back to 1993 when Ecoplastic purchased 20 ABB robots for bumper painting. Since then ABB has been a regular supplier of consumables, new innovative technologies and state-of-the-art products for the company, including four IRB 580 robots for flaming plasma used in pre-treatment of bumper surfaces. Since 2010, ABB has also installed 16 atomiser minibel-021 sets for base- and clear paint coating, with the most recent four sets installed in March 2015.

To avoid impacting production, the South Korean ABB Robotics service team installed the four atomisers over the course of four Sundays, which are normally reserved for cleaning and maintenance.

The new atomiser from ABB will pay dividends in reduced cleaning and maintenance time as well as annual operating cost
Additional preparations prior to installation included optimising the atomiser size to avoid having to modify robot programming, checking the Tool Centre Point (TCP) and Shape of Paint Volume, designing the body shape and assembling the atomiser minibel-021 and, finally, checking the feedback rotation signal and shape air input.

“Contributing factors to why ABB was awarded the contract was our wide atomiser product line plus our extensive know-how in the area of plastic painting,” says Young-Woo Lee, project manager, ABB South Korea.

“Faced with existing atomisers close to the very end of their lifecycle, time was of the essence,” says Heung-Jae Lee, painting maintenance team manager, Ecoplastic.

“While we are not using high-voltage in painting, the additional challenge was to identify the best atomiser that could meet our stringent needs. ABB’s atomiser minibell offered the perfect solution and more in pricing, fast installation, durability and low running cost.”

Ecoplastic managed to overcome one of the largest obstacles; that is, to ensure the compatibility between the atomiser and the present equipment. The new atomisers from ABB will pay dividends for Ecoplastic in reduced cleaning and maintenance time, thereby reducing the annual operating cost by a staggering 60% – a clearly huge benefit and a great outcome for the service team.

In one of its latest projects, B+R Maschinenbau has implemented a robot-supported treatment system from ABB at the Russian plant of an automotive fuel tank supplier.

Plastic has become a widely accepted material for fuel tanks in passenger cars all over the world. While as much as 60% of all tanks in Asia are already being made of plastic, in the US the rate is nearly 90%. In Europe it is more than 95%. Plastic tanks have several advantages over fuel tanks made of steel: they are lighter, non-corrosive and can be better adapted to conditions of the vehicle floor in production. Normally, plastic tanks are made of high-density polyethylene (HDPE), and they are manufactured using the extrusion blow-moulding process.

The tank blanks themselves are hollow bodies and have a complex formation. These blanks are further treated during several manufacturing steps before installation in the vehicle. For this purpose, openings for the fuel pump and various valves are produced first to then be able to weld on all the necessary fixtures. B+R Maschinenbau designs and builds systems on which the blanks are processed. 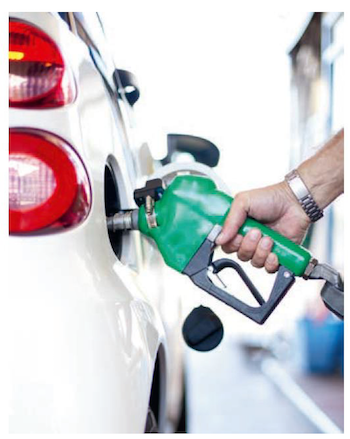 Around 60% of all tanks in Asia are produced in plastic, in the US and Europe the rate is 90-95%
In one of its latest projects, the company from Königswinter, Germany, has implemented a robot-supported treatment system for the Russian plant of an international automotive supplier, which processes fuel tanks from plastic for passenger cars. B+R offers complete post-processing for injection-mould and blow-mould technology from a single source, and is among the leading suppliers of special-purpose machines for sub-contractors in the automotive and packaging industries.

“The system is made up of three machining stations with changeable part fixtures, and is designed for the flexible production of a variety of tank versions,” says Jörg Müller, head of purchasing and production at B+R Maschinenbau. “The fuel containers can be inserted manually, or optionally using a robot.” A total of five IRB 6700 are used in the system. Their main tasks involve cutting out openings and welding on fixtures from plastic.

For each tank version, an IRB 6700 needs to produce several sections of varying sizes, which makes tool changes necessary. These are done automatically by the robot during the machining cycle.

“The tool with which the robot makes the fuel pump cut-out, as well as the welding units which are used on the second and third machining stations, weigh between 50kg and 60kg. The IRB 6700 handles these tools without any problems,” says Frank Wellershaus of ABB. “In addition, its high rigidity ensures precise machining.

Two IRB 6700s each at stations two and three carry out the welding process.

Since more than two fixtures are welded to each fuel container, the welding operations are divided into two stations so they can be carried out in one machining cycle. Two IRB 6700s are used at each of the two stations. With the use of a heating element, the tank and fixture to be welded on are heated at the joints and then joined by applying equal regulated force.

Precision is key above all else in the work the robots do. “Since, with the exception of the cut-out for the fuel pump, we also perform welding on the points we cut out, the repeated accuracy of the robot is a decisive criterion,” Müller emphasizes. “In this regard, the ABB robots meet the requirements of our customer: lock, stock and barrel.”

The robot-supported machining system supplied by B+R provides the automotive supplier with a highly flexible solution to process plastic tanks.The possibility of tool changes and the variable product fixture ensure that in the future, additional tank versions can be produced on the system. Given the increased variability, the trend in the automotive sector is currently moving generally toward flexible lines.