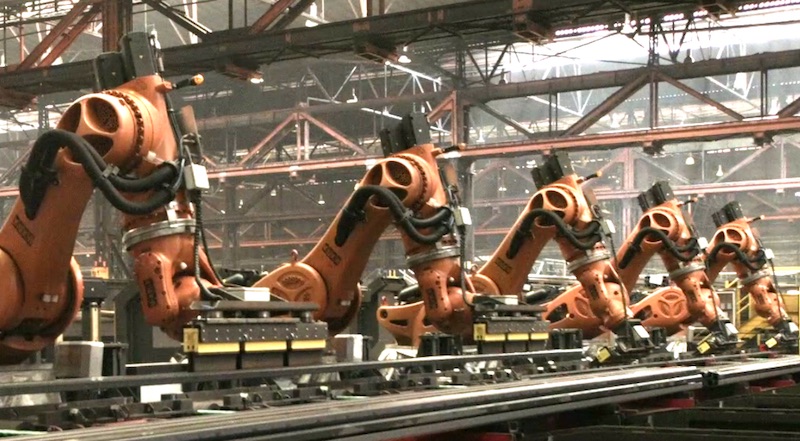 Based in Troisdorf in the German state of North Rhine-Westphalia, Mannstaedt can trace its origins back nearly 200 years. Today, the company is part of the Georgsmarienhütte Group and specialises in the manufacture of hot-rolled special steel profiles – tailor-made steel bars for use in the manufacture of finished products in the automotive industry and a diverse range of other markets.

At Mannstaedt, individual designs are manufactured according to customer requirements but for the final step in the production process, the company was in search of an automation solution for the stacking of the finished special profiles.

To begin, it was necessary to clarify whether robots or a linear gantry would be used. The lower costs as well as the higher loads that can be moved with robots spoke in favour of that particular solution. Then load capacity clinched the argument for the robots since Mannstaedt, as part of its changeover in production, wanted to manufacture special profiles of up to 26 metres in length – instead of the previous maximum of 16 metres.

“Through the changeover, we aimed to secure big advantages in terms of flexibility. Thanks to the longer special profiles, we can position ourselves well in the market for specialty steel products,” says Marcus Haas, Mannstaedt’s plant manager for hydraulics, cranes, energy and infrastructure. For nearly two years now, six Kuka robots – type KR 1000 titan – have stood in the production shop of Mannstaedt and stacked the special profiles.

With the change to automation, Mannstaedt aimed to better position itself in the market for specialty steel products

Big challenge for the robotsDescribing the situation as planning began, Haas notes: “Up to now, robots have rarely been used in steel production. The demanding and harsh working environment made it hard for them to gain traction in the industry.” As a result, a number of challenges had to be overcome for a successful changeover. The largest obstacle was the handling of the special profiles. Since Mannstaedt wanted to package steel bars of up to 26 metres in length after the changeover, the robots had to be able to handle loads of about 2.5 tonnes. The result was a process that to date remains unique worldwide. Beyond this, the conditions in steel production are anything but ideal for robots.

“In our production shop, the temperatures are the same as they are outdoors. In the winter, it gets pretty cold and that affects the robots,” says Haas. Cold is not the only problem. The ever-present steel dust also damages the machines. Finally, the third obstacle to be overcome was the changeover process itself. After all, as Haas recounts, the new system was installed during ongoing operation.

Robots used in steel production: a world firstCommitment to quality, as Haas explains, was behind the decision to choose Kuka as the implementation partner as well as the fact that Kuka already had experience in the foundry industry.

In the automated system, which has been in operation for two years, there are a total of six robots positioned next to each other. In the first work step, the special profiles are delivered to the robots’ workspace by a conveyor. The robots grip the bars, which are up to 26 metres long, by means of magnetic grippers.

For onward transportation, the robots then stack the bars on a stacking unit located behind the conveyor. Depending on the length of the bars, a corresponding number of robots perform the stacking. In this way, it is also possible for the robots to carry out the stacking in groups of three, thus enabling the work to be performed twice as fast.

"Up to now, robots have rarely been used in steel production… this system is an absolute success. With simplified methods, we have made production easier and more flexible" - Marcus Haas, Mannstaedt

Once the specified number of bars have been set down, the stack is moved forward by the next conveyor ready for shipment to the customer. The way in which the profiles are stacked depends on their shape. In the case of U-shaped profiles, for example, the robots alternately grip the workpiece from above and below. This enables efficient stacking.

KR 1000 titan: the heavyweight championThe requirements placed on the robot were clearly defined from the beginning: it had to move heavy loads, have a long reach and not be affected by the harsh conditions in the production shop. As a result, the KR 1000 titan robot was selected. The power pack from the heavy-duty robot series has a payload capacity of 1,000kg and a reach of over 3.2 metres. It was specifically designed for handling engine blocks, steel sections or components for ships. As a result, it can span distances of up to 6.5 metres quickly and precisely.

The six-axis robot weighs in at 4.7 tonnes. To ensure smooth operation of the robots, a large number of Mannstaedt employees received training at Kuka’s headquarters in Augsburg, Germany. The employees themselves can now perform any work required on the robots during maintenance or in the event of malfunction.

Robots conquer steel productionNow that the system has been in operation for two years, Haas can draw his conclusion: “The system is an absolute success. With simplified methods, we have made production easier and more flexible.” Thanks to the changeover, it is now possible to manufacture special profiles with lengths of up to 26 metres. This offers the possibility of producing up to 300 different shapes. On the heels of this successful implementation, the next robot project is already on the agenda at Mannstaedt. “We see further areas of application for robots at our company. We are planning upcoming robot-based automation for downstream activities such as in the area of logistics,” reveals Haas.www.kuka-robotics.com