Keeping up with demand 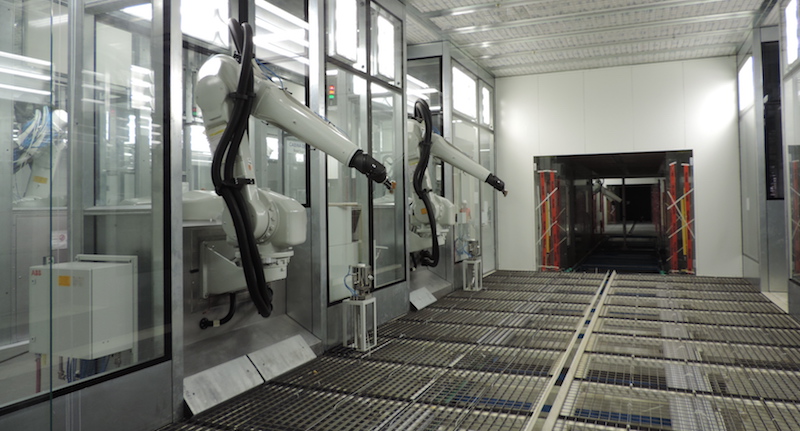 When Plastic Omnium (PO) realised that many of the world’s major vehicle manufacturers were upgrading or building new plants in Mexico, it decided to respond. The likes of GM, BMW, Nissan, Honda, Toyota, Mazda, Ford and others are busy increasing their presence and raising their production volumes in Mexico for the domestic and export markets. Gearing up for this rapid growth, PO has built a new paint line in its San Luis Potosi facility, designed to meet demand for exterior components that Mexico’s expanding automotive industry requires.PO is the world’s leading supplier of plastic and composite painted exterior components and modules. Its automotive exterior division supports customers worldwide with 74 plants in 18 countries.

Collaboration between countriesThe project is a fine demonstration of the strong collaboration between ABB and its customers across all borders. The project was awarded to ABB in the US but the installation and commissioning was carried out by ABB Mexico. Project managers from several countries worked closely together to overcome the challenges and ensure the new paint booths met PO’s needs ABB is a leading supplier of industrial robots, modular manufacturing systems and service. A strong solutions focus helps manufacturers improve productivity, product quality and worker safety. ABB has installed more than 300,000 robots worldwide and more than 2,000 in Mexico alone.

The project was awarded to ABB US but the installation and commissioning was carried out by ABB Mexico; a fine demonstration of the strong collaboration between ABB and its customers across all borders

In a separate enclosure, but inclusive of the mixture generator cabinet, the control electronics were installed including a flame safety relay, oxygen/gas analyser and microprocessor together with related switches, push buttons, etc. all pre-wired and tested. Also, an FTS series linear (8”) burner head complete with ignition and detection electrode, universal joint connection and flexible hose. Finally, a touchscreen display for process parameters and alarms, including diagnostic help pages for maintenance staff.

ABB has installed more than 2,000 robots in Mexico alone

Primer boothThe primer coat booth is equipped with an IRB 5500 six-axis process arm robots. Both robots were mounted on one side of the line, on pedestals. Each robot in prime coat is equipped with an AGMD-Pro non-electrostatic air atomised spray gun; with 2K gear pumps, mixers, and colour changers, mounted on the robot’s horizontal arm. The arm-mounted solenoids required to pilot the colour valves, 2K pumps, and the robot applicator are all handled through the robot controller.

Base coat boothThe base coat booth is equipped with three IRB 5500 six-axis process robots, mounted on one side of the line, on pedestals. All robots are equipped with the ABB RB 1000 Electrostatic rotary atomiser. Also, 1K gear pumps and colour changers were mounted on the robot horizontal arm of all base coat robots. The robot controller handles the solenoids required to pilot the colour valves, 1K pumps and the robot applicator.

Clear coat boothThe clear coat booth is equipped with two IRB 5500 six-axis process robots, along with the ABB RB 1000 electrostatic rotary atomiser. The 2K gear pumps, mixers, and colour changers, are mounted on the robot’s horizontal arm. The arm-mounted solenoids required to pilot the colour valves, 2K pumps, and the robot applicator and will be worked through the robot controller.

ControlsThe ABB supplied PLC and operator control console (OCC) for each booth downloads the appropriate program number to each robot controller as the parts reach the spray booth. As the parts are being conveyed through the spray booth, the robots will start their respective programs.

COMPAS is a Renault-Nissan and Daimler joint venture in Aguascalientes

The motor-control centres are integrated through System pro E power technology to safeguard personnel against electrical short circuits and to keep the system running with maximum efficiency and minimum maintenance and downtime.

ArTu “L”, the automated lighting panel integrates the new ABB i-bus KNX system that meets the highest requirements for applications in modern home and building control and is based on the proven KNX technology. ABB i-bus® KNX is a system supported by building controllers (lighting, sun protection, heating, ventilation and air conditioning) and intelligent networks that contributes significantly to the optimisation of energy consumption, simplification of building monitoring and maintenance.

Renault-Nissan and Daimler have stated that they intend to produce 1.1m vehicles per year at their new Mexican factory.